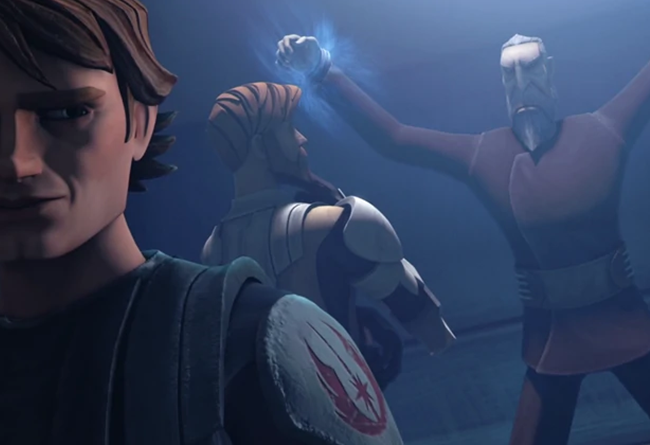 Manhunt!
After a long and perilous search, the
Jedi finally track down Separatist
leader, Count Dooku.

During a heroic attempt to capture the Count,
Anakin Skywalker has gone missing.
Having lost contact with Skywalker,
Obi-Wan Kenobi heads toward his
friend’s last known location, a lone
Separatist frigate in the far reaches of
the Outer Rim….

A while before Skirmish at Vanqor, Anakin Skywalker allowed himself to be captured by a Munificent-class star frigate, commanded by Count Dooku in an ice field near Vanqor. Once inside the ship’s hangar, he put up a fight in order to make his capture look convincing. He was defeated and taken to a prison cell. Obi-Wan Kenobi then infiltrated the ship to release him in order to help apprehend the Count. Dooku escaped in his solar sailer with the two Jedi on his tail in a Sheathipede-class transport shuttle. Direct hits on the solar sailor forced the Count to make an emergency landing in a wilderness on the nearest planet. When the Jedi suffered a hit from a droid fighter, they were forced to crash land, as well.

In a nearby cave, the two Jedi began to hunt for Dooku, but the Dark Lord of the Sith ambushed them by causing a sudden collapse in the cave ceiling, causing Anakin to lose his lightsaber, which Dooku retrieved. This distraction allowed Dooku an opportunity to exit and seal the cave with Anakin and Obi-Wan still inside. While the Jedi tried to find a way out, Dooku came upon Hondo Ohnaka’s pirate gang salvaging his ship. Outnumbered, the Count considered his options and chose to accompany the pirate gang on their ship off the planet as a ransom to the Separatists, or a prize to the Republic.

Meanwhile, the Jedi inadvertently disturbed “the mother of all gundarks” in the cave as they were trying to find their out. Finding the gundark, they concluded that they were on Vanqor. After rendering the gundark unconscious, they nearly succumbed to poison gas released from a trapped pocket in the cave just as Ahsoka Tano and a detachment of clone troopers uncovered the cave entrance.

After Supreme Chancellor Palpatine and representatives received a message from Hondo Ohnaka concerning a reward for the capture of Count Dooku, at the suggestion of Senator Padmé Amidala, the Jedi High Council assigns Anakin and Obi-Wan to meet with the pirates to verify that they do indeed have the Count in custody, agreeing to the condition that they must arrive unarmed. Upon arriving in the Twilight, the Jedi were met at gunpoint and escorted to Hondo, who arranged a meeting with their prisoner.

After Anakin and Obi-Wan entered Dooku’s cell and subtly mocked his current imprisonment, Dooku relished in the thought that the Jedi would soon join him in captivity. The Count warned that the Weequay were “devious and deceitful, and most importantly…stupid” and that the Jedi “underestimated them at their own peril.”

Upon leaving Dooku’s cell, the Jedi were “invited” to attend a banquet in the pirate gang’s grand hall, which the Weequay had no intention of letting the Jedi miss. Informing Mace Windu and Palpatine that Dooku was indeed being securely held by the pirates, Palpatine told them that he was sending Senator Kharrus and Representative Binks with the ransom in exchange for the Sith Lord.

The Jedi took their seat at the banquet and were provided with refreshments: drugged beverages. As Hondo made a toast to a successful transaction, the two Jedi switched their drinks with those of the Weequay and Nikto sitting next to them, returning the toast to an “alliance” with “powerful pirates and…new friends.” As their Weequay neighbors passed out from the drugged drinks that were switched on them, Anakin reflected on how drunken pirates were able to capture the Count when the Jedi could not. Obi-Wan tells him not to be too proud to accept the gift that came their way, whereupon Anakin made a toast to unexpected gifts.