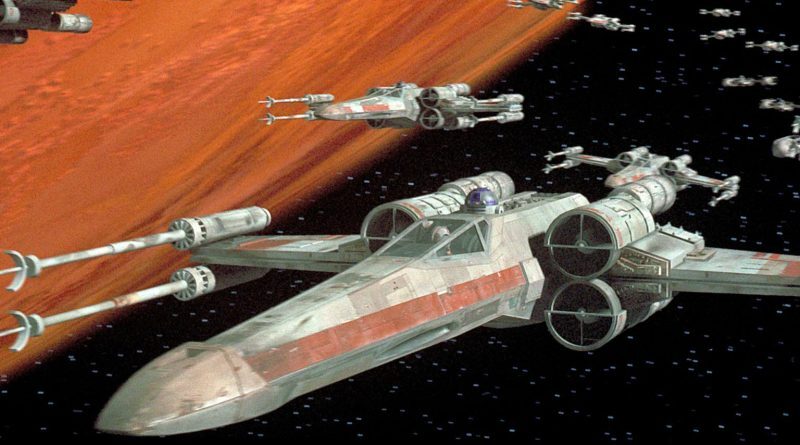 A starfighter, also referred to as a fighter, was a small and maneuverable spacecraft designed for combat in the atmosphere or space. Certain models of bombers, gunships, transports, light freighters, shuttles, trainers, and atmospheric fighters could be considered starfighters as well, and often fulfilled many of the same functions.

Although the term was most commonly applied to starships, it could also include certain low-altitude airspeeders.

Starfighters often had some degree of overlap with other ship classes, as well as a few distinct sub-classes. Bombers were starships designed to carry heavy ordnance payloads, often at the expense of maneuverability and straight-line speed. Interceptors represented a range of starfighters that usually emphasized speed and agility over versatility and firepower, sometimes at the expense of ordnance payloads, life support, or hyperdrive capabilities. Gunships were heavily-armed vehicles designed to deploy ground forces in landing zones created by their heavy weaponry. Their heavy armament often granted them considerable air-to-air or space-to-space combat capabilities, despite being optimized for air-to-ground combat. Certain classes of starfighters could be modified to trainers while still retaining combat capability. Certain classes of transports, shuttles, and light freighters, although more commonly used to move cargo and passengers around, could also pack considerable armament and maintain a degree of maneuverability.

During space combat, starfighters were capable of flying and fighting at speeds which would be incomprehensible in an atmosphere, crossing thousands of kilometers in a matter of minutes. Only the vastness of space and the relative speeds of those involved made flying at such velocities fathomable for many pilots. Even then, computer assistance was necessary for accurate piloting, as having your vectoring be wrong by one degree could easily result in a starfighter being kilometers off-target. Starfighters flying in tight formations relied on close communications between their navigational computers and astromech droids to maintain perfect distance.

While starfighters could function in an atmosphere at such speeds, it put tremendous strain on the ships and the pilots themselves. Systems would start to fail after just several minutes of such velocities, and laser cannons were at risk of melting from the heat generated by these maneuvers.

Starfighters had been an integral part of space-based combat for millennia, seeing action as early as the days of the Old Republic. However, with the formation of the Galactic Republic and the millennium of relative peace that followed, large-scale battles between opposing space-based combatants were completely unheard of.

Invasion of Naboo and Separatist Crisis

In 32 BBY, the Jedi Order operated the Delta-7 Aethersprite-class light interceptor, but primarily used them for personal transport instead of space combat.

That year, N-1 starfighters of the Naboo Royal Space Fighter Corps engaged and defeated the Trade Federation’s Vulture-class starfighters during the latter’s invasion of Naboo. A number of N-1s remained combat capable all the way through the end of the cold war. The Vulture droids also had a long lifespan, with some remaining operational in the Age of the Empire.

Also around that time, Darth Maul operated the Scimitar, a customized Star Courier that was also a formidable starfighter. It remained in service of the Sith Order well into the Imperial era.

Towards the end of the Separatist Crisis, Jango Fett owned and operated Slave I, a customized Firespray-31-class patrol and attack craft. After his death at the Battle of Geonosis, his son Boba took possession of the ship and continued using it until at least 3 ABY

During the Clone Wars, the Jedi continued utilizing the old Delta-7s, but also developed the Delta-7B Aethersprite-class light interceptor and Eta-2 Actis-class light interceptor. The clone trooper pilots under their command flew Low Altitude Assault Transport/infantry gunships, V-19 Torrent starfighters, BTL Y-wing starfighters, Aggressive ReConnaissance-170 starfighters, Clone Z-95 Headhunters, and Alpha-3 Nimbus-class V-wing starfighters. Grand Master Yoda operated his own customized Actis-class fighter. Skull Squadron, a Mandalorian unit serving the Republic, flew Fang fighters. At the conclusion of the Clone War, some of the Republic starfighter classes would be inherited by the Galactic Empire, while others would be decommissioned and fall into the hands of the rebellion. Others would be discarded entirely, seeing almost no military service after the conclusion of the war.

The Separatists, which opposed the Republic in the Clone War, mainly used Vulture-class droid starfighters built for the Trade Federation.[14] Later, to counter increasingly capable and diverse clone fighters, the Confederacy manufactured and deployed droid tri-fighters, Hyena-class bombers, and HMP droid gunships. The Separatists also built manned fighters for their organic commanders, such as Rogue-class starfighters, Belbullab-22 starfighters, and Ginivex-class fanblade starfighter. Geonosian forces, which allied themselves with the Confederacy, flew Nantex-class territorial defense starfighters, while the Umbaran Militia flew their indigenous Zenuas 33 Umbaran starfighters. The Zygerrian Slave Empire, which allied itself with the Confederacy, had a small force of Huttese HH-87 Starhoppers, which saw action against Republic forces on Kadavo. Death Watch, a Mandalorian splinter group allied to the Confederacy, operated Kom’rk-class fighters, which doubled as transports and bombers. After falling out of Count Dooku’s favor, Death Watch would pledge their loyalty to Darth Maul’s Shadow Collective, but would continue to use the ships in battle. After the conclusion of the war, many of the starfighters used by the Confederacy’s regular forces survived the Clone War and were used by rebels fighting against the Empire.

Age of the Empire and Rebellion

At the conclusion of the Clone War, the Imperial Military inherited some of the starfighter classes of the Republic Navy. By the time of the Galactic Civil War, however, it was reliant on the TIE line. This new generation of vehicles, powered by twin ion engines, were developed from technology used in the older Republic starfighter and transport classes. These craft included the famous TIE/ln space superiority starfighter, TIE/rb heavy starfighter, TIE Advanced v1, TIE/sa bomber, TIE Advanced x1, TIE/IN interceptor, TIE/D Defender, TIE/sk x1 experimental air superiority fighter, and TIE/rp Reaper attack lander. The Empire also deployed VT-49 Decimators and Y-45 armored transport haulers. In addition to Imperial use, numerous TIE/LNs were given to the Mining Guild and converted to TIE/mg Mining Guild starfighters. Imperial TIEs would occasionally fall into rebel hands, and the rebellion made good use of these opportunities.

Out of desperation for any equipment they could obtain, the rebellion operated numerous starfighter classes from a variety of sources. Bail Organa’s rebel network operated RZ-1 A-wing interceptors as early as 18 BBY. The Free Ryloth movement used old Separatist droid starfighters in 14 BBY. Berch Teller’s rebel cell also used Separatist fighters, in addition to Z-95 Headhunters. Beginning around 5 BBY,the Spectres made use of the Phantom, a customized Corellian VCX-series auxiliary starfighter that doubled as a shuttle and scout craft. The Spectres eventually joined Phoenix Cell, which utilized A-wings and a small number of RZ-1T trainers, which were A-wings converted into two-seat trainers. Jan Dodonna’s unit made use of decommissioned Republic Y-wings, which served as multi-role fighter-bombers. Later, the loose-knit network of rebel cells morphed into the better-organized Alliance to Restore the Republic, which continued to operate a fairly ragtag collection of whatever equipment they could acquire. The Rebel Alliance Starfighter Corps made use of A/SF-01 B-wing starfighters, E-50 Landseers, converted HWK-290 freighters, T-47 airspeeders, T-65B X-wing starfighters, T-65C-A2 X-wing starfighters, UT-60D U-wing starfighter/support craft, V-4X-D ski speeders, and at least one YT-1300 light freighter, in addition to some of the older classes. Additionally, the rebellion made use of stolen Imperial vessels. Many starfighter types used by the various rebel groups continued to see action with the New Republic.

A number of starfighter classes were used by private security forces, such as the Storm IV Twin-Pod cloud cars used by the Bespin Wing Guard.

The Resistance’s Starfighter Corps continued using T-70s donated by sympathetic senators. They also made use of a small number of single-seat A-wings and a few Z-95 Headhunters for covert operations. On occasion, Resistance personnel would steal First Order TIEs, just like their Rebel predecessors had 30 years before.