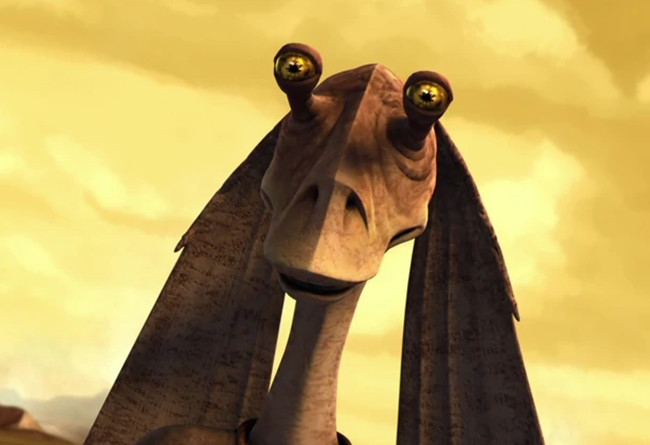 Dooku held for ransom! After
escaping capture by Jedi Knights
Anakin Skywalker and Obi-Wan
Kenobi, the villainous Count
Dooku fell into the clutches of
pirates led by the brigand Hondo
Ohnaka. Eager to get custody of
Dooku, the Republic agreed to
pay Hondo a hefty sum in exchange
for the Sith Lord.

But Anakin and Obi-Wan had not counted on the
treacherous cunning of Ohnaka and
his band….

Anakin and Obi-Wan wake up in the pirates’ prison cell, having been drugged the night before despite their precautions in the previous episode. They also discover that not only is their cellmate Count Dooku, but the three of them are chained together, making escape both far more difficult and – due to mutual antipathy – unpleasant.

Meanwhile, Jar Jar Binks and Senator Kharrus fly to the Weequay pirates’ lair with a bounty of spice on board as a ransom for Dooku. Unfortunately, Turk Falso decides to go behind Hondo’s back, since he thinks dealing with the Separatists would have been more profitable, and has his men shoot down the shuttle to sack the ransom for himself. The pilots and Kharrus die in the resulting crash, and Jar Jar subsequently gets unintentional command of the surviving clone crew.

With no choice but to work together, the two Jedi and the Sith try to escape to the hangar, but are caught and re-incarcerated. Obi-Wan then uses a mind trick to compel the guard to let them out and go out drinking. Unfortunately, while trying to pole-vault over a wall, Dooku’s line is shot; Obi-Wan grabs him, and Anakin is forced to hold onto both; they are re-captured by Hondo hanging from the wall.

Turk leads his band to hunt the survivors of the Republic delegation near the acid geysers. Jar Jar has the clones jump into a geyser, making the Weequays decide to let the acid kill them. Jar Jar is extremely confident, as the local fauna’s behavior determines when a geyser is about to erupt, which ultimately saves the group’s lives. Returning to the wreckage of the shuttle, they find that the spice ransom is gone. Though the clones think of waiting for reinforcements, Jar Jar plans to go after the pirates, riding the skalders to catch up. They intercept and defeat the pirates, and with the spice back in hand, they follow a series of power supply lines straight to the pirate base. Meanwhile, Hondo becomes increasingly annoyed at the Jedis’ attempts to escape and tortures Anakin and Obi-Wan with electricity, while Dooku remains locked in his cell.

Upon his return to the base, Turk lies to Hondo, saying that the Republic brought an army, and dispatches tanks after the clones and Jar Jar. Commander Stone sends Jar Jar to “negotiate,” knowing that the Gungan’s ineptitude will be useful. As the pirates take him hostage, Jar Jar accidentally rams one tank into another and subsequently shuts down the power grid. The Weequays attempt to kill him, only for the clones to hold them at gunpoint.

When the blackout hits the base, the Jedi and Dooku make their escape and go their separate ways: Dooku kills Turk and takes off in a ship; Anakin and Obi-Wan take Hondo hostage before meeting Jar Jar outside. Obi-Wan tells Anakin to let Hondo go, as they don’t have any quarrel with him since Dooku had escaped. Hondo commends the Jedi on their honor, but Obi-Wan reminds him that Dooku is likely to seek revenge on him, before the Twilight takes off.