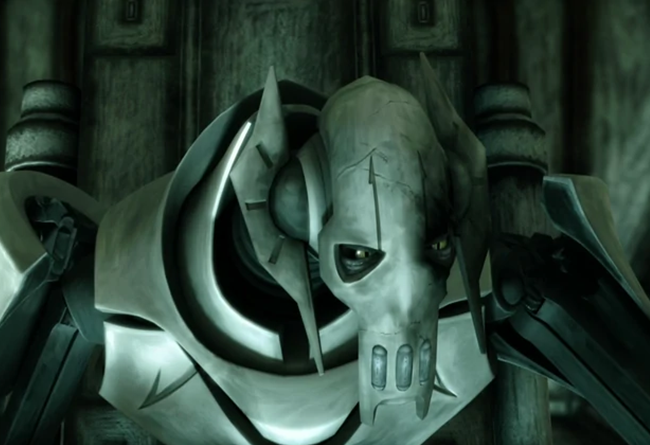 Viceroy Gunray escapes!
En route to Coruscant to stand trial
for war crimes, evil Separatist leader
Nute Gunray has broken free of his
Jedi escort. With the help of Count
Dooku’s sinister agents, the villainous
viceroy has made a daring getaway.

Alerted to the bold prison break,
Jedi Master Kit Fisto has traced the
stolen ship to a remote system,
hoping to recapture Gunray and
return him to justice….

Once alerted of Nute Gunray’s escape, Jedi Master Kit Fisto and his former apprentice Nahdar Vebb follow the tracking beacon of his stolen ship to Vassek. They find the ship outside a castle, but Gunray is not on board. The Jedi and their squad of clones find a secret door to the castle, and Fisto finds a way to open it. They attempt to sneak up on Nute Gunray, but all they find is a gloating hologram of the Neimoidian. It soon turns into a hologram of Dooku, who informs the party that although it can’t get Gunray, he will offer an “alternative prize.” Dooku soon contacts General Grievous and warns him that his ongoing stalemate in the war has become unacceptable and that Darth Sidious wants more dramatic results — more dead Jedi.

Upon discovering that the castle is the lair of Grievous, Fisto devises a plan to ambush Grievous as soon as he arrives. After landing his ship inside the castle, Grievous is confronted by the Jedi and the clones. A skirmish breaks out and Grievous’s legs are chopped off above the knees. As Grievous escapes, he kills two more clones before retreating to his control room to undergo repairs from his medic droid, EV-A4-D, and order his MagnaGuards to lock down the perimeter. Meanwhile, Fisto, Vebb and the remainder of their clone squad try to retreat from the castle, but Grievous locks it down. Fil tells the clones outside, Niner and Bel to contact the fleet at Bestine to bring reinforcements, but unfortunately, the MagnaGuards blow up the clones’ transport to cut off their escape and to prevent communications with the fleet. They also attempt to destroy Fisto’s starfighter and his droid, R6-H5, but Fisto tells the astromech to get out of the area, and R6 manages to pilot the fighter away from danger.

As they explore the fortress, a trapdoor on the floor opens beneath them and one of the clones is killed in the molten incinerator vat below. Fisto and Vebb jump in time to avoid it, and Clone Commander “Fil,” uses a cable to cling to the side of the pit and climb up. After being taunted by an hologram of Grievous, they meet Grievous’ pet roggwart, Gor. In a short battle, Fisto kills Gor, though Fil is also killed during the fight, an event that makes Vebb vengeful.

After Grievous is repaired, he decides to check if Gor has killed the Jedi, only to find that Gor is dead. He is then contacted by Count Dooku. This time the Count confirms to Grievous that this is a test for him since his defeats by the Jedi has shaken Dooku’s faith in the general. He decides to play along, and he and his guards go hunting.

Fisto and Vebb soon find the entrance to Grievous’ control room, but as they try to sneak in, Vebb chooses to confront Grievous instead, despite Fisto trying to convince him otherwise. In the midst of their argument, EV-A4-D locks Fisto away from Vebb and the Mon Calamari Jedi skillfully defeats all five of Grievous’s guards. Since Fisto is locked in the control room, unable to help Vebb, he finds EV-A4-D and cuts him in half. Vebb proceeds to attack Grievous, but the general shoots and kills the young Jedi. Fisto calls for R6-H5 to meet him at the south landing platform.

After an intense lightsaber duel with Grievous, Fisto starts to gain the upper hand, but some of Grievous’ MagnaGuards arrive, which turns the odds against him. As R6-H5 arrives with his starfighter, Fisto escapes and returns to the Jedi Temple on Coruscant.

Meanwhile, Dooku contacts Grievous, who tells Dooku how he has beaten the Jedi. Dooku already expected victory over the young Jedi and the clones, but says to best a Jedi Master is a worthy accomplishment. Grievous then clarifies to Dooku that Fisto got away. Dooku, disappointed, tells Grievous that there is room for improvement on his part, angering Grievous.

Back at Coruscant, Kit Fisto reports to Yoda and Mace Windu the events of his mission. He tells them, “Nahdar’s heart was in the right place, but he tried to match Grievous’ power with his own.” Yoda says that “in this war, a danger there is of losing who we are.“