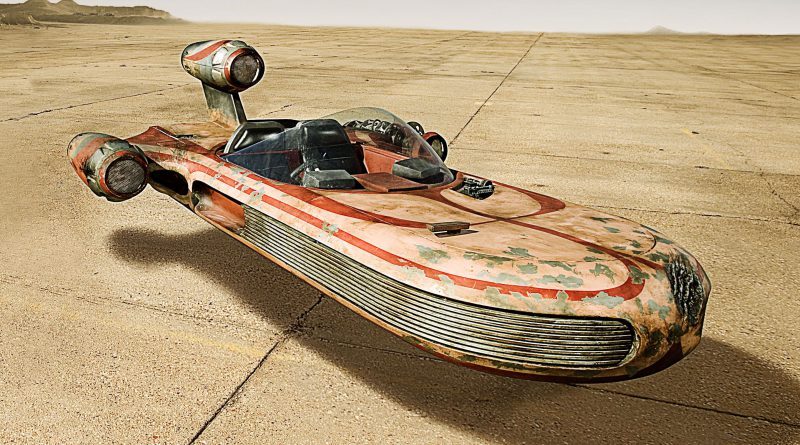 The predominant vehicle technology is called repulsorlift. Repulsorlift is preferred over more primitive thrust methods because it is quieter, cleaner and more efficient than other propulsion systems. By producing antigravity repulsor fields, these drives allow exacting control and high speeds or incredible cargo hauling capacity. The versatile repulsor power plant can be adjusted to run on a variety of easily found power sources, such as minerals, solar power and fusion, although power cells and energy generators are preferred because they produce the most power for the least mass.

Repulsorlift vehicles are also popular because they are not restricted to roads and other smooth pathways — a boon to frontier and poor planets that can’t afford funding for highway construction. Almost all atmospheric vehicles, and a majority of “ground” vehicles in the Known Galaxy, rely upon repulsor technology; primitive wheeled, hover and hydrocarbon burning engines are normally found only on the most primitive worlds, or on planets where repulsorlift isn’t feasible due to random gravity and radiation fluctuations.

Many high speed repulsorcraft, such as airspeeders and cloud cars, use ion engine afterburners to boost performance and speed, making them superior to many spacecraft in atmospheric performance. You will find those located in the Air section of vehicles.

Landspeeders are ground-based repulsorlift vehicles, common on planets around the galaxy. Most families and individuals own their own landspeeder, especially on non-urban worlds where there is very little public transportation.

Landspeeders are normally dependent only upon repulsorlift, although some competition and military models use ion engines for greater top-end speed. An average speeder flies around 200 kilometers per hour, although the fastest models can reach speeds in excess of 350 kilometers per hour. Speeders normally have a flight ceiling of less than five meters, so they are dependent upon smooth, well-groomed surfaces for smooth flight, such as natural flats, calm water or roads.

Landspeeders are built for many uses, including personal sport speeders, which are normally two-seater affairs, family speeders, with room for up to six passengers, and massive cargo or public transport speeders, which can carry hundreds of individuals and move several tons of cargo. They retain a significant sales edge over airspeeders due to their affordability.

These vehicles fill the need for small, fast personal transportation, and appeal both to youngsters around the galaxy and the military. They are normally single or two person craft, emphasizing speed and maneuverability over safety and protection.

Swoops are a very advanced development in repulsorlift vehicles — they achieve incredibly high speeds through a combination of repulsorlift and ion engine power, while completely sacrificing any protection.

They are much more difficult to pilot than speeder bikes, but in the hands of an expert, are much more effective, especially in high speed chase situations. Swoop racing is popular in the Core systems, where they are viewed as more refined than the extremely dangerous Podraces.

Most walkers are used as armored assault vehicles. Their sheer size and strength enable them to carry more armor and weapons than a similarly sized repulsorlift vehicle, and they can step over smaller obstacles.

These heavily armored vehicles use repulsorlifts to move about the battlefield. Although not maneuverable, they pack incredible firepower and can safely transport teams of troops into hostile territory.

Skiffs are used for any large cargo and relatively low-speed and low-altitude transportation. They tend to be slow and clumsy, and can be easily operated, even by low intelligence labor droids.

The Republic found walkers to be more useful than repulsor vehicles in many engagements, and the Empire took to them as their primary heavy land units. As the New Order first started transitioning from the Grand Army of the Republic to the Imperial Army, numerous new walker designs were tried, many of which proved too expensive for long-term use. In order to fill the need for heavy assault ground vehicles, the Empire often used wheeled and tracked (relics of the Clone Wars) to supplement their forces.

Each vehicle in this section has a variety of statistics that are useful in gameplay. Most of these vehicle codes are not necessary all of the time, but they provide valuable background data on the vehicle. Most of the time, it is sufficient to know the vehicle’s scale, skill, move, maneuverability, body strength and relevant weapon codes. The stats are presented in the following order:

Craft: The vehicle’s manufacturer, model name and number; also indicates whether vehicle is “stock” or “modified.”

Skill: The skill that is used to pilot the vehicle, followed by specialization. Example: Repulsorlift operation: airspeeder.

Unskilled: Some very specialized vehicles will have an “unskilled penalty” indicated: anyone piloting the vehicle without the correct specialization suffers the penalty indicated. Example: Repulsorlift operations: heavy equipment (unskilled: −2D)

Crew: The standard crew complement of the vehicle, followed by the gunners (in addition to the crew). The “skeleton” lists the minimum number needed to fly the vehicle, as well as the penalty added to all piloting difficulty numbers because of the skeleton crew.

Passengers: The number of passengers the vehicle can carry.

Cargo Capacity: The maximum mass of cargo that can be carried.

Altitude Range: For repulsorlift and flying vehicles only. The minimum and maximum operating altitude for the vehicle (Standard gravity and Standard atmosphere density worlds). Cost: The cost for a new vehicle of this type. Used vehicle prices will vary, depending upon the vehicle’s condition and equipment.

Maneuverability: This die code is added to the pilot’s roll whenever he makes an operation total, including for movement and vehicle dodges.

Move: The distance, in meters, covered by each move; the vehicle’s maximum speed in kilometers per standard hour.

Body Strength: The vehicle rolls this die code to resist damage in combat.

Shields: Some vehicles have shields.

Weapon Type: This list the number and type of weapon the vehicle has mounted. If a vehicle is listed as “fire-linked” it means that the stats given below are for all of the weapons linked to fire simultaneously.

Fire Arc: Front, back, left, or right. Turret-mounted weapons can fire in all arcs.

Crew: The number of crew necessary to operate the weapon. If there is no crew listing, the weapon can be fired by the pilot.

Scale: The weapon’s scale (if different than that of the vehicle).

Skill: The skill used when operating the weapon. Fire Control: This die code is added to the gunner’s skill total when firing the weapon.

SWRPGGM · 16 minutes ago
@swrpggm
The Final episode of Season 1 of 2 for Star Wars #Andor
https://t.co/bNB42CE4en
View on Twitter