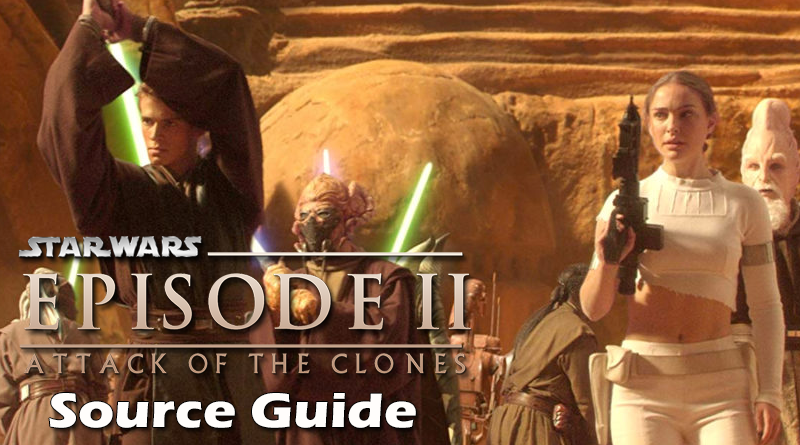 The Star Wars Episode II Attack of the Clones Source Guide is in development.

A decade after the events of The Phantom Menace, the Galactic Republic is in crisis. A Separatist movement led by former Jedi Master Count Dooku, alias the Sith Lord Darth Tyranus, is threatening the peace, causing the Galactic Senate to debate a Military Creation Act to form a standing army for the Republic’s protection. Senator Padmé Amidala, former Queen of Naboo, returns to Coruscant to vote against the Act, even though there are no longer enough Jedi to maintain peace and justice in the galaxy.

Upon her arrival on Coruscant, she narrowly escapes an assassination attempt that claims the life of her decoy, Cordé. As a result, Supreme Chancellor Sheev Palpatine requests that Jedi Knight Obi-Wan Kenobi and his apprentice, Anakin Skywalker, protect her.

That night, the assassin Zam Wesell makes another attempt on Amidala’s life, though the Jedi are able to foil her plot. They pursue her through Galactic City, eventually disarming her in the Outlander Club. Upon being questioned by Obi-Wan and Anakin outside the bar, she is killed by a saberdart, fired by a mysterious man, before the Jedi can learn the name of her employer. Returning to the Jedi Temple, Obi-Wan is assigned by the council to track down the assassin’s killer. Meanwhile, Anakin continues his task of protecting the Senator, and is asked to escort her back to her home planet of Naboo. Anakin welcomes the opportunity, as he often becomes angry and frustrated by Obi-Wan’s criticism, and is glad to have an opportunity to be on his own. Further, he has become infatuated with Padmé, and relishes the chance to spend time with her. Junior Representative Jar Jar Binks assumes the Senator’s duties in her absence.

During the investigation, Obi-Wan is led to a mysterious planet called Kamino—missing from the Jedi Archives—where he discovers a secret clone army being developed for the Republic. He is told by Prime Minister Lama Su that the army was ordered some ten years ago by Jedi Master Sifo-Dyas—although Obi-Wan was “under the impression” that Sifo-Dyas was killed before that time. A bounty hunter named Jango Fett was hired as the template for the clones. Obi-Wan meets Jango on Kamino, and believes him to be the killer he has been tracking. He tries to capture Jango, which leads to a titanic one-on-one fight between them. Jango makes use of his blasters and missile equipment, managing to defeat Obi-Wan by sending him plummeting into the raging sea below. Thinking he is dead, Jango departs Kamino with his son Boba. Unable to capture Jango, Obi-Wan places a homing beacon on his ship, Slave I, and follows him to the planet of Geonosis.

Meanwhile, Anakin and Padmé have been spending much time together on Naboo, enjoying each other’s company and playfully frolicking in the fields. Eventually, Anakin reveals his deep love for her, vowing to do whatever she requests. However, Padmé resists, explaining that it would be impossible for the two of them to be together, since she is a Senator and he is a Jedi. Anakin is angered by this, and experiences inner conflict between his strong desires for her and his duties as a Jedi.

Anakin is also troubled by a newfound sense that his mother is in grave danger, and he beckons for Padmé to accompany him to his home planet of Tatooine—in the process disobeying Obi-Wan’s orders to remain on Naboo. Upon arriving, Anakin tracks down his former owner Watto, from whom he learns that his mother has married a moisture farmer named Cliegg Lars, and travels to the Lars moisture farm. There, Anakin and Padmé find C-3PO, and the droid introduces Anakin to his step-brother Owen. Cliegg tells Anakin the horrible truth, that his mother was kidnapped a month ago by a pack of Tusken Raiders. Anakin travels through the night, and finds her tied and beaten in a Tusken camp. Within moments, she dies in his arms. Enraged and heartbroken, he slaughters the entire Tusken community: men, women and even children. Back at Coruscant, Yoda senses a terrible darkness in the Force as the slaughter continues (Qui-Gon Jinn’s voice can also be heard shouting “Anakin, Anakin, no!” during this scene). Anakin then brings his mother’s body back to the homestead, where her funeral is held.

On Geonosis, Obi-Wan overhears a meeting between Count Dooku and the leaders of the commerce guilds, and learns that they are behind the separatist movement and have built up a new droid army. He also learns that it was Nute Gunray who ordered the assassination of Amidala, as revenge for the defeat of the Trade Federation at the Battle of Naboo. Obi-Wan transmits his findings to the Council, relayed by way of Anakin and Padmé’s ship, though he is surrounded by droidekas and captured before he can finish his report.

Now that the Jedi council knows of Dooku’s army, Jedi Master Mace Windu leads a team to Geonosis. Unbeknownst to them, Anakin and Padmé also make their way there to rescue Obi-Wan. Meanwhile, Representative Binks calls for Chancellor Palpatine to be given emergency powers, with which he can call the recently discovered clone army into battle.

Back on Geonosis, Count Dooku tries to persuade Obi-Wan to join him, warning him that Darth Sidious is now in control of the Senate. Obi-Wan refuses to believe him, saying that the Jedi would have known if that was the case. Anakin and Padmé arrive on the planet, but are quickly captured by Jango Fett and sentenced to death, joining Obi-Wan in the Geonosis arena, where they are to be executed. In the high stands, Count Dooku, Nute Gunray, Rune Haako, Poggle the Lesser, Jango Fett and Boba Fett watch the start of the planned execution. The trio are forced to battle a reek, a nexu and an acklay. During their struggle, Mace Windu arrives with his Jedi strike team, and they battle Dooku’s droid army in the arena. Upon seeing so many Jedi in one place, Jango Fett jetpacks down to the arena floor, and engages Windu. After a short struggle, Windu manages to kill Jango due to his jetpack malfunctioning, but defeat for the Jedi still seems imminent. Yoda unexpectedly arrives with the Republic’s new clone army, but only a handful of Jedi had survived. Those killed include Sta-Den Eekin,[3] Sephjet Josall, Sar Labooda, Khaat Qiyn, Que-Mars Redath-Gom, Fi-Ek Sirch, Nicanas Tassu, Coleman Trebor, and about 160 other Jedi.

An even larger battle erupts outside the arena between the Republic’s clone army and the Droid Army of the Confederacy of Independent Systems. Nute Gunray and Rune Haako subsequently retreat in Gunray’s ship. Poggle the Lesser entrusts Count Dooku with the early plans for the Death Star. Dooku attempts to escape, but Obi-Wan and Anakin track him to a secret hangar, where they engage him in combat. Unfortunately, they are no match for Dooku’s now-revealed mastery of the dark side and the lightsaber combat style that he employs. He fires Force lightning at Anakin, injures Obi-Wan and cuts off Anakin’s right arm. Yoda appears just as Dooku is about to escape, and the two masters of the Force go head-to-head in a fierce duel. Dooku, realizing he can’t defeat Yoda, attempts to topple a large pillar on Obi-Wan and Anakin as a distraction. While Yoda uses the Force to divert the pillar, Dooku flees in his solar sailer. Flying to an industrial sector of Coruscant, he meets up with his master, Darth Sidious, who is pleased that the war has begun as planned.

In the Jedi Temple, Obi-Wan, Mace and Yoda ponder Dooku’s warning that Darth Sidious is controlling the Senate. Yoda is hesitant to believe this, stating that the dark side is capable of creating fear and mistrust. He and Windu agree that they should nevertheless closely monitor the Senate. Meanwhile, Chancellor Palpatine and a number of senators, including Bail Organa, oversee the launching of massive clone trooper forces.

Back at Naboo, Anakin, with a new mechanical arm, and Padmé hold a secret wedding, with C-3PO and R2-D2 as the only witnesses.