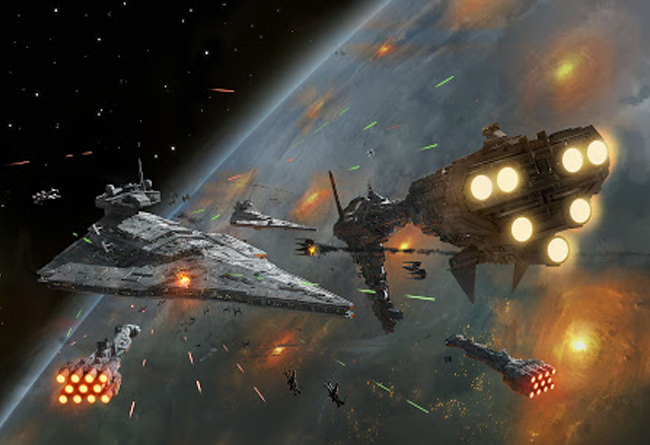 Capital ship was a general term that referred to any armed military starship that had a length greater than one hundred meters. Ships of this class ranged from small and nimble corvettes like the Corellian Engineering Corporation CR90 corvette to titanic Star Dreadnoughts, such as the Kuat Drive Yards Eclipse.

Ships of this class were typically designed for fleet warfare, often positioned in armadas stationed in high orbit around a strategic planet. They usually formed the primary attack groups in most fleets. There were, however, a few exceptions to the typical definition. For example, the Sienar Fleet Systems GAT-12 Skipray Blastboat was considered a capital ship because of its heavy armament, despite being a mere twenty five meters in length and operating primarily in the role of a heavy assault starfighter.

These vessels were commonly fitted with ship-to-ship and anti-fighter defensive weaponry, ranging from heavy ion cannons to turbolaser turrets. Many capital ship classes also served as carriers and were able to deploy starfighters, landing craft, and other resources as required.

Given their size, capital ships employed relatively numerous crews, employing in some instances thousands of beings. An example was the Imperial-class Star Destroyer, which was 1,600 meters long and required a crew of 37,000 to operate at full efficiency. There were also examples that utilized a much smaller number of active personnel, whether by means of advanced control systems or simply necessity, as in the cases of the Katana fleet and the Errant Venture, respectively.

However ships could sometimes be moved up or down in classification, depending on their armament and intended role. As an example, the Carrack-class light cruiser would fall into Frigate classification with its length of just 350 meters, but due to its armament and role, it was sometimes moved up into the cruiser category.