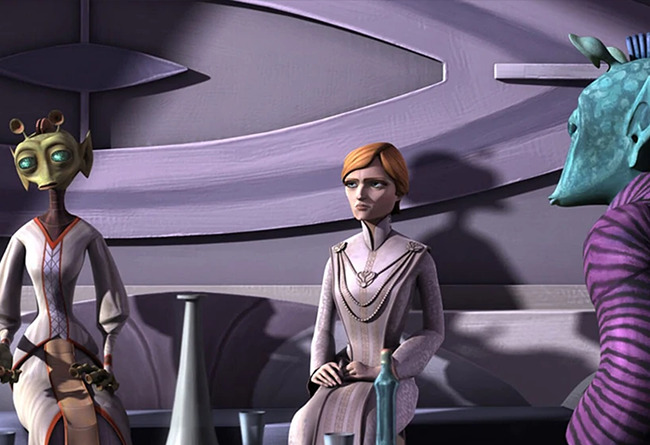 SENATE MURDERS
War on many fronts! While battles
are fought by clones in the field,
a different war is waged in the
Galactic Senate. As heavy losses
add up, a group of senators led by
Halle Burtoni of Kamino propose an
escalation of troop production.

Senator Padmé Amidala, recognizing
that more troops will only prolong
the fighting, works tirelessly with
her allies to introduce a bill to
cut down military spending and stop
the creation of more clone troopers….

Padmé’s party loses another Senator’s support, who was worried about public opinion. However, Onaconda Farr is optimistic that they win this matter. When Padmé goes on the floor of the Grand Convocation Chamber in the Senate, she reasons that increasing clone production would only strain the Republic’s finances and only lead to more bloodshed. She advocates that if they put a stop this, then they can return to the use of diplomacy. Everyone applauds her speech as a result. However, when she exits her hover platform, Senator Mee Deechi comments on her performance, though not as a compliment, just considering it unpatriotic. Padmé retorts that the only unpatriotic thing she finds is his advocating war.

Padmé, Bail Organa, Farr, Lolo Purs, and Mon Mothma celebrate with drinks. However, their celebration is rudely interrupted by Senator Halle Burtoni, who accuses them of being Separatist supporters for opposing the production bill. Padmé and Lolo protest that they were only trying to return to the use of diplomacy, to which Burtoni claims had failed the Republic long ago. Farr ushers her out, reminding her that though the Kaminoans’ contribution with the clones may have gotten them into the Republic, it does not give her free reign around the Senate. Burtoni leaves anyway, but not before warning that the war will not end soon. As the Senators toast, Farr suddenly collapses and dies.

Later, Farr is a given a funeral, before being transported back to Rodia. Padmé tries comforting Lolo, who was Farr’s protege, before they are summoned to Chancellor Palpatine’s office, where multiple police droids are. Inspector Tan Divo explains to them that Farr was murdered, instantly killed by poison. He believes that some secret of his came out and one of his political opponents decided to eliminate him. Padmé and Organa insist that Farr had no secrets and even his enemies respected him. Divo states that he will carry out this investigation his way.

Padmé and her group try speculating who would want to kill Farr and if they are next. However, Padmé decides to investigate this alone, though Mothma advises that Organa accompany her, while the bill is delayed. They both go the most likely suspects: Deechi and Burtoni. However, their opposition denies doing so, as they respected Farr and considered his words a cause for more credits to their fundraiser for the bill that increases clone production. Deechi slips a tip to Bail and Padme that the night before Farr died, he had a clandestine meeting at the docks; when asked how he knew, Deechi states that though he and Farr were political enemies, he respected and would not kill him.

Padmé and Organa arrive at the docks, only to be attacked by a hooded figure, who shoots at them atop cargo containers. Their attacker escapes by releasing a container right by them after a chase, knocking Organa off and leaving him dangling on the edge. Padmé is forced to help him, just before Coruscant Security Force arrives. Divo isn’t happy that they took matters into their own hands, as now the killer is alerted to their presence. Padmé then realizes that Deechi must have set them up. The three return to Deechi’s office, only to find him dead with a dagger to his chest.

Divo puts the Senators under protective custody, in case the killer is after them. Lolo however, refuses to cooperate and walks out. Divo then asks the others who else knew that they were at the docks. When Padmé states that Burtoni was the other Senator, Divo goes to her office, only for his droids to inform him that she had already left. When he returns to the Senators, Lolo comes rushing in, stating that Burtoni had attacked her. Coruscant Security Force arrests Burtoni, who denies murdering Farr or attacking Lolo, as she saw no political gain in doing so. Divo attempts to trick her into confessing, putting together that she conveniently was in both Padmé and Deechi’s office and may have been at the docks. He further presents a datapad detailing the poison that was used to kill Farr was Kaminoan-made that only affected Rodians.

Despite Burtoni’s protests, Divo orders her to be taken away, seeing that all the evidence points against her. Padmé, however, quickly pieces together the clues, realizing that Lolo would also have died unless she drank too. Found out, Lolo takes Padmé hostage with a small blaster. She reveals that she killed Farr because of the “war” he brought to Rodia, believing that they needed a new leader after showing his “weakness.” Padmé argues that he just made a mistake, but she refuses to listen to reason. When she heard that Deechi learned about the meeting at the docks, she had to kill him too. Divo discreetly activates the police droids outside the officer, who surprise the traitorous aide. Padmé knocks the blaster out of Lolo’s hand and delivers a knockout punch.

Later, the bill for clone production has been passed. Padmé runs into Palpatine in the halls of the Senate, who tells her that the reinforcements will help further their way to peace. 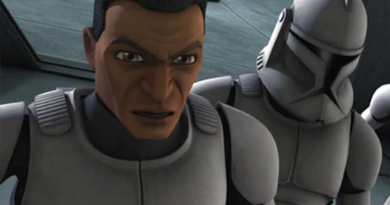 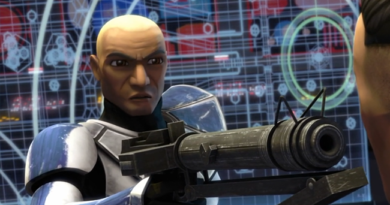 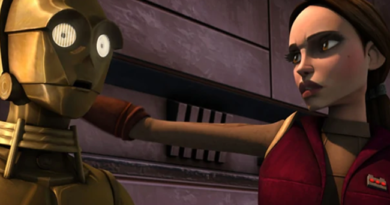