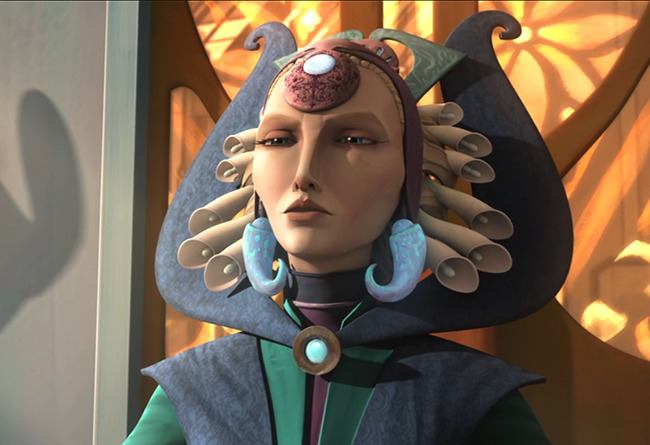 Background: A human female, was 1.77 meters tall and had short blond hair, piercing blue eyes, and pale skin. Kryze had a slender build and defined features. Satine always took care to present herself with dignity, and she reflected that in her appearance. Satine specifically wore rich colors and floral-inspired designs that were reminiscent of the forests and lakes that once populated Mandalore’s surface. Her elegant clothing was not worn out of vanity, but was strategically chosen to reflect Mandalore’s past beauty and remind those who saw her of what the planet once was and what it could still be.

Strong-willed and ambitious, Duchess Satine Kryze was an avowed pacifist and was committed to nonviolent actions throughout her life. Her peaceful ideology was formed from her experiences during the Mandalorian Civil War, a harrowing experience after which she dedicated herself to changing Mandalorian society for the better. Satine’s reforms brought about an era of peace and prosperity that Mandalore had never before experienced. Kryze was so devoted to her ideals that she was willing to die for them and often put herself in danger to help others. Even with her ambitious goals, however, Satine was unwilling to push others to align themselves with her and instead acted only with the help and consent of her constituents. Kryze cared deeply for her people and was distraught whenever hardship befell them. Despite the difficulties she faced and the threats levied against her, Satine remained convinced that change was Mandalore’s only hope for a future.

Although she was successful in keeping Mandalore and its people out of the Clone Wars, Satine faced deception and issues at home early into the conflict. Three of her most loyal and prominent allies betrayed her during the war, two of whom had already been plotting against her for years. The first was Governor Vizsla, who Kryze had seen as an honorable man before the revelation that he was the secret leader of Death Watch. Despite his betrayal, Kryze refused to believe that he could be capable of killing innocents and that he only wanted to harm her and her administration. Shortly after Vizsla’s betrayal, Senator Prince Tal Merrik attempted to take Satine hostage and murder several Republic dignitaries aboard the Coronet. Satine was blindsided by Merrik’s betrayal but could not bring herself to kill him when she had the chance. Satine was most outraged and hurt by the betrayal of Prime Minster Almec, whom she had suspected of corrupt practices but was willing to give the benefit of the doubt. Almec’s actions, unlike those of Vizsla or Merrik, had led to the death of innocent civilians, which Kryze saw as the ultimate betrayal of the people’s trust. Although each betrayal challenged the duchess, she was able to keep herself headstrong by raising an eyebrow at everything around her in the name of her people’s well being.

Kryze was greatly sympathetic to all life forms, including those that threatened her life. Following the failed assassination attempt on her life at Peace Park, she approached the dying Death Watch bomber and spoke to him in Concordian, comforting the man in his final moments despite what had happened earlier. Satine likewise disapproved of Obi-Wan’s brutal handling of several members of Death Watch. Satine was initially reluctant to believe that Death Watch was anything more than a group of thugs, though after their exposure as a militia, she realized the threat they posed to her and her government. Just as with Vizsla, however, Satine also knew that they wouldn’t harm the Mandalorian populace and only would hurt her and officials in her government. The epidemic brought on by Almec’s smuggling ring brought out a stricter and more emotionally impulsive Kryze, who was determined to solve the mystery behind the corruption around her before more lives were lost. Kryze uncharacteristically threatened both the school administrator and Captain Ru-Saxon with violence and punishment if they disobeyed her orders, even ignoring Senator Amidala’s pleas for the duchess to calm down. The arrest of Almec restored both Kryze and Mandalore to a place of peace, although Vizsla would soon reappear and disrupt Kryze’s reign. Vizsla’s Shadow Collective-backed coup against Kryze was successful in making her look weak in the eyes of the distraught and frightened Mandalorians, and Kryze willingly surrendered to Vizsla in order to keep her beloved people from facing more bloodshed.

Satine was a strong-willed and determined politician, and as such was a gifted public speaker and showed strength in analyzing her surroundings. She managed to hold her own before the Galactic Senate, even when under pressure by Supreme Chancellor Palpatine and Vice Chair Amedda. Although she abhorred violence and abstained from the opportunity of violence whenever she could, Satine had some skill in combat and could hold her own in a fight, even against the skilled Death Watch warriors. Satine additionally always carried a deactivator hold-out pistol, which fired an energy blast that could deactivate droids. When Obi-Wan questioned her choice to carry a weapon with her, she reasoned that even though she was a pacifist she was not unwilling to defend herself. Among her other abilities, Kryze could drive speeder bikes and could evidently fly aircraft; when Obi-Wan attempted to free her from imprisonment following Vizsla and Maul’s coup, she was ready to take control of the Twilight but did not have the time to do so. Satine was also very resourceful and was able to correctly program the controls in the Concordia mines to free Obi-Wan from the conveyor belt despite the extreme circumstances. 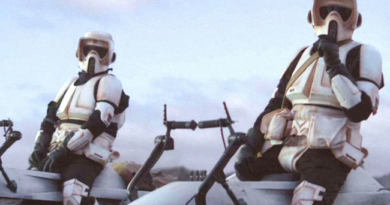 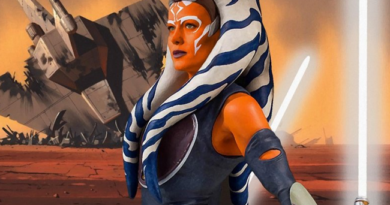 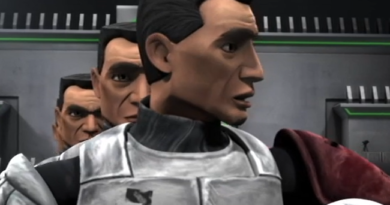