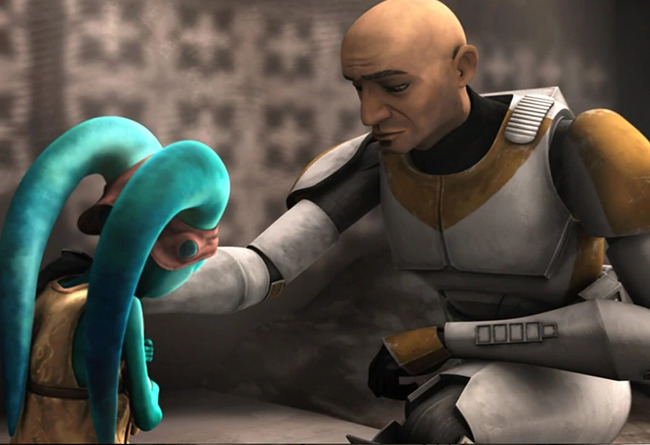 Aboard an Acclamator-class transgalactic military assault ship, Mace Windu tells Obi-Wan Kenobi as he boards the Crumb Bomber that when he takes the city of Nabat they’ll have their landing zone for the ground assault forces. However, Wat Tambor anticipates this, and Tactical droid commander TX-20 readies his five proton cannons, while using captive Twi’leks as a “living shield” to further protect them, estimating that the Jedi will not risk a heavy attack.

Obi-Wan and Clone Commander Cody brief Ghost Company on their mission, and while they must retake the city, they cannot destroy the Twi’leks’ home, and are allowed to use only blasters and droid poppers. Above, the Acclamator assault ships are attacked by the proton cannons below. Commander Ponds states to Windu that the fire is penetrating their shield. Windu tasks Obi-Wan with taking the cannons out so that the larger transports can land. The Crumb Bomber lands with the other gunships, and Obi-Wan and Ghost Company move towards Nabat. Droid gunners on the outskirts of Nabat pin down Ghost Company. Obi-Wan and two troopers, Waxer and Boil, utilize droid poppers to take out the droids in the bunkers.

After losing contact with the droids on the village’s outer perimeter, TX-20 sends two recon droids to find out the Jedi’s plan, while Obi-Wan dispatches Cody, Wooley, Waxer and Boil to scout ahead. Waxer and Boil head south, while Cody and Wooley go to the courtyard. The latter discover the Twi’leks being held hostage in the cannons’ immediate vicinity. Obi-Wan, speaking to Windu via hologram, explains that the hostages will make the mission difficult but not impossible and hits upon a plan to disable the guns without letting the hostages come into any danger. Unfortunately, a recon droid broadcasts their conference to TX-20, who recognizes Kenobi and begins researching his opponent, finding the Jedi is known for deceptive movements.

Waxer and Boil stumble across the young Twi’lek orphan Numa, who at first is fearful of them. After they remove their helmets, Numa relaxes a bit; she calls them both “Nerra,” and takes a ration bar that they give her. Waxer and Boil move out to finish their scouting, Waxer doing so reluctantly, but Numa follows the two clones. Waxer is still worried about her, while Boil tries to keep him focused on the mission. Numa somehow gets ahead of them and leads them to a shattered building that was once her home. Waxer and Boil, moved by the losses the war has inflicted upon the child, take it upon themselves to keep her safe.

TX-20 reveals his plan: to use starved gutkurrs to take out the Republic forces. Back at the Republic camp, Cody has noticed Waxer and Boil’s absence, and broadcasts a transmission to contact them. Seeing the Republic troops on the move, TX-20 orders the gutkurrs released. The two clones receive the transmission and, realizing that they are severely late, they try to brainstorm possible excuses. However, the gutkurrs suddenly appear, and the two clones and Numa rush back into the house. Numa shows the clones an escape passage, and they run into the underground tunnels just in time.

Meanwhile, Ghost Company is attacked by the gutkurrs. Obi-Wan uses the Force to lure the creatures into an alley bordered by a bridge. Cody and his men fire at the bridge, and the gutkurrs are trapped, while Obi-Wan leaps out. Though the clones defeat the creature, TX-20 knows that their numbers are very thin. Suddenly, Waxer and Boil emerge from a hatch in the street nearby, with Numa in tow. Obi-Wan converses to Numa in Twi’leki, who agrees to lead them to the prisoners while Cody and his men create a diversion, with Obi-Wan, Waxer and Boil freeing the Twi’lek prisoners. After Obi-Wan frees the prisoners, Numa is reunited with her uncle, Nilim Bril. However, a battle droid reports the rescue attempt, and TX-20 turns his AAT around.

Obi-Wan takes control of a proton cannon, and with the help of Waxer and Boil, he manages to destroy the other cannons. However, a blast from TX-20’s tank destroys their cannon and knocks the three to the ground. Numa runs to her clone friends and huddles close to Obi-Wan, even as he tries to push her out of the line of fire. TX-20 targets Obi-Wan and Numa, laughing evilly and gloating that Obi-Wan has lost. Incensed by the threat to Numa, the Twi’leks rush out of hiding, swarm over the tank and tear TX-20 to pieces with their bare hands – a possibility the hyper-intelligent droid has not foreseen, as evidenced by its last words, “does not compute… does not compute…!”

The Acclamator transports land, and Mace Windu commends Obi-Wan on his victory. However, their new objective is much harder: to take the Ryloth capital of Lessu and free this world. Waxer and Boil say goodbye to Numa. As the army heads toward the capital, Numa calls “Nerra!” out to Waxer and Boil again, and Obi-Wan translates: “Nerra” means “brother.” Smiling, Waxer and Boil turn and wave back at Numa, before moving out toward the sun, intent on freeing this world.

SWRPGGM · 5 hours ago
@swrpggm
Hey @DisneyPlus why are you preventing me from using your service unless I provide detailed personal information that I have no desire to share with you. This makes me want to #unsubcribe
View on Twitter
0
0

SWRPGGM · 11 hours ago
@swrpggm
Episode titles for #TheBadBatch were released today with the trailer. https://t.co/5sLFypPdTj
View on Twitter