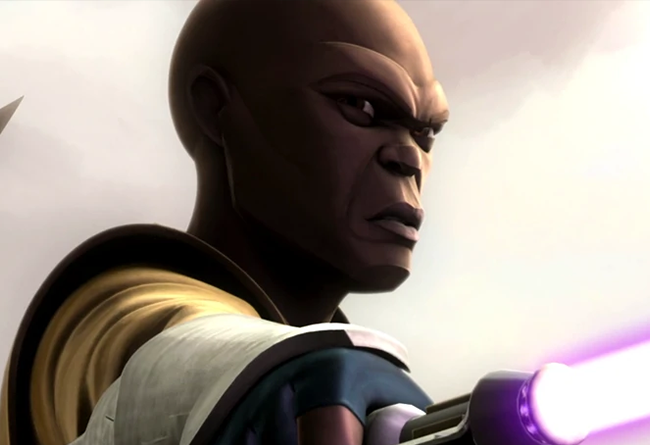 LIBERTY ON RYLOTH
Republic victory is at hand! Clone
troopers under the command of the
Jedi have successfully invaded the
Separatist-occupied world of Ryloth.
Anakin Skywalker battles the enemy
in the skies, while Obi-Wan Kenobi
frees villages from the grip of vile
Separatist leader, Wat Tambor. Now,
Jedi General Mace Windu leads the
attack on the enemy lines in the final
offensive to liberate the capital city
of Lessu….

As Mace Windu and his forces head to Lessu along a cliffside path with AT-TE walkers, they are ambushed by several AATs. The tanks incapacitate the first walker in the line and then target the rear walkers, seeking to trap and destroy the Republic forces. Mace saves the gunner, and then Commander Ponds comes up to him and informs Windu that they’re pinned down. Windu and Ponds orders Lightning Squadron to the front while Windu Force-pushes the first fallen walker off the cliff, clearing the path. Lightning squadron is deployed from the AT-TEs and moves up to the front. Mace, Commander Ponds and the rest of Lighting Squadron then overrun the tanks and the droids using AT-RTs and grenades. Afterwards Ponds tells Windu that they have lost thirty-two men along with command crews of three walkers. A recon droid spies on Windu and Ponds, discovering that the Republic forces will reach Lessu sooner than expected and that they will need help to take Lessu.

Watching the stream at his command center in Lessu, Emir Wat Tambor confers with his Tactical droid, TA-175, refusing to retreat, despite the odds being against him. Tambor states that Windu doesn’t have the troops to take the city. Tambor orders that all droids to be brought into the city and to secure the bridge. In a holographic conference aboard Windu’s lead AT-TE in his column, Anakin Skywalker informs Mace, Supreme Chancellor Palpatine, Yoda, Admiral Yularen and Senator Orn Free Taa that his fighters have the space around Ryloth secured. Mace mentions that Obi-Wan has taken the Jixuan desert, and that the southern hemisphere of Ryloth is secure; the only thing that remains is to retake Lessu. Republic spies are certain that Tambor has his command center there. Yoda asserts that when they have taken the city, they must capture Tambor, but Mace is unsure if that is possible: Tambor has chosen his stronghold well, and with the only way in or out of Lessu being a plasma bridge, a siege could drag on indefinitely. With republic forces stretched thin, Mace decides to enlist the help of the Twi’lek Resistance under the command of Cham Syndulla. Chancellor Palpatine states that Syndulla was a radical before the war and can be very unpredictable. Senator Taa mentions that before the War, they were political rivals, and still are. Senator Taa states that Syndulla seeks to gain power. Windu will leave the politics to Senator Taa, but Windu will do what he must to help his people. Palpatine requests reinforcements to be sent instead, but Admiral Yularen informs him that none are available. Mace states the Republic can’t win without Syndulla’s help.

Mace and two members of Lightning Squadron discovered the site of a massacre, accompanied by Twi’lek graves. Mace discovers fresh animal tracks, and they hear the sound of one of the animals. Mace heads along with troopers Razor and Stak.

Meanwhile, Count Dooku informs Tambor that his tactical droid has informed him of the “pitiful job” he has done. Tambor insists that the droid has exaggerated, and asserts that he has not lost; Dooku states that Tambor is no match for Windu and orders him to retreat with what valuables he can and destroy everything else. Tambor is rather alarmed, but Dooku explains: Ryloth’s fate will demonstrate to the galaxy the cost of a “Republic victory.” Mace and the two troopers come across a patrol of battle droids looking for another lost patrol, but instead of defeating them, Mace allows the rebels to attack them. They come across the freedom fighters, but Cham Syndulla is rather adamant against giving his help to the Republic.

TA-175 notifies Tambor that their bombers are ready for launch and states he will ready Tambor’s ship for evacuation. However, Tambor is not yet ready to leave. Mace, Razor and Stak accompany Cham to his hideout under a wrecked C-9979 landing craft. Mace mentions that they can stop another massacre from happening, but Cham states that when the droids invaded, the Republic was unable to help, and they were forced to surrender. Then the Separatists brought tanks to exterminate them. Stak examines a blurrg, but after it snaps at him, Tae Boon chuckles and mentions that his blurrg is faster than their riding machines, though Stak is doubtful.

Despite his misgivings about the Republic, Cham displays the tradition of the Twi’leks to give their guests whatever food and drink they still have. The Separatist bombers launch, and Tambor targets all the villages with in range, starting with the inhabited ones. Ponds leads his troops and the AT-TEs to a village where he plans to spare some of their rations to the hungry Twi’lek women and children in the village, but the village is suddenly blasted to bits by the bombers. Cham tells Mace that he doesn’t trust Senator Taa. Despite the fact that the clone troopers will stay for a while after the war to ensure security and keep the peace, Cham insists that another armed occupation is not a free Ryloth. Syndulla asks how long will it be before he’s fighting the Republic and the Jedi. As the two receive a report from Ponds about the destroyed villages, Cham decides that he will speak to Taa.

Tambor oversees the loading of valuables onto his shuttle by Twi’lek slaves. A droid tells Tambor that two more transports are still coming in from the south sector, thus Tambor decides to wait for the last of the valuables of the world to arrive and be loaded onto his shuttle, much to the fury of Dooku, who wants him out of the city before the Republic arrives: once Windu has invaded the city, Dooku orders it to be bombed from afar. TA-175 will do so, despite what Tambor wants. Cham and Senator Taa engage in a holographic conference and begin to verbally spar; Mace regulates the conference, and Anakin reports that his fighters are trying to destroy the bombers, but there are too many. Mace instructs him to destroy the bombers and then meet him at the capital, and Anakin continues to engage the bombers with assistance from his Padawan Ahsoka Tano. With assistance from Mace, Cham and Taa reach an agreement: Taa will not let Ryloth fall to another armed occupation, while Cham promises he will not seek power, and rallies his men.

Meanwhile, battle droids escort the civilians of Lessu to the outer wall to slow Windu down. As Mace and Cham discover this, they spot two MTTs making their way toward the city. Cham reports that his spies say that they are filled with stolen treasure, and they decide to use them to get across and activate the bridge despite the chance of being scanned. Mace, Razor and Stak slice a battle droid on a STAP and enter the rear transport, while Cham prepares to lead the attack. Mace orders Ponds to create a diversion and get Lightning squadron ready. The plasma bridge is activated for the transports, and they begin to cross; Tambor prepares to leave with the last of the treasures. However, the battle droids scan the transports, and they pick up an anomaly in the second transport. As the droids open the transport’s doors, Mace and the troopers exit the transport and destroy the two battle droids, while the Republic forces begin to open fire. The bridge is deactivated, and Mace uses the Force to push Razor and Stak across. Mace uses an STAP to get to the other side, and battle droids begin to attack the three. Mace orders the troopers to get the bridge back up while he holds the droids off, and Cham begins his charge. Mace takes out an entire droid squad and a tank on his own, while Razor and Stak get the bridge up just in time for Cham, Ponds and their forces to cross. The citizens of Lessu wave happily at the passing freedom fighters; Mace instructs Cham to take care of the droids while he finds Tambor. The freedom fighters and Lightning Squadron take out the AATs and the droids quickly.

In the control room, Razor and Stak are ambushed by several battle droids and two commando droids but they defeat them. TA-175 lifts off in the shuttle without waiting for Tambor, much to the latter’s surprise. TA-175 reports to Dooku regarding Tambor’s refusal to retreat in time. Despite this unfortunate setback, Dooku gives the order for the bombers to destroy the city immediately. Mace subdues Tambor’s two super battle droid guards and holds Tambor at bay. Tambor tries to reason with the Jedi but Windu refuses since he has the upper hand. Tambor then states that a surrender is unnecessary since the bombers are coming and they both will perish for the glory of the Separatist Alliance. While the bombers approach, Anakin and Ahsoka attack and destroy them. Freedom fighters and clone troopers surround Tambor. Tambor then asks Cham for his terms of surrender; Cham states that they are unconditional, and Tambor reluctantly agrees. Syndulla thanks Windu for freeing his world. Later, Cham and Senator Taa wave to the people in a parade with both the freedom fighters and the clone forces with Windu and Ponds watching in satisfaction. Ryloth is free.