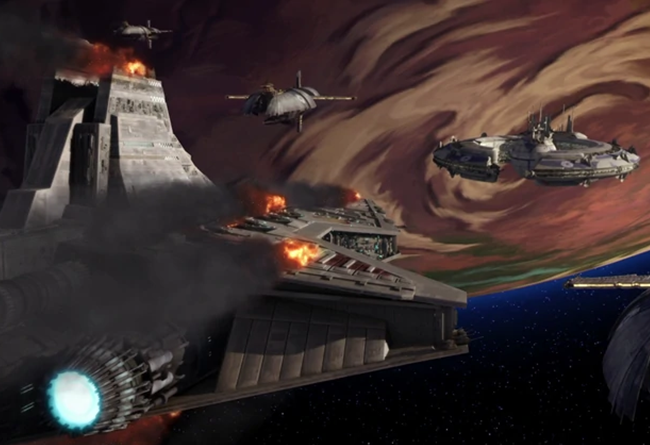 Planet Ryloth invaded! Subjected
to a brutal droid occupation, the
people of Ryloth are starving
under the blockade of a Separatist
fleet. Evil Separatist leader Wat
Tambor now rules with an iron
fist.
Answering a plea from the
Senate, the Grand Army of the
Republic mounts a bold offensive
to liberate the system. It is up to
Anakin Skywalker and his
Padawan Ahsoka to make way
for Obi-Wan’s ground assault….

Aboard a Lucrehulk-class Battleship flanked by two Munificent-class frigates over Ryloth, Neimoidian Captain Mar Tuuk receives orders from Emir Wat Tambor, who emphasizes that the Republic can’t invade Ryloth. Mar Tuuk assures Emir Tambor that their blockade is impenetrable and that the Republic will get quite a surprise when they arrive. The Resolute, Defender and Redeemer arrive in the system. Ahsoka Tano boards her fighter, mentioning to her new droid R7-A7 that this is her first time leading a squadron. Anakin stops by to give her some encouragement, and Ahsoka leads her squadron out of the Resolute. Her squadron checks in, and receiving the order from Anakin and Admiral Yularen, she charges the Separatist blockade, leading Axe, Slammer, Kickback, Tucker, and Swoop.

After cutting a path to the lead Separatist ship, Ahsoka advances with her group. However, four more Munificent-class frigates suddenly jump out of hyperspace and join the blockade. Admiral Yularen and Anakin both order Ahsoka back to the ship, but she stubbornly insists on pushing forward. Tucker’s V-19 Torrent starfighter is destroyed by the advancing vulture droids, and Ahsoka finally obeys orders and turns back, but the Vulture droids begin to sacrifice themselves, ramming themselves into the Resolute. One droid heads for the cruiser’s bridge, and Admiral Yularen is severely injured. After losing Axe as well, Ahsoka and what remains of her squadron make it back to the Resolute. The Redeemer is too damaged to retreat and falls apart, but the Defender and the Resolute manage to jump to hyperspace.

In the hangar, Anakin orders a headcount to determine how many pilots were lost, and then reprimands Ahsoka for disobeying orders. Ahsoka learned this trait from Anakin himself, but still takes responsibility and is severely dejected that she lost so many men. Anakin tries to console her, stating that it was a trap and that it is the reality of war. Captain Rex informs Anakin that Jedi General Mace Windu is demanding a progress report, and he leaves the hangar.

Meanwhile, Tambor congratulates Tuuk on his success, but warns him not to underestimate the Jedi. Tuuk then orders a droid to bring him whatever archive data there is on Skywalker, seeking to learn more about his opponent.

Anakin reports his losses to Mace Windu and Obi-Wan Kenobi. Obi-Wan reminds Anakin to give his Padawan time to recover, but that he will need her help to complete the mission. Time is running short, and despite losing almost half his forces, Obi-Wan and Mace give Anakin one planetary rotation to breach the blockade or they’ll have to postpone the invasion. Anakin stresses that the Twi’lek people can’t wait much longer, and the invasion must go on.

Ahsoka sits with an unconscious Admiral Yularen and mournfully apologizes for her failure. Rex then calls her away to Anakin, whom she finds in the hangar bay, repairing her starfighter with the help of R2-D2. Anakin tells her they need to proceed with their attack on the blockade. Ahsoka, still shaken from her earlier failure, questions her readiness. Anakin receives a call from the Defender and orders Ahsoka back to her quarters to cool off. Meanwhile, Tuuk, certain Skywalker will counterattack, orders his droids back to their battle stations.

Alarms sound aboard the Resolute, and Ahsoka exits her quarters to find clone troopers running to stations. A clone reports to Ahsoka that the Defender is being evacuated for an unknown reason. When she arrives in the hangar, everything from the Defender is being loaded into the Resolute. Anakin credits Ahsoka with the inspiration to his latest plan: he proposes that he will pilot the Defender alone into the lead battleship, taking out the enemy commander and thus leaving only easily-outmaneuvered battle droids in command. Ahsoka thinks it’s a reckless plan, but Anakin leaves it to Ahsoka to command the remaining forces while he remains defenseless in an escape pod after destroying the Defender. Anakin leaves on a shuttle, and “Commander Ahsoka” is now in charge of the Resolute.

Ahsoka reports to the bridge of the Resolute. Anakin is ready to get underway. Rex and the Resolute’s clone navigation officer await orders. Tambor updates Captain Tuuk with information from Count Dooku that the Republic forces are too thin to mount an effective counterattack and that any attempt to do so would be suicide, but Tuuk still believes Anakin is coming, and basks in the opportunity to achieve fame for the defeat of such a great warrior. Ahsoka brings Rex and the navigation officer up to speed, and they are very skeptical of their chances of success. The navigation officer accidentally blurts out that they usually have Anakin to lead them; while he doesn’t mean Ahsoka any offense, she still realizes how much bigger her responsibility is.

The Defender emerges from hyperspace, and Anakin hails Captain Tuuk, offering to surrender himself and his vessel in exchange for safe passage of food and medical supplies to the people of Ryloth. Ahsoka details the battle plan after Anakin’s collision with the battleship. She intends to tilt the Resolute in a maneuver away from the frigates, using it as a screen to launch fighters that would then defeat the remaining ships. The navigation officer is doubtful, and suggests taking time to come up with a better plan. Ahsoka asserts that these are her orders, and that Anakin is counting on her, but then corrects herself and says that he is counting on them. Admiral Yularen returns to the bridge and supports Ahsoka, giving her much-needed confidence.

A battle droid reports to Captain Tuuk that scans of the Defender reveal it to be heavily damaged, with all power diverted to the forward shields, but there is only one life-form aboard. Tuuk realizes Anakin’s deception, and the Resolute emerges from hyperspace. Anakin heads the Defender straight for the Separatist flagship. Ahsoka heads off to command the fighter squadron, leaving Rex and Admiral Yularen in charge of the Resolute.

Anakin leaves the Defender with R2-D2 and boards an escape pod. Captain Tuuk orders all cannons to fire at the Defender, but it is already too close, and he escapes from the ship. The Defender pierces the center sphere of the battleship. The Resolute moves into position, and Ahsoka leads a squadron of Y-wing starfighters toward the blockade. The battle droids, leaderless and confused, manage to order a basic attack on the Resolute, but the Republic Y-wings and V-19 Torrents manage to rip apart the remaining ships in the blockade. Following this, three Acclamator-class transgalactic military assault ships carrying Obi-Wan, Mace Windu, and their troops emerge from hyperspace. Obi-Wan contacts Ahsoka, wryly commenting on the state of Anakin’s invasion fleet, and Rex dispatches a shuttle to pick up Anakin’s escape pod.