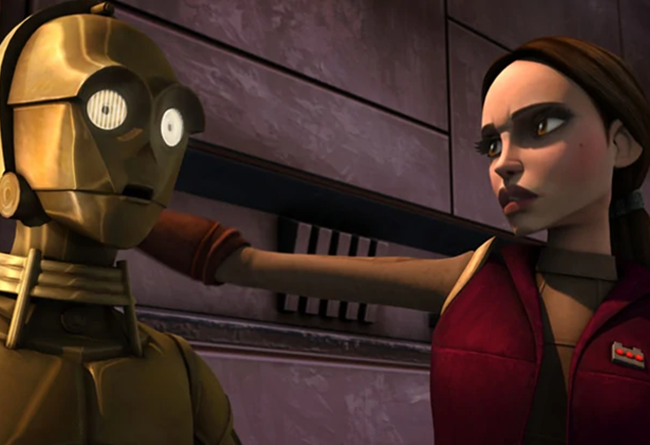 Grievous in retreat! Before the
battleship Malevolence could
destroy an Outer Rim clone
medical base, a Republic strike
force, under the command of
Jedi General Anakin Skywalker,
crippled the warship, disabling
its dreaded ion cannon.

During the Battle of the Kaliida Nebula, the Malevolence is left heavily damaged and trailed by three Star Destroyers. Unable to jump to hyperspace, Grievous is forced to buy time. Luckily for him, Darth Sidious and Count Dooku had arranged for Senator Amidala (with C-3PO in her company) to fly directly onto his ship, herself believing that she was heading for negotiations with the InterGalactic Banking Clan Supreme Executive. Once Padmé comes out of hyperspace, she is pulled into the warship via a tractor beam. She manages to contact the Republic forces, asking them to continue their attacks, regardless of her own safety. However, Anakin orders their ships to cease their attack.

Padmé rigs her ship’s engines to explode so that when Grievous comes on board to capture her, the galaxy would be rid of him. Unfortunately, he survives the blast and has his droids search for her and Threepio. Anakin heads a rescue mission composed of him, Obi-Wan and Artoo to save her. The Twilight then latches onto the Malevolence by an emergency air lock and they board the ship and manage to contact the senator, who gives them her location. They set a rendezvous point at the warship’s transportation system. They each get on separate trains. Anakin uses the Force to bring Padmé over to him because a super battle droid destroyed the rest of Padmé’s track. Their train goes into a tunnel, where they enjoy a brief romantic moment alone; Obi-Wan tries to get Threepio, but he gets hit by another train in transit. As they are about to kiss, Anakin is contacted by Obi-Wan about Threepio.

Anakin plans on rescuing him, but Padmé informs the Jedi that the hyperdrive is close to finishing; Obi-Wan goes to destroy the hyperdrive. However, Grievous learns of this and sends droids down to guard the drive. Meanwhile, Anakin and Padmé reach the bridge when the ship is almost ready to jump to hyperspace. They quickly destroy all the droids and rig the ship’s navicomputer. They then leave the bridge, hiding the broken droids before others could find out what happened.

Obi-Wan duels with Grievous after dispatching his droids and manages to avoid the cyborg’s clutches. He reaches the Twilight along with the rest of the group and as they leave the ship, Grievous pursues in his starfighter. The droids on the warship then try to jump to hyperspace, only to discover that Anakin rigged the navicomputer to set a course right into the moon. Grievous watches in horror as the ship crashes into a nearby moon, then flees the system.

While Grievous was not killed on the Malevolence, his warship is finally destroyed and Senator Amidala is rescued from the ship. The loss hurts Grievous’s credibility with Count Dooku, the former ending communications with the Count due to the shame of the ship being destroyed.

SWRPGGM · 6 hours ago
@swrpggm
Hey @DisneyPlus why are you preventing me from using your service unless I provide detailed personal information that I have no desire to share with you. This makes me want to #unsubcribe
View on Twitter
0
0

SWRPGGM · 12 hours ago
@swrpggm
Episode titles for #TheBadBatch were released today with the trailer. https://t.co/5sLFypPdTj
View on Twitter