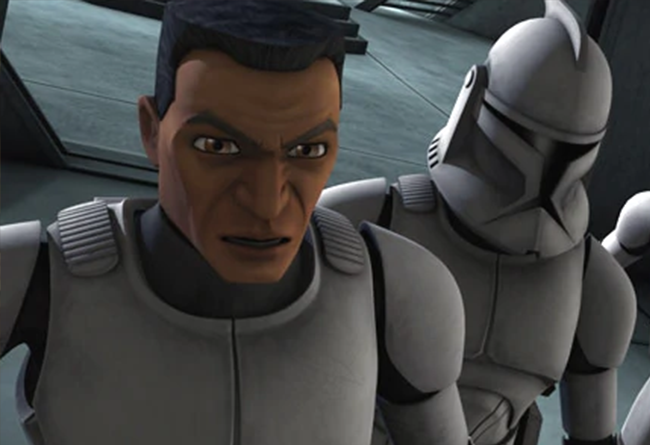 Clone forces rally! As the war
escalates in the Outer Rim, the
Jedi Knights are spread thinly
across the galaxy. Many new
clones are rushed into service
to support their Jedi generals.
Unfortunately, because of the
relentless demands of battle,
many young clones must join
the struggle before their
intensive training has been
completed. These clones,
manning a vital network of
tracking stations, are all that
stand between the Republic
and invasion…

On the remote Rishi Moon, a small unit of rookie clones stationed there, including Hevy, Echo, Fives, Droidbait, and Cutup are restless and deprived of battle. Echo reads reg manuals while Hevy daydreams of being on the front lines when Sergeant O’Niner reminds them that their listening post is vital in keeping an eye on Separatist activities and making sure they do not try to slip past and launch a surprise attack on Kamino, the center of clone production and training. The Sergeant orders his men to prepare for an inspection by Captain Rex and Commander Cody, who are en route. Soon after, the station detects an incoming meteor shower and prompts it to raise its shields. But the meteors aren’t all meteors—two of them are boarding ships carrying several droid commandos.

With brutal efficiency, the droids infiltrate the base and waste no time in executing Sergeant O’Niner along with three rookie clone troopers, forcing the remaining four clones to flee the base through the exhaust vent. The commando droids report their success to General Grievous. Pleased, Grievous contacts Asajj Ventress on Kamino, where she is making secret preparations for a Separatist invasion.

Hevy, Echo, Fives, and Cutup emerge from a maintenance tunnel into a deep crater below the outpost and plan their next move. Suddenly a massive Rishi eel silently emerges from one of the many caves in the crater, snatches Cutup in its jaws, and disappears back into its hole taking the other rookies by surprise. Just then Cody and Rex’s shuttle flies in for a landing high above. Hevy, Fives, and Echo are unable to make contact by radio, so they decide to use a warning flare.

Up on the platform the clone officers are met by a peculiar “clone” who gestures awkwardly and talks like a droid. The “clone” tries to convince them that the base is in perfect condition, though Rex demands to see the sergeant in-command. When the “clone” responds with “Roger, roger,” both officers become immediately suspicious before Rex spots the flare. Rex immediately shoots the impersonator, much to Cody’s surprise. Rex tells Cody to relax, as he takes the helmet off, revealing it to be a droid commando. The remaining commando droids soon ambush the two officers; in the ensuing firefight, they manage to destroy one of them before the captain and another droid toss thermal detonators which destroy their ship. Under the cover of the explosion, Rex and Cody escape into the crater where they meet up with the rookie clones; unsure if they are droids or not, Rex demands they take off their helmets. They do so, reassuring Rex. The eel returns for a second attack, but Rex kills it before it can strike. The two officers then explain to the rookies that they need to take the base with the “shinies.” Rex and Cody are determined to retake the base, and Hevy, Fives, and Echo are up for the task.

As they lack the weaponry to break through the blast doors, Rex comes up with an idea. Posing as a droid commando in disguise, he approaches the gate where three commando droids are standing guard. Unit 07 answers and notices that Unit 26’s vocabulator is off, demanding to see his faceplate. Rex dives down and picks up Unit 26’s droid head. Cody comments on how absurd the plan is, but Unit 07 takes the ruse and opens the gate. The three commando droids are surprised by Rex’s appearance and are gunned down by the group. They later storm the command center and retake it from the commando droids.

Unfortunately, the Confederacy navy led by Grievous has arrived, and when he can’t make contact with the commandos, Grievous sends down reinforcements. Not wanting the base to fall back into enemy hands, the clones resolve to blow it up with liquid tibanna, which would disrupt the all-clear signal, thereby alerting the Republic. As the other clones escape through the tunnels, Hevy tries to arm the explosives but the remote doesn’t work, so he decides to activate it manually. In a heroic last stand, Hevy is wounded. The droids are unsure of what to do with him, asking each other if they take prisoners; Hevy defiantly says that he doesn’t, and sets off the explosives. The base, along with Hevy, is destroyed. Alerted, the Republic fleet jumps into the system and Grievous is forced to retreat as he is outgunned.

When they return to the Resolute, Echo and Fives are granted medals and Rex inducts them in the 501st Legion. The rookies feel they don’t deserve the honor, but Rex says they’ve earned it.