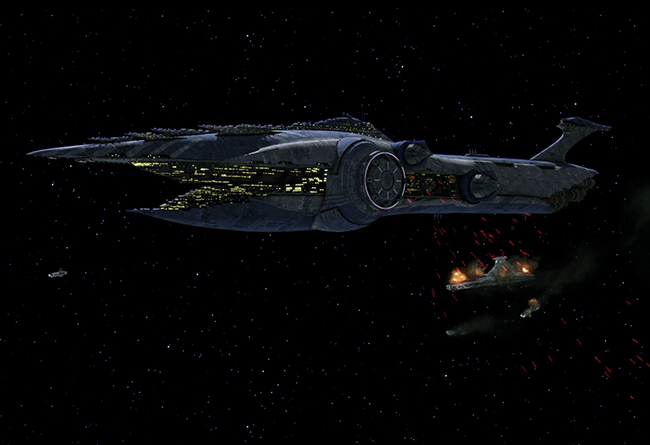 Game Notes: When the Ion Pulse Cannon fires, it generates an energy disc with a diameter of 10 space units that targets all starships on its fire arc, friend or foe alike. Ships may attempt a piloting roll to evade the pulse, but they suffer penalties due to the size of the pulse. Targets at Point-blank range cannot dodge, at Short range suffer a -15 penalty, at Medium -10 and at Long range -5. Due to their nimbleness, Starfighter-scale ships get to add their Space score to their dodge roll. If the Ion Pulse Cannon is Heavily Damaged while powering up for a shot, it automatically overloads and is destroyed.

Background: The Subjugator-class heavy cruiser was a model of heavy cruiser designed by Ruggle Schmong, who used a design initially discarded by the starship manufacturing company SoroSuub Corporation. The Subjugator was later built by Quarren engineers of Free Dac Volunteers Engineering Corps and Pammant Docks on the planet Pammant, where it was used by the naval forces of the Confederacy of Independent Systems during the Clone Wars.

Subjugators were potentially the largest, if not the largest, warships that served at the time of the war, stretching to over 4,000 meters in length, even more massive than the 2,177.35 meter-long Providence-class Dreadnought also used by the Confederacy. Its armament consisted of two primary mega-ion cannons—which were designed to disable entire squadrons of starfighters and sub-capital ships—along with hundreds of turbolasers, ion cannons, flak cannons, and other assorted weaponry. These vessels were operated by a crew of 23,350 officers, droids, and other enlisted crew, while also carrying tens of thousands of battle droids, as well as Vulture-class droid starfighters, Hyena-class Droid Bombers, several landing craft, ground combat vehicles, shuttles, and utility vehicles.

The Malevolence was one of two examples of a Subjugator-class model that was used as the flagship of the Kaleesh Separatist General Grievous and the initial testbed for the mega-ion cannon early in the Clone Wars. After a series of strikes on Galactic Republic fleets that left no survivors, the Malevolence was tracked to the Abregado system by Jedi Master Plo Koon, whose fleet was destroyed in the subsequent battle, but Koon and several clone troopers managed to survive the attack and report their findings to the Republic. Sometime later, the warship attempted to destroy the Republic’s secret Outer Rim medical station, but was stopped by a small strike force led by Jedi Knight Anakin Skywalker, which resulted in the destruction of the ion cannon and forced the Malevolence to retreat. Shortly thereafter, the dreadnought was destroyed by the Republic while making its escape after Skywalker sabotaged the ship’s navigation computer to send it crashing into the nearby Dead Moon of Antar.

Despite the Malevolence’s destruction, the Confederacy navy had maintained a small number of Subjugator-class heavy cruisers. However, as a result of the lead ship’s destruction, the rest of the class was held in reserve and were rarely deployed except in dire emergencies. 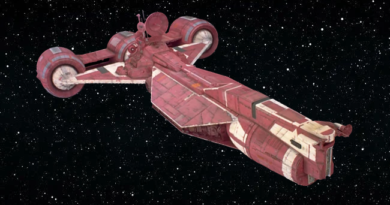 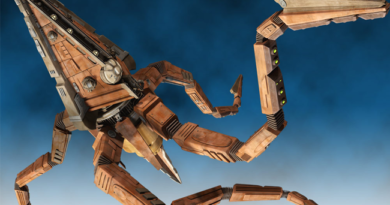