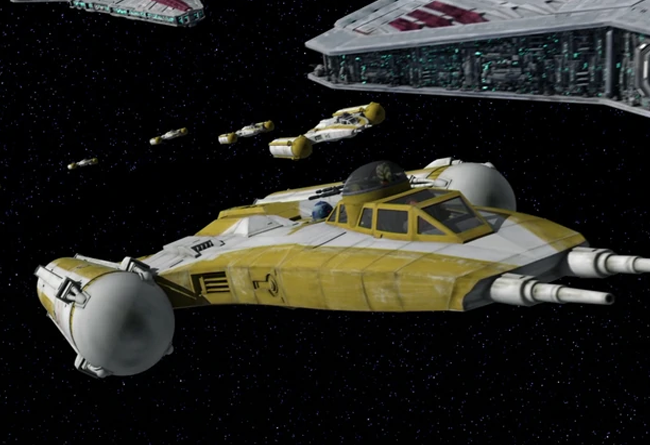 A deadly weapon, unleashed!
The Separatist battleship ”Malevolence”
advances unopposed through Republic
space, tearing apart any ship that
stands in its path.

After a daring rescue and narrow escape,
Anakin Skywalker prepares a counterattack
on the enemy ship and its diabolical droid
commander, General Grievous….

After several other attacks on Jedi fleet cruisers, all of which conducted by the Malevolence, Anakin Skywalker decides it is time to strike back. His plan is to use the new Y-Wing bombers to destroy the Separatist flagship’s bridge, killing General Grievous and destroying the ship. However, both Plo Koon and Ahsoka think that his plan is too aggressive. Meanwhile, the Malevolence destroys another supply convoy, somewhere in the Outer Rim. After finishing off the final ships, Dooku contacts General Grievous and gives him a new target: the Kaliida Shoals Medical Center.

Admiral Yularen contacts the Kaminoan physician Nala Se on the Medical Center, warning her of a possible attack. However, she does not believe that they will have enough time to evacuate all of her 60,000 wounded patients.

Anakin and Ahsoka leave their Venator-class Star Destroyer with their squadron of Y-wing bombers, along with the Kel Dor Jedi Master Plo Koon serving as a fighter escort in his modified Delta-7B Aethersprite-class light interceptor. After a hyperspace jump, Anakin’s Shadow Squadron of clone trooper pilots reach the Kaliida Nebula. While traveling through it, Master Plo is horrified to learn that they are taking the Balmorra Run.

Before they can turn around, though, they fly into a nest of Neebrays. Shadow Squadron is able to navigate through it, although Matchstick’s ship sustains damage to its port engine. Just as they reach the Kaliida Medical Center, the Malevolence comes out of hyperspace. After it fires its ion cannon at Shadow Squadron, Anakin loses almost half of his Y-wings to its disabling blast and is forced to make a new plan of attack. The Malevolence then prepares to target the medical center.

As its mega-ion cannon charges, Shadow Squadron opens fire on it, causing the ion cannon to backfire when General Grievous tries to unleash it once more on the medical station. The blast also damages the ship’s hyperdrive, preventing it from escaping into hyperspace. With newly arrived Republic capital ships led by Obi-Wan Kenobi and Admiral Yularen firing on him, Grievous orders the wounded flagship back to Separatist-held space. Anakin and the rest of Shadow Squadron then board the medical station, where they are congratulated by Nala Se. Anakin, however, mourns the losses of his men among Shadow Squadron, despite the great victory their lives had earned.