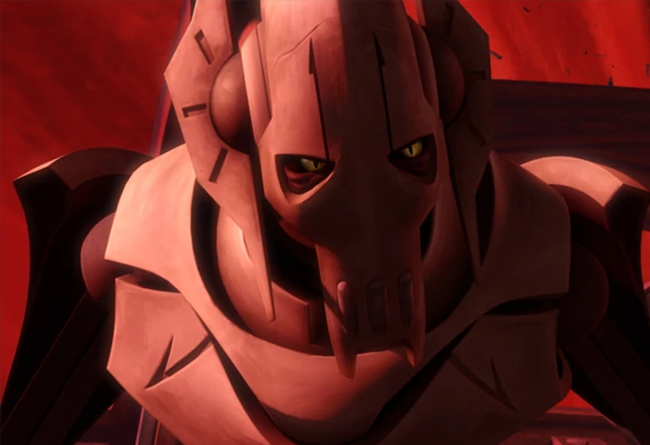 The clone star fleet is under siege!
Dozens of Republic warships have
been destroyed in merciless surprise
attacks that leave no survivors.
Rumors spread of a terrible new
Separatist weapon.

In the face of growing fear, the
Jedi Council sends Master Plo Koon to
hunt down the menace before
it strikes again….

Aboard the Triumphant, Jedi Master Plo Koon and Clone Commander Wolffe locate the Malevolence in the Abregado system and immediately move the fleet into position to engage it. Before attacking, Plo orders Commander Wolffe to contact Coruscant and relay their position; he then contacts Anakin Skywalker and Ahsoka Tano, who are stationed in the nearby Bith system, telling them that he has found the Malevolence and requires reinforcements. Anakin tells Plo that there is little he can do, as he has been ordered by the Jedi High Council to protect the Bith system.

The Triumphant’s communications are then jammed by General Grievous at the behest of Count Dooku. The Malevolence’s massive ion cannon fires, knocking out power on all three Republic attack cruisers, and leaving them defenseless against Grievous’ turbolasers. Plo Koon, along with clone troopers Sinker, Boost, and Commander Wolffe, manage to board an escape pod, just before their cruiser is destroyed. Aboard the Malevolence, Dooku orders Grievous to deploy the pod hunters, in order to find and kill any survivors and keep their secret weapon’s position a secret.

Meanwhile, Anakin and Ahsoka inform Masters Obi-Wan Kenobi, Mace Windu, and Yoda, and Chancellor Palpatine, about the loss of communication with Plo Koon. All four tell Anakin and Ahsoka not to go out to the Abregado system to look for survivors, despite Ahsoka’s vehement objections. Mace tells Anakin that all their task forces have been assigned to defend their supply lines. After the meeting, Anakin scolds Ahsoka for her outburst of insubordination. Nevertheless, a short time later, they take off for the Abregado System in the Twilight. Huffily, she asks why she got scolded for wanting to do what Anakin has, in fact, decided to do. He explains that he always intended to look for survivors, but will obey the spirit of the Council’s orders by leaving his fleet on station.

Back on Coruscant, Obi-Wan, who knows Anakin all too well, guesses that Anakin has gone off alone, and both he and Palpatine issue repeated demands for Anakin to resume command of his fleet.

Back in the debris field, while attempting to fix their escape pod, Plo and the clones spot another pod. However, upon closer inspection, they realize it has been broken open and the clones inside have been killed by a pod hunter. The group then witnesses one of the pod hunters attack another nearby escape pod, breaking it open and killing all inside. Then the pod hunter crew notices their escape pod and latches onto it. Plo and his men fight and destroy the pod hunter, but this alerts Grievous that Republic survivors are still in the debris field.

Soon after Plo’s victory, Anakin and Ahsoka arrive and rescue him and his men. As they are preparing to depart, the Malevolence arrives near their location. Anakin and Ahsoka shut down the Twilight’s systems, hoping to blend in with the debris and avoid detection.

Unfortunately, they forget to shut down the on-board medical droid, whose faint signal alerts Grievous to their location. Forced to flee the blast from the ion cannon, the Twilight narrowly escapes with a desperate hyperspace jump. Grievous reluctantly informs Count Dooku that the survivors have escaped, meaning the Republic will learn of the Separatists’ secret weapon. Dooku, vexed, says he will have to contact his master.

Once the Twilight reaches Anakin’s fleet, Commander Wolffe thanks Anakin for assisting them. Anakin and Plo then contact the Jedi Council, informing them of the secret weapon and its capabilities. Anakin asks Ahsoka to come with him, claiming that they should both share the responsibility for their actions.