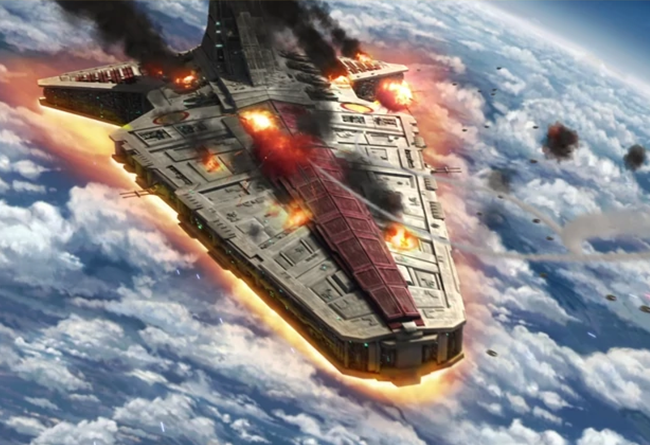 The Republic fleet is on the defensive
and pushed to the brink! As war rages
in the much contested Outer Rim
Territories, chaos and fear mount as
the Separatist army wages an epic
battle against heavily outnumbered
Republic ships in the far reaches of
the Quell system.

Anakin Skywalker and his Padawan
Ahsoka race across the galaxy to aid
Jedi Knight Aayla Secura who is in
the midst of a fight
for her life as the sinister droid army
closes in….

Anakin Skywalker and Ahsoka’s fleet go to assist the fleet of Jedi Knight Aayla Secura, which is being heavily damaged by three Munificent-class star frigates. The Separatist droid commander, a tactical droid, sees an opening as the frigates dispatch rocket droids onto her ship’s hull. Anakin and Ahsoka arrive just in time, their ship launching three gunships. The rocket droids take notice and fly off to intercept. Anakin leaps onto one of the droids to dive right into Secura’s damaged destroyer, the Liberty, as his Padawan and troops when the gunship crashes. They rendezvous with Aayla, before making their way to a cruiser in the lower docking bay.

However, the Separatist Tactical Droid orders the destruction of the remainder of Aayla’s Fleet, and the massed laser fire causes an explosion to rip right towards the escaping group of clones and Jedi. Anakin Force-Pushes the others to safety, then attempts to use The Force to telekinetically maintain the integrity of a bulkhead he closed to ward off the explosion. He fails to restrain the full concussive force of the explosion, which hurls him into the bulkhead behind him, severely injuring him. Ahsoka manages to haul him out, and they get on the cruiser. However, before they can dock at the Resolute to give Anakin medical attention, fire from droid fighters knocks out one of the pilots, accidentally activating the hyperdrive. The cruiser quickly detaches from the Resolute, then shoots off to hyperspace; Yularen orders his men to finish the battle before going after the cruiser.

In hyperspace, the cruiser is set to run into a nearby star. Risking Anakin’s life, Aayla orders all power systems, including life support, to be shut down to reset the navicomputer, which brings them out of hyperspace. However, the loss of gravity makes it difficult to restart power. Aayla uses the Force to flip the power switch, enabling them to circle the star, but their speed sends them crashing into the nearby planet of Maridun. Once they crash land, they set up a camp from some of their wrecked ship’s parts. Aayla says they must find help for Anakin; Ahsoka states that she and Rex will stay behind but Aayla states that they must work together. Bly finds a tablet with a carving of a tree, implying that there may be sentient life on the planet. Rex promises to watch after Anakin, while the others go search for help. Along the way, Aayla senses Ahsoka’s confusion over the Jedi code of no attachment and that they are supposed to be compassionate at the same time. Aayla tells her that she was close to her master but in time, she learned to let him go.

Aayla’s group finds a giant tree that was depicted in the tablet. However, giant seedpods come falling down on them from the trees but no one is hit/hurt by them. Aayla notices a trail made from dragged-away seedpods, and they follow the trail.

Back at the camp, something is watching Rex and Anakin. Hearing rustling in the bushes, Rex goes to check it out. As Anakin finally comes to, he senses something and tries to get up but collapses. He manages to tell Rex that there is something behind him. He turns around and a mastiff phalone attacks him. He manages to scare it off with his blaster.

In a clearing, two more of the beasts attack the group, killing Cameron, Lucky, and Flash before being scared off. Aayla, Ahsoka, and Bly soon find a village of Lurmen who had settled on the planet, far away from the war. The village elder, Tee Watt Kaa refuses to aid them, fearing that destruction will break the peace they already have. However, at Ahsoka’s request, he does allow his son, Wag Too, to help them bring Anakin back to the village for medical support. But he requests that only one Jedi is to go with him and that Bly should follow. Ahsoka and Bly go back with Wag Too in their company, while Aayla remains behind as insurance.

In a homestead, Aayla and the elder discuss the war. Aayla says that they did not start the war and only hope to bring peace back to the galaxy; the elder says that he doesn’t see a difference as to who started it. Only by laying down their arms on both sides can they hope to achieve peace.

At the camp, Anakin senses more creatures nearby and stands to fight. Two emerge from the bushes, ready to strike. As they charge, Rex shoots one of them, but the other rams between them. Luckily, the others arrive in time; Wag Too uses rope to bind the creature, but tells Ahsoka not to kill it, merely to topple it. They pull on the rope, bringing the creature down on its side. They then bring Anakin back to the village, where Wag Too uses healing oil on Anakin.

Outside the village, Ahsoka acknowledges to Aayla that she was right; if she had stayed with Anakin, then they would have never found the village in time to save him. However, their only concern is getting off this planet and they hope that Yularen can find them soon.