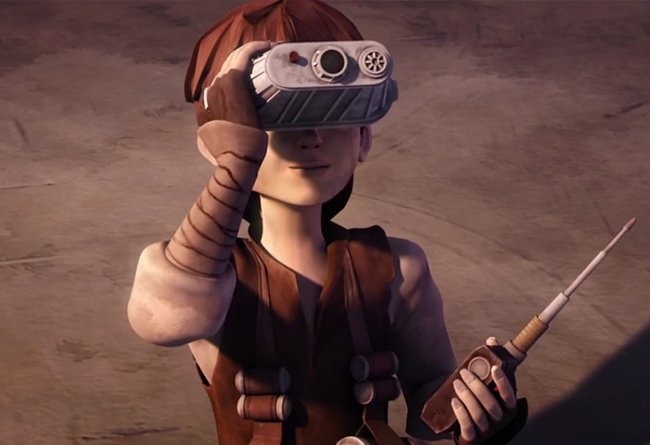 Hard-pressed Jedi and their valiant
clone troopers have thwarted an
insidious Separatist plot to plant bombs
loaded with the deadly Blue Shadow
Virus in key Republic systems.
Obi-Wan Kenobi and Anakin Skywalker
have captured the vile scientist behind
the nefarious scheme: Doctor Nuvo
Vindi. Now the Jedi plan to transport
Vindi to the Republic capital for trial….

Obi-Wan and Anakin prepare to transfer Dr. Nuvo Vindi to Theed for trial. Padmé and the clones discover that one of the virus bombs is missing the container that held the Blue Shadow Virus, meaning that if the wrong hands have possession of the virus (in this case, Vindi), it can still be released, and they sound the alarm.

Two clones search for Vindi’s servant droid in the bomb room. The droid sneaks into the room behind them and inserts the virus into a bomb. Before the clones can stop it, the droid sets off the bomb, and the virus starts to spread through the complex. Rex, Ahsoka and the clones manage to make it into the safe room. Ahsoka briefs Anakin on the virus’ release, and he informs Padmé. She sets off with Jar Jar in their EVA suits to find Ahsoka and prevent any remaining droids from escaping the lab and releasing the virus onto the planet.

Anakin tries to wrest the antidote out of Vindi, but Vindi taunts him, stating that his job was to manufacture a plague, not cure it. Obi-Wan manages to convince Anakin to lay down his lightsaber, and they depart for Theed. Ahsoka, Rex and the clones discover that a small portion of the virus managed to get into the safe room before the door closed and they were thus contaminated. Padmé and Jar Jar, summoned by Ahsoka, open the door to the safe room, and she and Ahsoka take up the task of destroying the droids before they can ascend to the surface of Naboo. During a struggle in one of the corridors, Padmé rips a hole in her Envirosuit after tackling Jar Jar to save him from blaster fire and is thus affected by the virus as well.

Anakin, Obi-Wan and Vindi arrive in the hangar bay, and they meet up with Typho. Vindi is escorted away, and Typho tells Anakin and Obi-Wan that he may have found an antidote: Reeksa root, found only on Iego, in the World of a Thousand Moons, which happens to be Separatist-controlled space. Typho mentions that it’s “suicide”, but Anakin and Obi-Wan head off in the Twilight anyway.

Anakin and Obi-Wan approach Iego, but not before passing through a massive ship graveyard in its orbit. As they land, they find strangely disfigured droids with mixed-up parts, all saying, “Welcome to Iego”. A boy approaches them and introduces himself as Jaybo before going over to lie in a hammock strung between the legs of two Vulture droids, with the retrofitted battle droids attending him. Jaybo explains that when the Separatists left, they left a lot of their droids behind, and he simply reprogrammed them to serve him. When Obi-Wan and Anakin inquire about the Reeksa root, Jaybo mentions that the system is “haunted” and no one gets off the planet, since Drol, the phantom ruler of Iego, destroys anyone attempting to leave. According to Jaybo, fifty of the best pilots in the galaxy tried, and none made it alive.

Jaybo leads them to Amit Noloff, who tells the Jedi that the ghost of Drol is preventing them from leaving the planet. When the Jedi don’t believe him, he shows them a hologram of Taquito, a friend of Jaybo’s, being electrocuted before his ship exploded. Anakin and Obi-Wan attempt to leave Iego in the Twilight, but as they pass through the debris field, sensors activate an energy field that prevents them from getting very far from Iego, and they return. Obi-Wan theorizes that the Separatists installed the energy field to prevent the inhabitants from leaving the planet.

As they land, Obi-Wan and Anakin receive a hologram from Ahsoka and Padmé, both appearing parched and weak. Ahsoka weakly tells them that they have destroyed all the droids in the compound and that Naboo is safe from further contamination. Padmé asks Anakin to promise her that no one will ever open the bunker, and starts to say “I love you”, but the hologram is cut off. As they walk out onto the platform, Anakin starts to panic, having realized that Ahsoka and Padmé are dying from the effects of the virus. He tries to rush and find a solution to getting past the energy field, but Obi-Wan has an idea and manages to calm Anakin down.

The Jedi call a meeting with the citizens of Iego. Obi-Wan tells them that Drol is not a ghost, but a Separatist security system. He asks if anyone inhabited Iego’s moon before the Separatists arrived, and an Angel enters the room. She tells the Jedi that they were a peaceful people before the Separatists arrived and stole their home: the moon of Millius Prime, and Anakin theorizes that the primary node of the energy field must be near Millius Prime. Obi-Wan notices Vulture droids in another room, and he asks Jaybo to reactivate them so that Artoo can fly them via remote control. The Vultures are activated, and after Jaybo transfers control of the droids to Artoo, they launch and follow the Twilight into the ship graveyard. The laser field activates, and Artoo attempts to send the Vulture droids into the laser emitter, but they are destroyed. Obi-Wan fires at the generator, and the energy field explodes. Anakin mentions to Jaybo that he will need new Vulture droids, as all were destroyed, but Obi-Wan tells them that they are free to leave Iego whenever they choose. The Twilight immediately jumps into hyperspace for Naboo.

LAAT/is land at the lab, and stretchers bearing Padmé, Ahsoka, Rex, and the rest of the clones are transported onto the gunships. Anakin and Obi-Wan find the others weak from their ordeal, but thanks to the antidote they are expected to make a swift recovery. Glad about the outcome, all commend each other for their achievements.