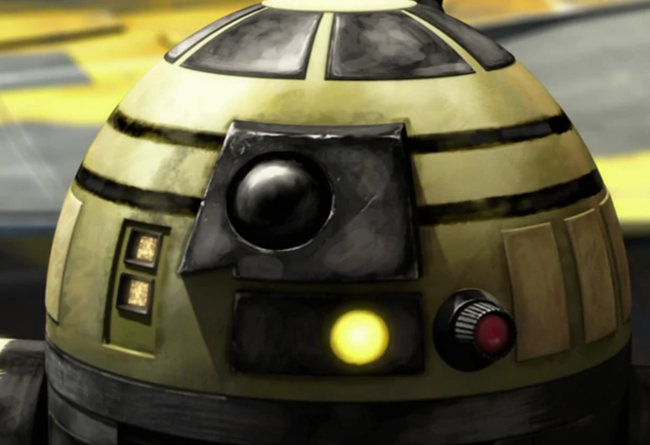 After suffering a series of
disastrous defeats at the
hands of General Grievous,
the Republic’s foothold in the
Outer Rim is in jeopardy.

Commissioned to protect the
strategic world of Bothawui,
Anakin Skywalker and his
weary battle group are all that
stands between the system
and domination by the
droid army….

Because General Grievous has been ambushing Republic fleets, Obi-Wan Kenobi advises that Anakin Skywalker take his fleet out of the Bothawui system and regroup, but Skywalker has a plan to defeat Grievous. At that moment, Grievous’ fleet is advancing on his. Anakin leads Gold Squadron in a frontal assault, informing his forces to wait for the right moment as Grievous’ fleet advances through the asteroid belt. This gives Rex and his brigade of AT-TEs hiding on the asteroids a chance to ambush the Separatist frigates from behind.

Finding his droid commander too incompetent to figure out where to retreat to, Grievous flees the ship on his personal starfighter. Anakin and R2-D2 pursue him until a piece of shrapnel embedded in the fighter causes it to careen off course. Anakin later wakes up aboard the Resolute, learning that he was salvaged from his fighter; R2 was not. However, he informs Obi-Wan that he didn’t erase Artoo’s memory, which would be a severe liability should the astromech fall into Separatist hands. Anakin heads a salvage operation to recover Artoo, but Ahsoka Tano shows him the new R3-S6, who has better skills than an R2-unit, calling him Goldie. As they search the debris field, they spot a freighter and dock with it. The Trandoshan captain, Gha Nachkt, claims there is no R2 unit on board but allows them to search anyway. Anakin hears R2’s beep and begins to slice through the door that he thinks he heard it in. But Goldie accidentally activates two IG-86 units instead of opening the door. The two Jedi manage to slice the droids in pieces as Anakin gets through the door, only to find Gha, who is angry that his droids were destroyed. Ahsoka concludes that R2 is not on board and they leave. But unfortunately, Gha had the little droid locked in a crate with a restraining bolt on and contacts Grievous, informing him that the droid is of great strategic value. R2 later escapes while Gha is sleeping, flushing one of his IG units out of the airlock, only to be discovered by the Trandoshan.

Figuring that Grievous has a listening post somewhere, Anakin decides to go scouting, but Ahsoka sends along R3, saying they could bond. R3 instead accidentally turns on the tracking device, alerting Grievous to his position. R3 only makes things go from bad to worse, detaching Anakin’s fighter from its hyperspace transport ring, not cutting the engines when he is told to, and disabling the blaster cannons. He is luckily saved by Ahsoka and Rex in the Twilight. Grievous, frustrated with Skywalker’s escape, beheads a battle droid in rage. Anakin chastises the incompetent droid over nearly getting him killed and hopes that R2 is still out there.