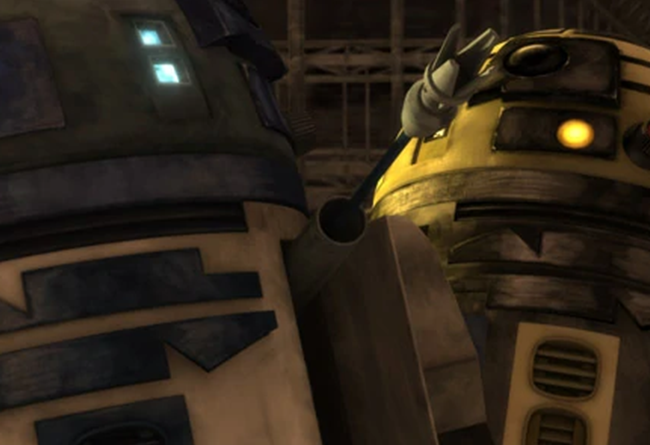 Missing in action! Anakin
Skywalker’s heroic droid
navigator R2-D2 was lost in
battle. When a desperate
search fails to locate Artoo,
Anakin is forced to take on
a new navigator, R3-S6.

Now the Jedi embark on a
dangerous new mission, to
find a secret enemy listening
post. Meanwhile, R2-D2 has
fallen into the hands of a
vile droid smuggler and is
on his way to General Grievous
who will surely plunder the
Republic’s secrets hidden
within him….

R2-D2 manages to transmit the location of Grievous’ listening post on a Ruusan moon, which the Twilight picks up. Though advised by Obi-Wan Kenobi to wait for reinforcements, Anakin Skywalker heads a rescue mission to save Artoo before his secrets fall into Separatist hands, as well as plant a bomb. Gha Nachkt accesses Artoo’s memory bank and finds that the little droid contains every Republic strategy. He demands more money but Grievous decides to give it to him by stabbing him in his back with his lightsaber. When the team arrives at the station, Anakin separates from Ahsoka Tano and the clones, heading out alone to find Artoo. Unbeknownst to them, R3-S6 is actually a spy for the Separatists, and alerts General Grievous to their presence. Tano and the clones infiltrated the reactor control room, but they had to confront and eliminate the security battle droids. After that, Grievous orders his IG-100 MagnaGuards to take Artoo to the ship.

Meanwhile, Anakin has succeeded in finding R2-D2, and duels Grievous’ MagnaGuards. Once they are defeated, he and Artoo order everyone to rendezvous in the south hangar. Unfortunately, Ahsoka does not hear them, as Grievous has engaged her and her clones. The general kills all clones but Rex and Denal. Ahsoka defends herself against Grievous’ blows and retreats to a room filled with spare droid parts. She hides from the general, but R3 gives her away. Grievous destroys her comlink, and traps her. As Anakin and the clones, who have succeeded in planting the bombs, meet the Twilight in the hangar, R3’s treachery is revealed when he traps them and activates several droids to fight them, as Anakin’s suspicion on the golden droid’s true allegiance is true. Anakin orders Artoo to open the doors. Grievous, meanwhile, suspends himself from the roof in the storage room and is able to find Ahsoka, using one of his large, metal hands to grab the Padawan’s throat and disarm her. The general descends to the floor, picks up her lightsaber and examines it. Ahsoka coughs and gags trying to free herself, but she can’t release herself from the grip on her throat. Grievous is confident that R3 had trapped the others, stating that after he eliminated Ahsoka, her master was next. Ahsoka, not afraid of dying believes Anakin would still succeed in destroying the base. At that moment, Skywalker orders Rex to activate the explosives, despite the fact that the squad is still in the station.

Rex complies, and as the station shakes with the multiple impacts, Ahsoka is able to use her lightsaber to sever Grievous’ hand that is clamped around her throat. The Padawan jumps onto a shelf, causing the shelves’ contents to drop out, and the shelves themselves began to topple over in a domino effect. Ahsoka escapes into an air vent and retrieves her lightsaber with the Force before fleeing. Grievous slashes at the vent Ahsoka was in with his lightsaber; however, the Padawan is able to evade being sliced to pieces, and she heads for the hangar bay. Ahsoka rejoins the team, who defeats the Vulture droids and escapes in the Twilight, detonating the bombs. Grievous escapes the station in his ship, Soulless One. Anakin leaves in his starfighter to pick up Artoo.

Meanwhile, Artoo manages to open the hangar doors, but R3 moves to intercept him, and the two droids face each other in combat. Artoo pushes his Separatist counterpart over the edge, but R3 grabs him with a suction cup. Artoo succeeds in cutting the cable, and R3-S6 is sent flying into the air, and he is destroyed by flying debris. Artoo is then rescued by Anakin.

As they leave the system, Anakin contacts Obi-Wan. While they succeeded, Obi-Wan disapproves of Anakin’s choice to risk the mission and all their lives to save a droid. While Ahsoka is happy they got R2 back, she agrees with Obi-Wan. However, Anakin says R2 is more than a droid: he is a friend.