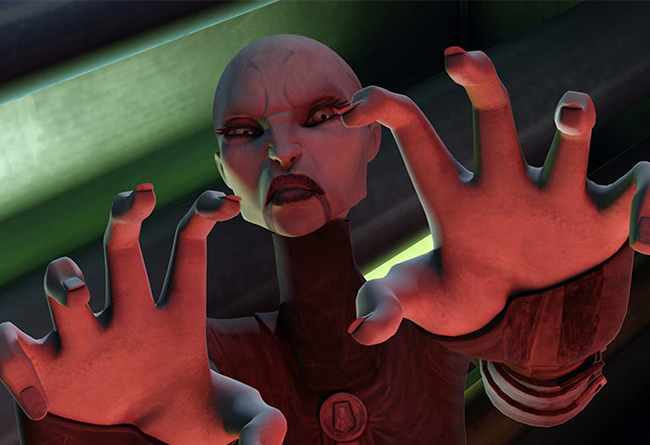 Background: Asajj Ventress was a Dathomirian female who, at various points throughout her life, was a slave, a Jedi Padawan, an assassin of the Sith, a Nightsister and a bounty hunter. In the final decades of the Galactic Republic’s reign, Ventress was born into a clan of Force-sensitive Nightsister witches led by Mother Talzin on the planet Dathomir. Early in her life, her coven was forced to surrender Ventress to the criminal Hal’Sted, who spirited Ventress away from her sisters to the war-torn world of Rattatak where she was raised as a slave in his service. She was orphaned when her master was killed by Weequay pirates, but was later discovered by the Jedi Knight Ky Narec, who was stranded on Rattatak and waging a battle against the pirate marauders. Narec raised Ventress and taught her to use the Force in the ways of the Jedi Order, and together they protected the people of Rattatak and fought back against the predatory attacks of pirates and warlords. After a decade of helping the local population, Ventress was orphaned once more when Narec was killed by pirates seeking to end the Jedi’s crusade on their world. Enraged by the loss and bereft of guidance, Ventress embraced the dark side of the Force, deposing the local warlords and ruling in their stead. She was eventually discovered by the Sith Lord Count Dooku and fell under his guidance and tutelage as a dark acolyte and aspiring apprentice.

When the pan-galactic Clone Wars erupted between the Galactic Republic and Dooku’s Confederacy of Independent Systems, Ventress became a commander in her Master’s Separatist droid military and an assassin in the employ of the Sith. Her exploits brought her into conflict with the Jedi Order and she became renowned for her skill and cruelty as she waged war against the Republic. She frequently crossed lightsabers with Jedi Master Obi-Wan Kenobi and Jedi Knight Anakin Skywalker, heroes of the Republic who were often assigned to counter Ventress’s efforts. Although she was highly talented and saw success in the kidnapping of Rotta the Hutt, the rescue of Nute Gunray, and the infiltration of the Republic fortress world of Kamino, Ventress was repeatedly forced to compete for her Master’s favor against Confederate military leader General Grievous.

As the war progressed, Dooku’s own master, Darth Sidious, became increasingly wary of Ventress’s growing strength in the Force and ultimately ordered the Confederate leader to eliminate his apprentice in a show of loyalty. Dooku complied, and during the Battle of Sullust, betrayed Ventress and ordered her own forces to execute her. Left for dead, Ventress survived and clawed her way back to her homeworld of Dathomir to seek refuge and revenge. Mother Talzin and her coven welcomed Ventress back to their sisterhood and together they conspired to kill Dooku. After a failed attempt to assassinate the count, Ventress and Talzin moved to install a pawn of their own close to Dooku as his new assassin and apprentice. To that end, Ventress selected the Zabrak Nightbrother Savage Opress to be gifted to Dooku and eventually to aid her in his murder. This plan also went awry after Opress rejected both Ventress and Dooku and nearly killed them both. Resolving to make a new life for herself, Ventress returned to Dathomir to formally rejoin her clan and forgo further plans for revenge, but Dooku would not have it. The count targeted the Nightsisters for harboring his former apprentice and dispatched Grievous and his droid army to massacre the Dathomirian witches. Mother Talzin and Ventress were among the few survivors of the slaughter and were forced to separately flee Dathomir to escape Dooku’s wrath.

Ventress was deeply hurt by the loss of her newfound family and so took to wandering the galaxy in search of a purpose, ultimately turning to bounty hunting, and finding a good measure of success in the business. This work forced her to adopt a series of unexpected alliances—she rescued Obi-Wan Kenobi from the clutches of the former Sith Lord Maul and Savage Opress, who had recently apprenticed himself to his renegade Sith brother—and worked alongside Skywalker’s apprentice, Ahsoka Tano, when Tano was falsely accused of bombing the Jedi Temple. Near the end of the Clone Wars, she encountered Quinlan Vos, a Jedi Master tasked with assassinating Count Dooku to end the war. Vos partnered with Ventress under the guise of a fellow bounty hunter but ultimately revealed his identity and purpose after the two fell in love. Ventress trained Vos in Nightsister culture and dark-side skills to prepare for a strike against Dooku, but their attempt to kill the count failed, and she was forced to flee while he was taken into Confederate custody. She eventually worked with Kenobi and Skywalker to rescue Vos, but months of torture at Dooku’s hand had turned him to the dark side. Although Ventress sensed his fall, Vos refused to believe his own darkness and was again sent to kill Dooku by the Jedi Council. She joined him on this final mission, but it was met with failure when Vos gave himself fully to the dark side. Ventress reluctantly helped Vos and Dooku in fleeing from Jedi pursuit but refused to embrace the dark side once more. Instead, she sacrificed herself when Dooku attempted to kill Vos with Force lightning by absorbing the blast to protect her lover. Her death finally motivated Vos to renounce the dark side, and she was honored for her sacrifice by the Jedi Council. Ventress’ body was later laid to rest in the waters of her clan’s village on Dathomir.