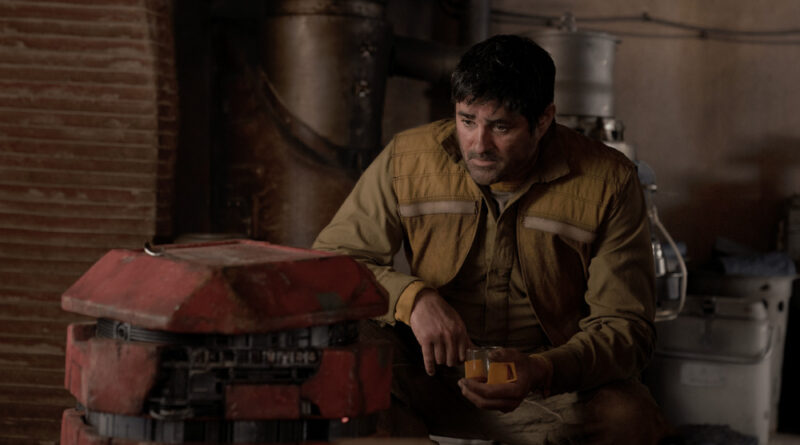 On Narkina 5, Cassian Jeron Andor and fellow prisoner Ruescott Melshi climb a high cliff while hiding from a patrol craft. Elsewhere on Ferrix, Andor’s adoptive mother Maarva Andor has passed away. Brasso speaks with a despondent B2EMO, who is grieving his master’s death. The droid watches as Brasso, Jezzi, and others carry her wrapped remains outside. Cinta Kaz and a disguised Imperial spy also watches the procession from a distance.

From their cliff, Andor and Melshi watch a quadjumper parked nearby. The fugitives also spot the Narkinian owners. They attempt to steal the ship but are caught in a net trap. Meanwhile, Captain Vanis Tigo informs Supervisor Dedra Meero about Maarva’s death and local plans to hold a funeral procession since she was a prominent local personality. Meero convinces the local Imperial officers to give the locals a funeral permit. Another Imperial Security Bureau (ISB) officer explains the Ferrix custom of cremating the deceased’s ashes and storing it as a brick.

Meanwhile on Coruscant, Vel Sartha visits Luthen Rael’s Galactic Antiquities and Objects of Interest. Kleya Marki is unhappy that Vel has broken protocol and refuses to divulge Rael’s whereabouts. Vel replies that she will be leaving Coruscant tomorrow. Vel tells Kleya that she has come to bring news about Maarva’s death and funeral preparations. Kleya agrees to let Luthen know.

On Ferrix, Cinta and ISB spy Corv observe Andor walking with B2EMO. Corv tells his contacts over the comlink that he wants information on the big target’s whereabouts. Back at the Andor family home, Andor and B2EMO discuss attending Maarva’s funeral service. Andor insists that the droid come along since he is part of the family.

Meanwhile, Bix Caleen reflects on her interrogation and torture at the hands of Dr Gorst. Keysax escorts her out of her cell into an interrogation chamber with Attendant Heert. Heert asks her if Anto Kreegyr was the man who introduced her to Cassian Andor. He warns that if she doesn’t cooperate he will bring Dr Gorst again. Bix remains silent but struggles to hide her emotions.

At the Chandrilan Embassy on Coruscant, Mothma and Vel watch Leida Mothma participating in a courtship ritual which involves chanting a vow. There are several Chandrilan girls dressed in blue and an elder. Mothma tells Vel that Leida is supportive of the custom, which Vel considers archaic and is doing it with the approval of her husband Perrin Fertha. Mothma explains that Leida was the one who found the elder.

Later that night, Mothma tells Vel about her plans to channel funds to Luthen by setting up multiple accounts. Mothma explains that a Chandrilan banker Tay Kolma warned her a few months earlier that the Empire would be scrutinising Chandrilan accounts. She transferred the money into the main account. However, there was one empty ledger at the end of the line that was off balance. She says that it was so obscure that she didn’t know what to do so she sought help from Luthen Rael.

Vel asks Mothma if she trusts Tay Kolma. Following the Mission on Aldhani, Mothma explains that all the funds were frozen. She thought Tay could help her fill the missing funds but that he discovered she was in much more trouble. When questioned by Vel, Mothma admits that 400,000 credits is missing. Mothma fears that the Imperial authorities will be investigating soon and admits that Luthen is unaware of the full situation. Vel and Mothma agree that the financial hole cannot be exposed. Mothma tells Vel that she has found a situation. They are joined by Leida, who has finished the courtship ritual. Leida is surprised and delighted to see her aunt here and the two embrace.

Elsewhere on a Coruscant, Syril Karn chats with his former Preox-Morlana colleague Sergeant Linus Mosk via video conference. Karn’s mother Eedy Karn is watching in the background. Mosk is on duty on Morlana One and brings news that Andor’s mother Maarva has passed away. He thinks Andor might show up at the funeral. Karn wants more information but the transmission terminates. Eedy makes a snide remark about her son’s former triumph being vanquished.

Meanwhile on a resort world, Andor retrieves a case containing a blaster and Nemik’s manifesto from a hotel room while an alien sleeps. Elsewhere on Segra Milo, Luthen Rael approaches Saw Gerrera’s Segra Milo Partisan base. Two Tubes orders the sentries to search him. Rael insists on bringing his blaster. He finds Gerrera telling Anto Kreegyr’s group that he will be supporting the raid on Spellhaus on his own terms. Rael warns Gerrera that the ISB knows Kreegyr’s plan and not to join in the raid.

When Gerrera asks Rael about his source, he refuses to divulge. Gerrera realizes that Kreegyr is unaware of the trap and asks Rael how he knows he won’t tell him. Gerrera is shocked that Rael is willing to sacrifice Kreegyr. He asks if Rael is working for the ISB or if he is protecting someone on the inside. Rael is evasive and says he is a good listener. Rael admits he is willing to sacrifice Kreegyr, which prompts Gerrera to ask if he can trust him. Rael says his contact with Kreegyr is minimal and limited to passing supplies.

Rael tells Gerrera that he can make the decision to warn Kreegyr. He warns that warning Kreegyr will mean throwing away a source they have spent years cultivating. Saw says Kreegyr has people everywhere and asks if he spies within the ISB of his Partisans. Rael tells Gerrera to consider his choices but Gerrera demands to know who the spy is. Rael claims that the spy is Tubes, who protests his innocence. Tubes charges at Rael and Gerrera but Rael grabs his blaster and points it at Gerrera.

Tunes backs away and Gerrera demands to know what game Rael is playing. Rael tells Gerrera to sacrifice Kreegyr in order to mislead the ISB into thinking that they are invincible. This will give the rebels a clear playing field. Warning Kreegyr will lead the ISB to be more vigilant about spies within their ranks. Rael says that if he were working for the ISB he would have allowed Gerrera to walk into a trap. Gerrera reluctantly agrees to sacrifice Kreegyr for the war.

On Coruscant, Karn unlocks the safe and retrieves something. Later, Rael updates Kleya about his successful sale with Gerrera. Kleya advises him to come home and tells him that they are involved in intricate negotiations about the sale of a valuable object. She believes his presence will aid their negotiations. Rael says that they need their piece and without it they would have to close the shop. Kleya replies that it is a crowded market, promoting Rael to warn her about the consequences of losing that piece to another collector. Kleya replies she is preparing for every outcome.

However, Rael terminates the transmission due to an approaching Arquitens-class command cruiser from the Segra Milo Imperial patrol. They asks Rael’s Fondor Haulcraft for identification. The ship’s droid transmits an Alderaanian transponder ID and senses an Arrestor-class cruiser nearby. The Imperial captain Elk orders his ship’s tractor beam projector to haul Rael’s haulcraft. He also orders his crew to prepare a boarding party. Rael gets the Fondor droid to prepare the ship’s engines for escape.

After he breaks away, Rael gets the Fondor Droid to fire the ship’s countermeasures, which consists of projectiles that damage the main disc of the Imperial cruiser. The captain is shocked while a naval crew reports that the tractor beam is failing. The captain dispatches a flight of TIE fighters after Rael’s haulcraft. Rael destroys two fighters with laser cannons before destroying the two remaining ones with a laser ray. The Fondor droid completes the hyperspace calculation and jumps into hyperspace, leaving the Imperials behind.

On Ferrix, Andor contacts Xanwan and tells him to tell Maarva that she is okay. Xanwan tells Andor that his mother is dead. Andor is devastated by the news and stands in silence at the transmitter on the resort world. He speaks with Melshi but claims everything is okay. Melshi asks how many of them made it out alive and is determined to tell their story. He proposes that they split up in order to improve their chances of survival. Andor passes Melshi a blaster before shaking hands and patting him on the shoulder. Andor watches the ocean waves and the setting sun in sadness. 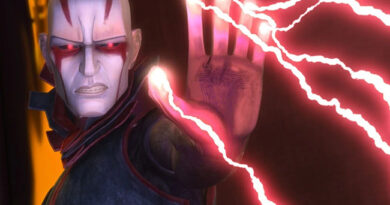 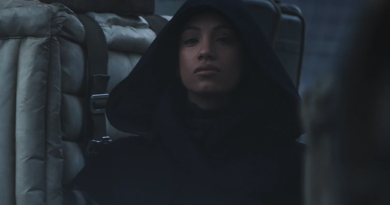 The Mandalorian Chapter 11: The Heiress 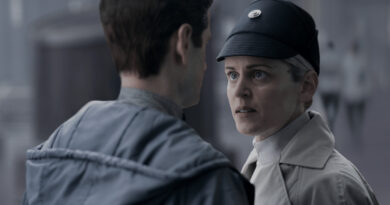