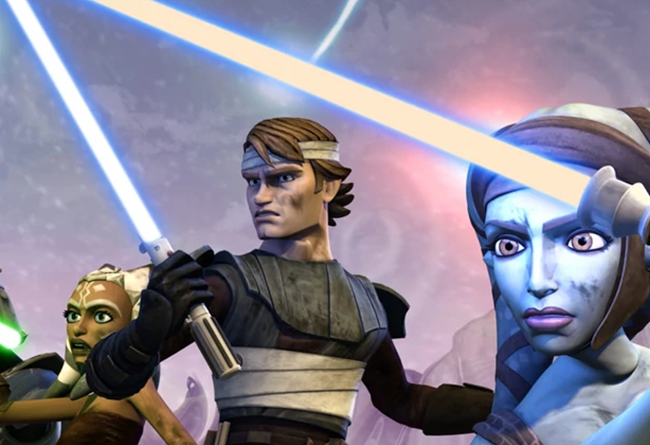 Republic forces in retreat! While rescuing
General Aayla Secura from certain defeat,
Anakin Skywalker has been seriously
injured. After a narrow escape, our heroes
crash-landed on the remote world of
Maridun. Stranded, and with no way to
contact the Republic, the Jedi receive
medical aid from the peaceful Lurmen
colonists.

But even on this tiny planet, the
war threatens to follow the Jedi….

As Anakin recovers from his injuries obtained during the Battle of Quell, Rex spots a Separatist dropship which descends near the Lurmen village. Tee Watt Kaa goes to meet the newcomers, while the Jedi escape, to avoid the Lurmen having to pay the price for their presence. The Separatist commander, Lok Durd imposes his “protection” upon the Lurmens and orders the village to be ransacked to secure his “new colony”. The Jedi, Rex and Bly retreat into the tall grass; Wag Too sends his friend Tub after them to watch their departure from the planet.

In the tall grass, the Jedi and clones recover and discuss the Lurmen’s beliefs. Unfortunately, they are overheard by a scout droid which rushes off to inform the base, but after a long chase Aayla intercepts it and slices it in half. Wondering where it was going, they climb a giant tree and notice a recently built, heavily guarded Separatist communication base. Anakin notices a shuttle, but the base is too well guarded. Also, they see the Separatists deploying some form of artillery, which Rex and Bly decide to scout up.

Lok announces to his droids that he had developed a defoliator, capable of destroying organic life while leaving non-organics unharmed. The weapon is test-fired, leaving the droids assigned to the test intact, but destroying the local vegetation in a wide area and almost Rex and Bly as well. Lok declares the test a success, but Count Dooku, speaking with Lok via hologram, suggests that it would be best to test the defoliator on living targets, like the Lurmen.

Anakin predicts that the Separatists are headed for the Lurmen, so he tells everyone that they will take out the communications station, steal the shuttle and then return to help the Lurmen. Ahsoka points out that Tee Watt Kaa didn’t want their help; Anakin justifies that there is a difference between pulling innocents into a war and leaving them to extinction. At an adjourning tree, Tub tells a carrier butterfly to inform Wag Too about the Separatists. As night falls, the Jedi and clones infiltrate the base and take out any battle droids in their way, with Rex, Bly, and Anakin taking out three droids in a Separatist command center, while one of the droids was asking for a report from 4724. The group eventually take the shuttle and two shield generators with them, and return to the Lurmen village, informing them about the impending attack. However, Tee Watt Kaa refuses to fight, holding onto their people’s beliefs even if it means their death, despite Wag Too’s pleas that they must at least defend themselves.

The Jedi and clones use giant pods to build a barricade around the village and set up the shield generators, despite Tee Watt Kaa’s stubborn protests. A defoliator round is fired at the village, but the shield protects the village, which forces Lok to send his battle droids forward. The Jedi and clones then go outside to meet their foes. They manage to fend off the first wave, but the second and third waves of droids get behind the shield and destroy the generators. Defying his father, Wag Too and his friends engage the droids, toppling them down to be decapitated. Meanwhile, Anakin destroys the defoliator cannon and slices his way to Lok, capturing him through levitation.

As Anakin and his companions prepare to leave, Wag Too and Tee Watt Kaa offer their thanks. However, the elder says, “I still wonder, at what cost?” as the Resolute and two other Republic cruisers appear in the sky.