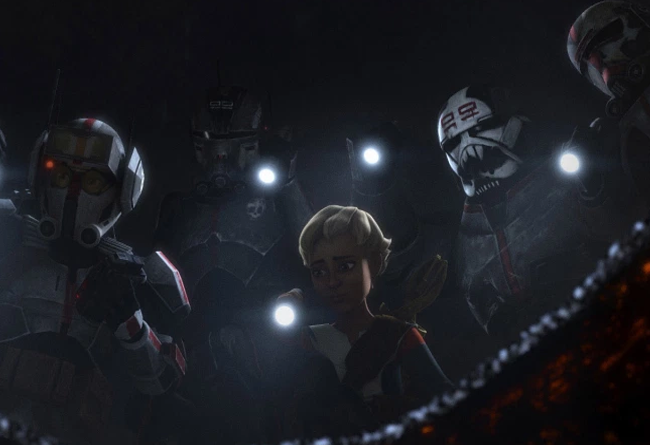 On Kamino, Vice Admiral Rampart oversees the bombardment of Tipoca City from three Venator-class Star Destroyers. The Bad Batch, Omega, AZI-3 and an unconscious Crosshair flee into the depths of Tipoca City. They are knocked to the ground by an orbital blast. As Tipoca City sinks, Omega is separated from the others by a malfunctioning blast door.

In orbit, Rampart receives a status report from a Clone trooper who tells him that the cities have been destroyed and that all Kaminoan facilities have collapsed into the sea. Rampart is pleased and issues orders for the Venator Star Destroyers to rendezvous with the rest of the Imperial Navy.

Later, AZI-3 reactivates and tends to Omega, urging her to vacate the compartment in order to save their lives. Omega soon finds the unconscious Crosshair trapped in the compartment but is unable to free him from the wreckage and debris on him. She contacts Hunter, Wrecker, Echo and Tech over the comlink, warning them that the room is flooding and that Crosshair is trapped. Tech reports that all compromised compartments are sealed to contain the flooding and that he is unable to override the protocols. Wrecker tries to pry open the blast doors by sticking his knife in between the gap while Tipoca City sinks into the ocean. Crosshair soon wakes up from the stun and is greeted by AZI-3. Omega struggles to free Crosshair.

The Bad Batch open the door long enough for Omega, Crosshair, and AZI-3 to slip in before closing the door again. Crosshair asks Hunter what the group has done. Hunter explains that the Galactic Empire opened fire on Tipoca City and that they were not going to leave him behind. Tech warns that they have to get topside before the entire structure submerges. Hunter tells Crosshair that he can choose to stay here and die, and leads the rest of his squad away. Crosshair decides to follow his former comrades.

The clones and AZI-3 flee through a transparent tunnel, now underwater. Omega stops by a window and sadly watches as Clone incubation tanks are destroyed. Wrecker tells her they have to go. As they flee, the tunnel begins cracking under the weight of the ocean. When the falling facility that they are in comes to a stop, Tech believes that they have landed on the ocean floor. While discussing a damage assessment, water bursts through cracks in the tunnel. The clones flees to higher ground, with Crosshair being lost in thought momentarily before deciding to follow them.

The Bad Batch end up in their former barracks, which Tech describes as, ironically, one of the few habitable compartments. Echo remarks that the smell is gone, and Wrecker finds that their score chart is still there. Crosshair is bitter that his comrades threw away their legacy. Hunter replies that they made a choice and so did he. Crosshair responds that soldiers follow orders. Hunter counters that blind allegiance makes him a pawn and that a real leader protects his squad. Crosshair tells Hunter that they are going to die due to his “failed” leadership.

Omega disagrees, telling them that they have landed near the Kamino tube system. She proposes using the tube system to reach the base post so that they can get back to the Havoc Marauder. Tech thinks that accessing the tube will be challenging, to which Echo replies this is better than staying here. Crosshair remarks that Omega is calling the shots. Hunter asks if he has better ideas before shouldering him.

AZ1-3 uses a precision weld to cut open the maintenance hatch, which leads to a tunnel in the tube system. The clones slowly enter the tunnel. As the transparisteel canopy above them starts to crack, Crosshair opines that they should go back and find another way. AZI-3 responds that this is the best option while Wrecker blames him for the mess they are in. When Crosshair mocks his intelligence, Wrecker reminds him that he did not return but admits that they would have still come back for him.

Tech tells Wrecker to let go of the past, adding that Crosshair is severe and unyielding, a nature that not even he himself can change. When Crosshair asks Tech why he is defending him, Tech clarifies that he is not, stating that understanding him does not mean agreeing with him. Omega thinks that the tube system is unsafe but AZI-3 reassures her that this is their only viable transport. Hunter agrees with AZI-3 and leads the way. While going though the tunnel, the clones hear a beast roar from the depths of the ocean. Omega asks if the tunnels are protected, to which AZI-3 responds that they are only protected with power, which is currently off.

A large sea creature with sharp teeth hurtles at the tube system and bites into it, causing the transparisteel frames to crack. AZI-3 theorizes that restoring power should drive the creature away, and runs ahead to activate the power while the clones flee through the tunnel. The power surge electrocutes the sea monster enough to drive it away but causes the power system to short circuit. The clones arrives near the power generator in time. AZI-3 apologizes that his actions have caused the structure’s remaining power to short out, but thinks of the outcome as satisfactory as they survived the transit.

Nursery of the Bad Batch

The clones and AZI-3 climb through a hatch which leads to Nala Se’s private lab. Hunter, having never been to the lab, asks where they are, and Tech explains that this is where their mutations were manipulated and enhanced. When Crosshair asks how Omega would know, Tech explains that she was there. He adds that Omega was created before them, making her technically older than them. They then dicover that the tube leading towards the landing pad has been completely destroyed, trapping them in the lab.

Later, while the clones rest inside Nala Se’s lab, AZI-3’s power cells begin depleting. Echo reports that long-range comms are down and that their oxygen levels will be critical in a few hours. Crosshair blames his former comrades for letting the “kid” call the shots. Hunter responds that the “kid” saved Crosshair’s life unlike the Empire who left him for dead. Crosshair accuses Hunter of taking things personally. When Hunter points out that the Empire destroyed an entire city, Crosshair replies that they did what needed to be done.

Crosshair says that Kamino, the regular clones, and the Galactic Republic’s time is over. He says that the Empire will control the entire galaxy and hopes to be a part of it. He tells Hunter that he made the wrong choice before turning his back. Hunter warns Crosshair that the Empire only regards him as a number rather than a being. Crosshair sits down at the side of the room, deep in thought.

Omega comes to sit with him. She observes that he never liked Kamino. Crosshair tells her to go away. Omega says that she understands, having spent most of her life inside this laboratory. She says that she was alone down here until the Bad Batch were created. Omega explains that is why she was determined to find them all again. Crosshair replies that being a clone doesn’t make her one of them. Omega says that she wanted to believe it was the Inhibitor chip that made Crosshair like this, but was wrong. She then gets up and walks away.

Meanwhile, Echo proposes using medical capsules to escape the wrecked tunnels. Tech says that if their mass is evenly distributed, the buoyancy of these watertight chambers will bring them to the surface. AZI-3 says that medical capsules have not been tested for capabilities. Hunter adds that they won’t have directional control and asks how they will avoid the debris field out there.

Crosshair proposes that the droid can guide them through the debris field. Hunter asks if AZI can guide them to the surface. AZI-3 says that barring any extraneous circumstances, he should be able to complete the task. When Omega asks if that will be dangerous, the droid replies that their safety and wellbeing is his primary objective.

Getting to work, the Omega plants detonators on the windows while the clones prepare the medical capsules. Wrecker complains about not fitting inside his capsule but Hunter says that at least they are not double bunked. AZI-3 is drawing upon his reserve power and tells Omega they must hurry. With the explosives set, the clones seal up their tanks. Hunter and Crosshair travel in the same tank while the others have their own tanks. Omega ignites the explosives, and the tanks are swept out by a wave of water.

AZI-3 guides the clones’ medical capsules through the ocean, dodging debris. While AZI-3 is trying to guide Omega’s capsule, the droid is hit in the head by debris, causing him to lose control of Omega’s capsule. Omega’s capsule descends to the ocean. The other clones reach the surface and open their capsules, and AZI-3 manages to retrieve Omega’s capsule. As they ascend to the surface, AZI-3 exhausts the last of his reserve power. He tells her that her path is clear and that he has completed his objective before shutting down. Omega is distraught by the loss of her friend.

Exiting her capsule, Omega swims after AZI-3 despite the objections of Hunter. She soon finds AZI-3 and grabs him. Hunter decides to go in, but Crosshair aims his rifle at the water and shoots a grapple that latches onto AZI-3, pulling him and Omega to the surface. As Hunter tends to Omega, Wrecker eyes Crosshair with suspicion and aims his own blaster at Crosshair, who tosses the rifle to Wrecker. Tech says that they have a visual on the Marauder and tells them to start paddling on their makeshift rafts.

The clones travel through the burning sea. At daybreak, they reach the landing platform where the Havoc Marauder is waiting. Omega and the Bad Batch watches the burning wreckage of Tipoca City one last time. Tech says that they should leave before the Empire’s scouts show up. Wrecker asks Crosshair if he is coming with them. Crosshair says that none of this changes anything. Hunter tells Crosshair that he offered them a chance and that this is his chance.

Crosshair replies that he made his decision. Hunter says that they want different things but this doesn’t have to make them enemies. Crosshair stares into the horizon. Omega is despondent and Hunter pats her on the shoulder. The other clones climb aboard the Havoc Marauder while Omega stands with Crosshair before running to join the others. Before leaving, she thanks Crosshair for saving AZI-3. Crosshair tells her to consider them even. Before leaving Omega tells Crosshair that he is still their brother and that he is her brother too. Crosshair stands on the platform with a glint of sadness in his eyes.

Later, several V-wing starfighters escort a Rho-class transport shuttle on a forested, mountainous world. They land at an Imperial base built into a mountain. Clone troopers escort Nala Se off the shuttle. She is greeted by a medical officer who tells her that they admire her scientific talents. She tells Nala Se that the Empire has big things planned for her. The troopers and scientist escort Nala Se inside the base.