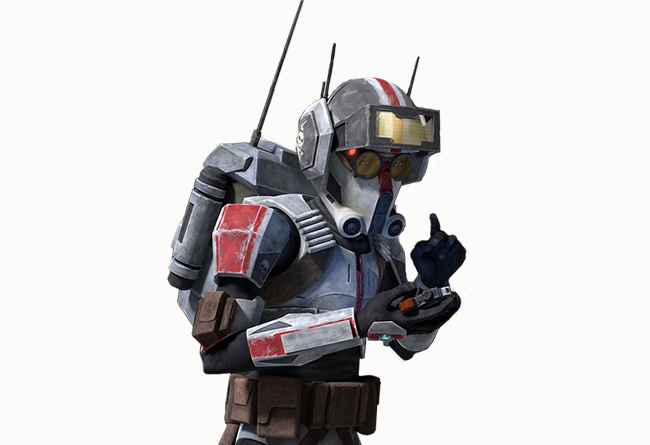 Special Abilities:
Military Training: All Clones go through intensive military training throughout their formative years.
Questionable Obedience: Clone Force 99 operate outside the normal chains of command and will question the orders of their superiors.
Superior Intellect: Tech has a genetic mutation that granted him high intelligence and mastery of technology. Tech gets a 1D bonus when analyzing mission plans or when modifying technology.

Background: “Tech” was the nickname of a clone commando who served in the Grand Army of the Republic during the Clone Wars as a member of Clone Force 99. Due to his genetic mutations, he appeared leaner, fairer, and younger than his fellow clone troopers.

Tech served as the brains of his squad and was a valued asset in this regard, using his high intellect and mastery of technology to ensure their operations were successful. Even so, he was no less skilled in combat than the other three members.

Tech was part of Clone Force 99, an elite squad of clone commandos with genetically engineered enhanced abilities. Tech had an aptitude for science and had incredible skills with technology, including engineering, decryption, and language translation. His appearance differed from that of normal clones of Jango Fett in that he appeared younger, leaner, and lighter-skinned than his genetic template.

Tech and the rest of Clone Force 99 were on Kaller when Order 66 was issued. However, his inhibitor chip failed to activate properly, and Tech did not participate in the Great Jedi Purge. Shortly after Order 66, Tech and his fellow clones returned to Kamino, where they learned with the rest of the galaxy that the Galactic Republic was being reformed into the Galactic Empire. After meeting a female enhanced clone named Omega, Tech and the rest of Clone Force 99, with the exception of CT-9904 “Crosshair,” fled Kamino against orders, becoming fugitives from the Empire.

Tech made use of a heavily modified suit of Katarn-class Commando Armor with a specialized visor that acted as a computer display. A computer terminal was installed into the forearm portion of his armor, enabling him to access a number of versatile functions, such as trajectory calculation, translation of alien languages, and recording and replaying sound effects. Tech’s advanced data analysis skills allowed him to solve technical issues at speeds even faster than some droids.

Personality-wise, Tech was very talkative and communicative; one of his major quirks was his eagerness to dispense trivial knowledge about any given subject without hesitation or reason. When confronted with a task which demanded his full concentration, he tended to become oblivious to what was going on in his surroundings, unless it was a matter of life and death. Tech could often miss the intention behind a question someone asked him, such as when Omega asked him what the Clone Wars were like.

He also made an effort of recording all sentient sounds he encountered, that at one occasion helped the squad, alongside Jedi Knight Anakin Skywalker, CT-7567 “Rex,” and CT-1409 “Echo” escape from an enemy base. Tech was also very non-confrontational and rarely grew angry. When his squad-mates would argue with each other, he would frequently walk away and not participate. Much like Hunter and unlike his other two teammates, Tech was mostly civil and respectful to his fellow clones.

Tech’s primary weapons were two DC-17 hand blasters, with which he was very proficient, and during a mission in Corellia he carried a DC-15A blaster carbine. He wore modified Clone Pilot Armor with a unique helmet. The helmet was equipped with a translation visor that was capable of translating various languages. 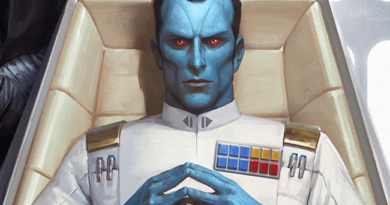 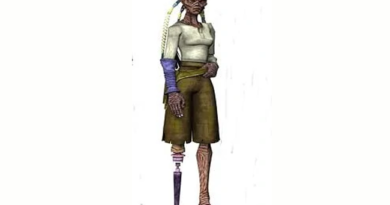 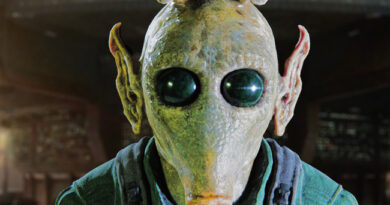