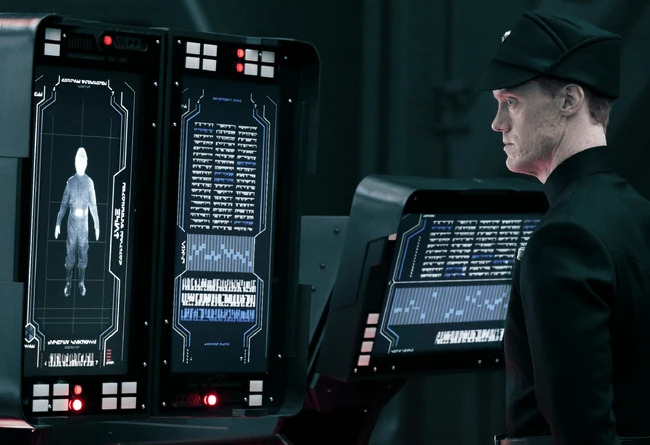 Obi-Wan Kenobi wakes up to find himself in a starship flown by Tala. Tala and her droid NED-B tend to Kenobi. Through flashbacks, Kenobi remembers being carried by Tala and her operatives to safety. While submerged inside a bacta tank, Kenobi is haunted by memories of his earlier duel with Darth Vader. Panicking, Kenobi climbs out of the bacta tank. Tala reveals that they are on the planet Jabiim. Kenobi asks about Leia’s whereabouts.

At Fortress Inquisitorius on the ocean moon of Nur, a defiant Leia tells her stormtrooper captors that she is the daughter of a senator and a Princess of Alderaan. The Third Sister Reva enters the interrogation room, stating that the Empire doesn’t tolerate Jedi sympathizers. She also claims that Kenobi is dead and that nobody is coming for her.

On Jabiim, Tala and Kenobi approach Roken, who wants Kenobi to leave on the first transport on the grounds that he is putting them in danger. Kenobi seeks Roken’s assistance in rescuing Leia but Roken is unwilling to help. Tala stresses Leia’s importance to their work but Roken doesn’t want to risk exposing their operations. Kenobi pleads with Roken but he warns that he has no idea what the Empire is capable of. Roken talks about the pain of losing his Force-sensitive spouse to the Inquisitors.

Roken ultimately agrees to help Kenobi. Later, he briefs Kenobi and Tala about the water moon of Nur in the Mustafar system. Roken’s intelligence suggests that Lord Vader is still on his ship but he believes that the Sith Lord is close. Roken’s rebel comrades Wade Resselian and Sully discuss infiltrating Fortress Inquisitorius with Roken, who describes it as the Inquisitors’ command center and training facility. Sully admits that they do not know what lies inside the fortress. Roken reveals that the facility is unshielded since the Inquisitors believed that nobody is stupid enough to attack.

Kenobi proposes using T-47 airspeeders to land at the facility. Sully dismisses the idea since the airspeeders are used for hauling sewage. Kenobi is unwilling to abandon a child and volunteers to go alone. Sully points out that Kenobi is still wounded. Tala volunteers to accompany Kenobi for the rescue mission, using her officer clearance to get him inside Fortress Inquisitorius. Kenobi asks if her cover is still intact, prompting Tala to reply that they will find out soon.

Kenobi and Tala travel on Tala’s ship to Nur. During the journey, Kenobi reassures Tala that he will be alright while practising with levitation. Tala says that some things take time to heal. Kenobi responds that some things cannot be forgotten. Tala replies that he has to try since he cares about Leia.

Meanwhile, Reva informs a handcuffed Leia that the Inquisitors intercepted a transmission on Balnab the previous year, which exposed a secret network known as the Path. The Third Sister explains that the Inquisitors uncovered another safehouse in two systems. She seeks Leia’s help in locating other members of the Path. When Leia asks how Kenobi died, Reva claims that he was burned to death on Mapuzo. Reva claims that the other members of the Path abandoned Kenobi and offers to let Leia return to her family if she reveals where the Path is. Leia replies that she doesn’t know anything about the Path, prompting Reva to reiterate her demand.

Tala’s shuttle lands in Fortress Inquisitorius’ hangar bay. She mingles among the various Imperial officers and stormtroopers and walks towards a checkpoint. When questioned by the sentries, Tala states that she has a Class C clearance and submits her cylinder. A security officer scans her cylinder but denies her entry on the grounds that she is outside her sector. Tala manages to convince the security officer to permit her entry by threatening to report him to the Grand Inquisitor and claiming that she possesses classified intelligence.

Once inside, she contacts Kenobi, who is swimming in the nearby sea with a breathing apparatus. Tala guides Kenobi towards a port control, which she has overridden. Kenobi swims through the port entry and overpowers a stormtrooper sentry. He then enters the base.

Meanwhile, Reva does a mind probe of Leia, who remains defiant. While Reva is distracted, Leia releases her droid L0-LA59. However, Reva catches the droid. She reveals that she had a droid when she was a younger but that it was taken from her. Elsewhere, Tala relays information about Leia’s location within the fortress to Kenobi. Tala is confronted by an Imperial officer, who is suspicious about her presence and ushers her away to verify her identity. Tala leaves her comlink behind, leaving Kenobi to navigate the fortress alone.

Kenobi eludes a patrolling seeker droid and stormtroopers by hiding inside a shaft. After returning to her console, Tala contacts Kenobi with her comlink. This draws the attention of the stormtroopers but the fugitive Jedi uses the Force to distract them. Tala reassures Kenobi that she had some company but that she has eliminated the threat; revealing that she has incapacitated the officer.

Meanwhile, Reva attempts to secure Leia’s cooperation by claiming that the people she is trying to protect are not coming for her. Reva tells Leia that she alone can save herself before reiterating her question. Leia pretends to cooperate but asks Reva to promise that nobody will get hurt. She asks Reva if she can ask her father. With Leia unwilling to cooperate, Reva orders the stormtrooper guards to prepare Leia for torture. Leia is defiant and vows not to tell her captors anything.

Elsewhere, Kenobi uses a pass to gain entry into a secure chamber whose doors are marked with red Imperial symbols. He discovers the remains of several fallen Jedi including a youngling. The stormtroopers fasten Leia into a torture harness while Leia cries for help. Reva is determined to extract the information that she believes Leia possesses through torture. As the machine lights up, the Third Sister gives Leia a final chance but she refuses to cooperate.

Sensing Leia is in danger, Kenobi asks Tala to create a distraction. As two needles approach Leia, an officer enters the interrogation chamber with a message from Tala. Reva grants Tala an audience. Tala claims that the Path insurgents operate from Florrum in the Sertar sector using a salvage business as a front. Tala advises the Third Sister to send Imperial forces immediately to crush the network but Reva realizes that she is lying.

Meanwhile, Kenobi shuts down the lights in the interrogation chamber. He takes out both stormtrooper sentries with his lightsaber and frees Leia from the torture harness. Leia is relieved that Kenobi is alive and tells him that she did not tell the Empire anything. Elsewhere, Reva questions how Leia and Kenobi escaped an Imperial checkpoint on Mapuzo. Tala claims that she is an Imperial spy who infiltrated the Path and claims that Kenobi is on Florrum.

Kenobi and Leia are pursued by a seeker droid. As Reva orders her troops to take Tala for interrogation, the fortress’s klaxons begin ringing. Kenobi contacts Tala via comlink, inadvertently distracting her stormtrooper captors. This allows Tala to break free and take them out with a blaster. Kenobi uses his lightsaber to take out the pursuing seeker droid and stormtroopers in the fortress’ corridors. Kenobi and Leia flee into a tunnel. As Reva, a Purge Trooper, and stormtrooper reinforcements close in on them, Kenobi deflects their blasts, sealing the blast door on their end of the tunnel.

Kenobi uses the Force to delay a cracking window while Tala reunites with Leia. The Purge trooper and stormtroopers force their way through the door and Kenobi releases the broken window, causing the tunnel to flood. The trio escape onto the other side of the tunnel, which they seal temporarily with the blast door. Tala and Kenobi reach the main hangar. Kenobi dons an Imperial greatcoat with Leia hiding underneath.

Meanwhile, the Fifth Brother orders that Fortress Inquisitorius be locked down, blaming the Third Sister for mishandling the situation. He is accompanied by the Fourth Sister. Before Tala, Kenobi and Leia can escape, Reva and several Purge troopers and stormtroopers catch up with them. She denounces Tala as a traitor to the Empire. Tala replies that this was never who she was. Reva then says that they will die for nothing before motioning for the assembled Imperial soldiers to shoot them.

Before the Imperials can carry out their execution, a pair of T-47 airspeeders strafe the Imperial forces on the platform. Tala, Kenobi and Leia take advantage of the chaos to flee. Tala and Kenobi gun down several stormtroopers and a mouse droid during their escape. Sully lands her airspeeder and evacuates Tala, Kenobi and Leia. Reva attempts to pursue them but Wade distracts the Inquisitor by exchanging fire with her. As the airspeeders flee Fortress Inquisitorius, Reva uses the Force to hurl a rectangular explosive at Wade’s airspeeder, causing it to explode. Sully is devastated but flies away. The Fifth Brother scowls at the Third Sister before walking away.

Later, a furious Darth Vader meets with the Third Sister, Fourth Sister, and Fifth Brother. He Force chokes Reva and levitates her. Vader wants to kill her for her repeated failures. However, Reva manages to save her life by revealing that she placed a tracker on their ship. She promises that the Empire will soon uncover the location of the Path network and Kenobi. Vader decides to spare Reva.

The Fifth Brother protests, reminding them that the base was almost destroyed. Vader warns Reva that he will not tolerate anymore mistakes. Reva reassures him that the tracker is properly secured and that they will be able to track down the Path fugitives.

Meanwhile, Sully’s airspeeder is picked up by a larger ship. Roken asks where is Wade. Sully replies that they are now all soldiers now before sitting to grieve her comrade’s passing. Tala offers her a drink while Kenobi sits beside Leia. Leia extends a hand to her rescuer. Leia’s droid Lola beeps and glows red. 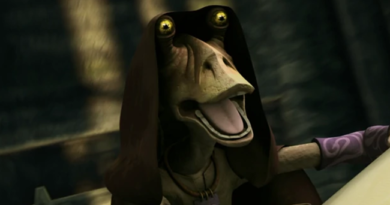 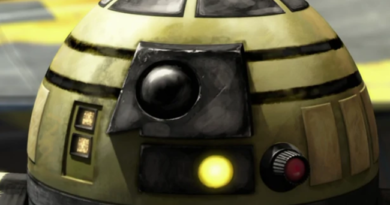 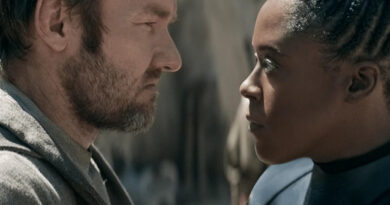