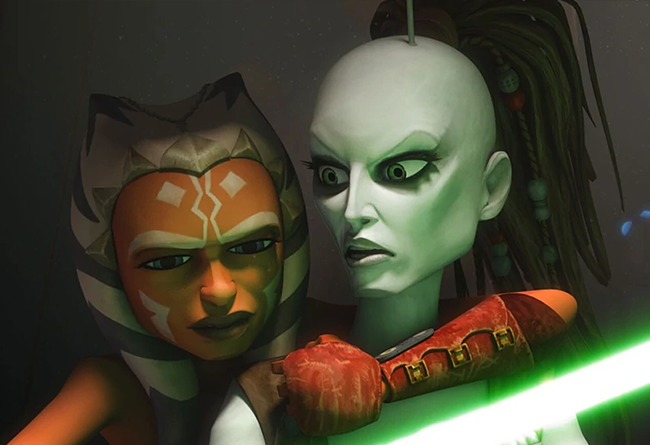 LETHAL TRACKDOWN
Lethal trackdown! The young Boba Fett
has taken the law into his own hands and
made two attempts on the life of Mace
Windu, the Jedi Master who killed his
father. Boba’s mentor, bounty hunter
Aurra Sing, has taken three Republic
officers hostage in an effort to force
Windu to face Boba on their terms, a
tactic that does not sit well with the
young vigilante….

While Anakin Skywalker and Mace Windu recover in the Jedi Temple on Coruscant, they suddenly receive a transmission from Aurra Sing in which she reveals the bounty hunters are holding Admiral Kilian, Clone Commander Ponds, and another clone officer hostage before ruthlessly executing Ponds and taunting the Jedi to track her down. With no leads as to Sing’s location, Master Plo Koon and Ahsoka Tano venture into Coruscant’s underworld in hopes of obtaining information from various members of the underworld. Unfortunately, they experience little luck, due in part to Ahsoka’s impatience and lack of subtlety during the investigation.

Meanwhile, the bounty hunters start to argue aboard Slave I. Castas complains that the job had become far too risky and convoluted, especially as the Jedi Order is now on their tracks. To further complicate things, Boba Fett suffers from a guilty conscience as he feels the prisoners have nothing to do with his quest for revenge on Mace Windu; his relationship with the other bounty hunters, especially Aurra, begins to deteriorate further after Boba refuses to personally execute Commander Ponds during the transmission to the Jedi.

Finally, the bounty hunters make course for Florrum in hopes of obtaining aid and refuge from Aurra’s former lover, who is none other than the Weequay pirate Hondo Ohnaka. While Hondo hospitably invites Aurra for a drink, he nonetheless firmly refuses to provide any assistance, although he also promises to not stand in their way. Castas takes the opportunity to speak with a fellow bounty hunter on Coruscant via hologram and offers to provide information on his fellow bounty hunters. However, his conversation is overheard by Aurra Sing, who then executes Castas on the spot in front of a horrified Boba.

Meanwhile, the two Jedi make their way into another Coruscant cantina. Plo Koon advises Ahsoka to be more subtle and attentive to small details. Coincidentally, Ahsoka manages to eavesdrop on a conversation in which Castas’s “friend” mentions the bounty hunter’s activities on Florrum before being confronted by a large group of thugs. Plo Koon and Ahsoka are forced to draw their lightsabers and manage to leave after a tense standoff.

Soon afterward, the two Jedi arrive on Florrum and make their way into a cantina, empty save for the presence of Aurra at one of the tables. Aurra tries to extract a ransom from the Jedi Master, revealing that she is holding the remaining two hostages at different locations and that they will be executed by Bossk if she gave the word. Both sides then spring their traps, with Boba holding a blaster to Koon’s head while Tano destroys Aurra’s comlink and holds a lightsaber to her throat. The bounty hunters manage to make a diversion and escape, but Boba is captured at the last second while Aurra leaves on an air speeder with Ahsoka in close pursuit.

Plo Koon then interrogates Fett, who stubbornly refuses to disclose the hostage’s location; Hondo finally manages to persuade Boba by reminding him how Jango would have wanted his son to do the honorable thing. Ahsoka learns of the admiral’s location via comlink and manages to help subdue Bossk, only seconds before the hostages are to be executed. However, Aurra arrives a few moments later and manages to take off in Slave I. Ahsoka clings onto the ship and even slices off one of its stabilizers with her lightsaber, causing the bounty hunter to lose control and crash in a fiery explosion.

The final scene depicts Boba and Bossk in custody arriving on Coruscant where they are met by Mace Windu. Boba apologizes for the destruction he has caused, but insists he would never forgive Mace for killing Jango, before being taken away. 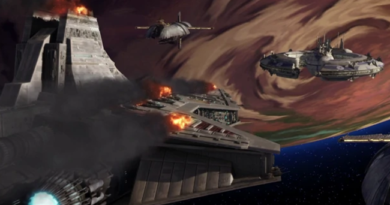 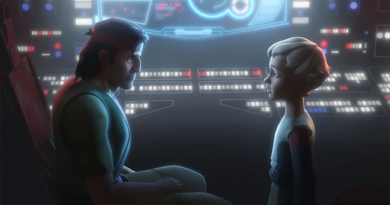 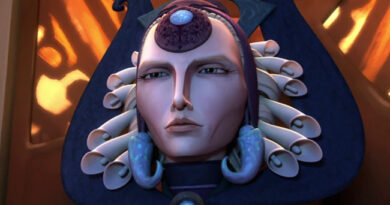 One thought on “The Clone Wars S02E22 Lethal Trackdown”