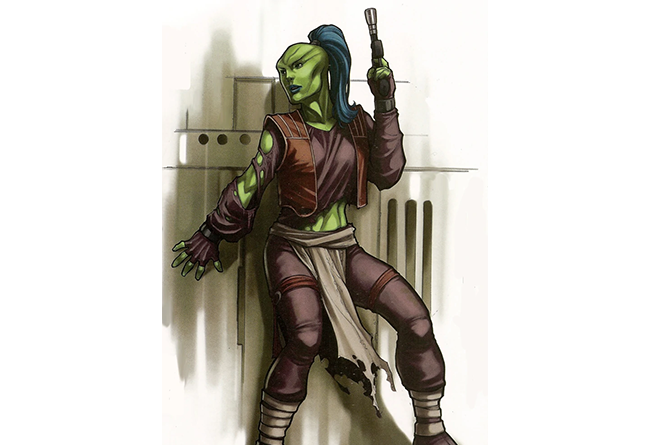 Special Abilities:
Attraction Pheromones: +1D to Persuasion and +1D for each hour of continuous preparation in meditation to enhance efforts. This may total no more than +3D for any one skill attempt and the attempt must be made within one hour of completing meditation. Changes skin color
Amphibious: May breathe water for up to 12 hrs., +1D to swimming.

Story Factors:
Falleen are rarely seen throughout the galaxy since the Imperial blockade in their system severely limited travel to and from their homeworld.

Background: Falleen were a repto-mammalian sentient species native to the planet of the same name. They were capable of projecting powerful pheromones. During the Clone Wars, the Black Sun criminal syndicate was run by a cabal of Falleen nobles, Ziton Moj, from their fortress on Mustafar.

The Falleen were a repto-mammalian sentient species who had a distinctive alien appearance. They were distinguished by their mottled green skin, ridged skulls, and their long, black hair which they typically wore in ponytails. Falleen exuded powerful pheromones which they used to attract mates.

Falleen were native to the planet Falleen, but were a colonial species who had migrated and adapted to dominate many worlds. and so also inhabited Ord Mantell alongside a human population.

During the Clone Wars, a cabal of Falleen nobles led the Black Sun criminal syndicate, which flourished while law enforcement declined as the Jedi focused on battling the Confederacy of Independent Systems. Black Sun became notorious in the lawless Outer Rim Territories and elsewhere, and its Falleen leadership operated out of a well-defended fortress on Mustafar. Xomit Grunseit led the cabal until Maul ultimately usurped control of Black Sun, and installed the leg-breaking lieutenant Ziton Moj as its ruler.

Black Sun was also involved in an underground dispute with the Pyke Syndicate, which led to Asajj Ventress and Quinlan Vos investigating a kidnapping by the Pykes. Ventress coerced a Falleen guard on Mustafar, leading him to believe his powerful pheromones had worked on her, and she and Vos strong-armed him into giving up information on the Pykes. The pair infiltrated the Black Sun fortress, fighting more Falleen to reach the kidnapped family.

During the reign of the Galactic Empire, Falleen like other alien species such as Umbarans and Neimoidians, were typically the butt of running jokes at Imperial Academies including the Royal Imperial Academy on Coruscant. At this time, the Falleen Ango Croom led the Varluk Organization. A Falleen gangster named Annaz was the leader of the Malandro syndicate before his death at the hands of Brand, whose parents he had formerly killed. A number of Falleen worked as overseers in MaDall’s slaving operation on Oon, and treated Sabine Wren roughly when she posed as a slave to infiltrate the operation. She inspired an uprising against the slavers, and the Falleen guards were attacked and overpowered. 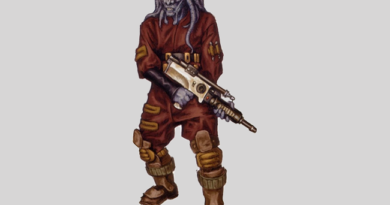 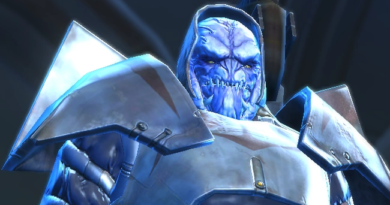 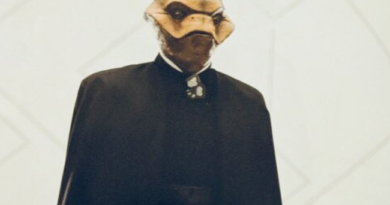