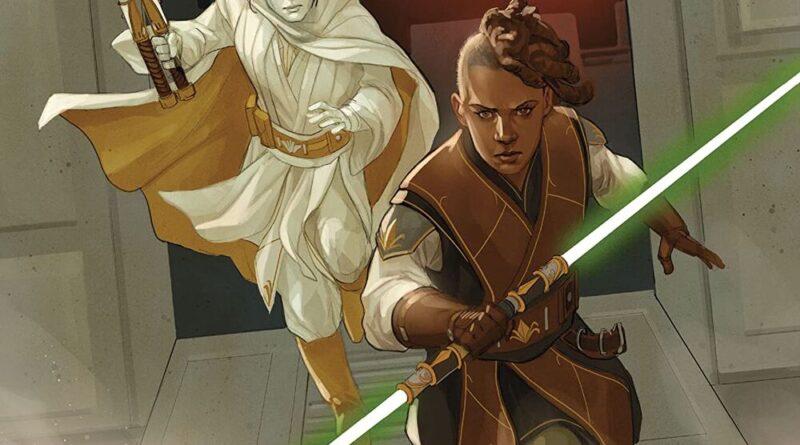 THE HIGH REPUBLIC
HEART OF THE DRENGIR
CHAPTER III: The Root of Terror
As the galaxy prepared to celebrate the
REPUBLIC FAIR on Valo, a fierce battle rages
in the depths of Wild Space.

Marshal Avar Kriss has gathered a task force
of Jedi and Hutt enforcers to take the fight to
the evil DRENGIR, targeting the source of
their power on the forest world of Mulita.

Jedi and Hutt stand shoulder to shoulder in
battle, but there is no sign of troubled Jedi
Knight Keeve Trennis….

On the Starlight Beacon, Jedi Masters Estala Maru and Sskeer talk by hologram. Sskeer requests reinforcements, but Maru says he already explained that they’ve sent every Jedi they could muster. When Sskeer suggests he find more, Maru archly asks how he is supposed to do so, given that they are dangerously close to stepping on the Jedi High Council’s toes due to other goings-on, namely the Republic Fair, although the Fair is the last thing on Sskeer’s mind. Sskeer’s transmission cuts off mid-sentence, to Maru’s exasperation, and he asks Administrator Velko Jahen if they can boost the transmitter array. She says they’re trying, but something is wrong with the communications array as a whole, and Chief Norne has dispatched a maintenance team. Turning to his astromech droid, Maru asks KC-78 if he’s had any luck raising Jedi Council member Stellan Gios on Valo, getting into a small argument with the droid as KC does not believe in luck as a concept, but Maru will take any help he can get.

On Mulita in Wild Space, Sskeer comments that they appear to be on their own as he, many other Jedi, and Hutt Clan forces battle against the Drengir. Myarga the Hutt quips that she thought Jedi were never on their own, leading Sskeer to retort that this is hardly the time for semantics. She says that’s something they agree on, expressing a desire to have the Great Progenitor’s head mounted on the wall of her dreadcruiser. When Sskeer comments on that, Cohmac Vitus says he hadn’t figured the Drengir for trophy collectors, and Myarga agrees that Sskeer would know. The Trandoshan expresses irritation, stating that the Drengir’s hold over him was broken long ago, but Myarga points out this is due to his former Padawan, who is not present. Sskeer asks not to be reminded, wishing that Keeve Trennis was at his side.

A surge of vines knocks Sskeer from the rancor he is riding and entangles Myarga’s battle sled. As the Hutt requests to be freed, Sskeer suggests she do it herself. Myarga quips that he’s spoken like a true servant of the Republic, as another Jedi wonders about the source of a sudden chittering sound. Bond-twins Terec and Ceret find it fascinating that the Drengir appear to have weaponized a local arthropod to act as guards, comparing it to the symbiosis between Kashyyyk’s shi-shok trees and charr ants. Myarga snaps that nothing about the situation is fascinating and they should deal with them, leading Sskeer to remind her that the Jedi are not her private army. The arthropods come under attack, and Myarga says their Force abilities are most appreciated, but Sskeer denies responsibility for the attack.

The assist comes from Keeve Trennis and her companion, Jedi Wayseeker Orla Jareni. Keeve introduces Orla to the others, but she already knows Sskeer from a long time ago. The Umbaran says that’s one way of looking at things, using a phrase that leads Sskeer to ask her not to say things like that in front of the Hutts. Cohmac says the two of them haven’t changed and are still an explosive combination, leading Keeve to comment that she does not want to think about it if she’s ever going to sleep again, before asking where Avar Kriss is. The twins say the last time they saw her, the Marshal was heading to face the Great Progenitor in the centre of the forest. Keeve responds that that is exactly what Avar should not do, asking Orla to bring Sskeer up to speed. Orla says she will, and it won’t be for the first time, leading Keeve to thank her before being quietly incredulous.

As Keeve heads off, Terec offers to help, being appreciative when Keeve is able to correctly identify them. Keeve comments that she is getting better at telling the twins apart, but Terec’s warning of an approaching obstacle comes too late as she trips over what she discovers to be Nihil remains, expressing surprise that they have apparently been on Mulita. Just then, Terec senses something and asks Keeve if she does as well, Keeve becoming concerned about Avar and realizing it’s a trap, slashing through some vines. Finding Avar in the grasp of an enormous Drengir, Terec comments that they think she knows as Avar wakes up and sees Keeve. Terec asks if they should call the others, but Keeve says they are enough and always have been as she puts her lightsaber together. As the arthropods approach, the Progenitor calls Keeve a foolish child, saying that the harvest will be theirs and the Jedi will, like the dark lords and thieves who came before them, help spread the empire of thorns.

Terec asks about the dark lords, and Keeve explains they were the ancient Sith, who imprisoned the Drengir on the Amaxine station before they were eventually freed by Jedi. Keeve admits the Progenitor is smart, having intentionally given out her location knowing that Avar would lead the charge. Bonding with Sskeer was one thing, but Avar Kriss has abilities that none of the other Jedi do in connecting them all and being their Root Mind. The Progenitor uses Avar to Force choke Keeve, stating that the Marshal will lead the charge as the Jedi spread the Drengir far and wide, stating the question is whether Keeve will join the darkness or die by her hand. But Keeve simply responds that that is not the question at all: the real question is when the Progenitor will realize she has kriffed up.

The Progenitor assumes that the Jedi plan to do the same as the enemy they despised, but Keeve says that they did it to protect themselves, while the Jedi do so to protect everyone else. Myarga, observing, demands to know where the Progenitor is so she can tear it out by the roots and burn its forest to the ground, ordering her soldiers to take aim. Avar tells her to stand down, explaining that they protect life. The twins explain they have brought along stasis-field generators to disrupt the telepathic connection between the Progenitor and the rest of the Drengir, although they still have to deal with the root of the problem. Myarga says that is what she intends to do, but Keeve destroys her whip, saying that will not happen today and they are putting right a terrible mistake. On Cohmac’s order, Reath Silas activates the generators, sealing the Progenitor inside of the field as Sskeer declares the situation finished.

Myarga disagrees as long as the creature still lives, but Keeve says that the Hutts and the Republic are both safe as long as the Progenitor is inside the field. Orla says it will be secured in the Bogan Vault on Starlight, and the Drengir will sleep once more. Myarga refuses to sleep until she has bathed in the monster’s blood, and Keeve asks if the Drengir even have blood. Avar responds that they will never find out, because for Myarga to be able to make good on her threat, she will have to go through all of the Jedi. Keeve asks what she will do.

Watching as the Hutt forces depart Mulita, Keeve says that their alliance appears to be at an end. Avar agrees that is the case for now, but points out they don’t know what the future will bring. The Marshal thanks Keeve, but Keeve says that both of them were necessary. Just then, a transmission comes in from Maru on Starlight. Commenting on the timing of the comms restoration, Avar thanks him on his good work, and Keeve exclaims that they defeated the Drengir. Maru asks if that’s her, and Avar says that Keeve arrived just in time. Avar tells Maru to inform Council Member Gios of their success, and he says he is calling because he just got off the comms with Stellan because of the Republic Fair. When Avar asks what of the Fair, Maru says that it’s gone. Avar demands an explanation, and Maru, staring at a hologram of the devastation on Valo, says that the Nihil have returned, and this time, they could not be stopped.