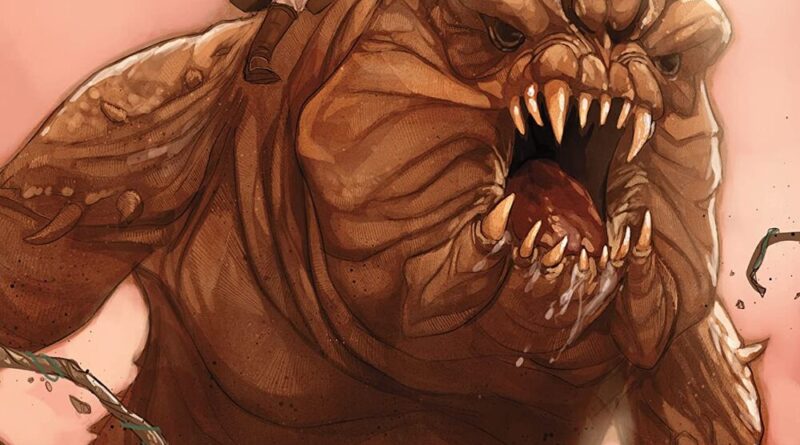 THE HIGH REPUBLIC
HEART OF THE DRENGIR
CHAPTER I: THE GALAXY UNITES
The Drengir assault on Starlight Beacon and
Sedri Minor was stopped thanks to an
uneasy alliance between the Jedi and the
Hutts.

Jedi Keeve Trennis’ desperate gambit to
help stop the attack paid off…but may have
cost the life of her former master Sskeer.

Now a much greater conflict is about to test
Keeve and the Jedi like never before.

Daivak, in the Outer Rim Territories. Keeve Trennis notes that the last few months have been hard on everyone, as the frontier has changed. Excitement has turned to uncertainty, and hope to fear. She thought that they won when they stopped the Drengir, but the carnivorous plants returned stronger, taking root on hundreds of worlds, and her exhaustion is growing. Avar Kriss says it’s a defining moment, a challenge only the Jedi can face, as in darkness, they are the light. Alongside Hutt forces led by Myarga, Avar and the twins charge into battle, as Keeve wonders if she’s wrong and it is already too late.

Myarga believes their forces are unstoppable, but Avar cautions that pride is just as much of an enemy as the Drengir she cuts down, warning her ally to stay focused. The Hutt believes that she should have been allowed to blast the Drengir from orbit with her deathcharges, but the twins note that they would have wiped out all life on the planet, including what they’re trying to protect. Myarga concedes, but thinks it would have been fun.

On Starlight Beacon, Estala Maru hopes to KC-78 that Avar hasn’t misjudged the situation, given how challenging their new allies are. He receives a hologram call from Stellan Gios, who notes that members of the Jedi High Council share his unease about Avar’s pact. Maru notes that as unconventional as the alliance is, it is delivering results, as the Drengir’s advance across the frontier is slowing. Stellan says it should never have begun, before asking Maru about the other matter the Council is still waiting on a report about. Apologizing for the delay, Maru says that unfortunately, Sskeer’s condition has barely changed.

Keeve, keeping watch over her former Master, knows she should be out there with Avar and the others, but she can’t as long as Sskeer is stuck in stasis. Doctor Gino’le told her the stasis field was working to keep Sskeer’s infestation in check, but that’s only half the story, as she can sense him slipping away. She regrets listening to him on Sedri Minor, as while they bought themselves time, she wonders at what cost, and wishes she had found another way. Keeve asks Gino’le if they can run another tissue scan, and when he says they’ve done a dozen, she says they need to run more. She tells the Anacondan that before, Sskeer told her he was losing his connection to the Force, and that there had to be a a reason. Noting he is not an expert in such things, Gino’le asks Keeve if she has considered the idea that the cause is not physical at all, but that Sskeer might be suffering from a crisis of faith. Keeve asks him to run just one more scan, and he obliges. She believes that there has to be more to the situation, as Sskeer taught her everything she knows, and he was always steadfast. She wonders what Sskeer’s state means for the rest of them.

On Daivak, Ceret reports to Avar that they have found the settlers, but they are already dead, drained of all nutrients. Avar vows to redouble her efforts, saying there has to be a way to stop the slaughter. She is forced to leap from her rancor mount when it is attacked by a Drengir, and as Terec expresses concern, Avar says that the Force protects her as she pushes away nearby Drengir. Myarga kills the infected rancor over Avar’s objection, saying that bleeding hearts rarely win wars. Noting that the situation is getting out of control, Avar calls Starlight for reinforcements, asking for every Jedi on the Beacon to be scrambled.

Onboard the space station, Maru reminds Keeve about Avar’s order, but she says she can’t leave. He says this is non-negotiable, ordering her to meet him at Hangar Bay Five. Keeve is shocked that Maru is leaving the station, but he replies that Avar needs them. Deciding that that settles things, Keeve deactivates the stasis field, telling a shocked Gino’le that this is about more than just Sskeer, as he’s their key to fighting the Drengir, but he can’t do it on his own. Waking up, the Trandoshan’s Drengir arm seizes Keeve by her neck as he mutters about fresh meat. As tendrils enter her nose and mouth, Keeve thinks to Sskeer that he needs to listen to her and control it before it controls him, winding up in a strange mindspace as she finishes her sentence. She is met by Sskeer and gives him a hug and tells him how happy she is to see him, which he notes is not the Jedi way, but neither of them care.

Keeve asks Sskeer about the place they’ve found themselves in, and he explains it’s how their enemy communicates, noting how fascinating Archivist OrbaLin would find it were he present. Keeve responds that if he were, he would never shut up. Sskeer explains that the space is a representation of the Root Mind that connects all Drengir, but he doesn’t know if the connection is through the Force. Keeve asks Sskeer about what he told her on Sedri Minor, but he says that now is not the time, and she responds that that conversation will come eventually. Sskeer agrees, but says that for now they need to concern themselves with what lies at the heart of the system, which he was not strong enough to see. Keeve responds that it’s a good thing she’s here, although, as tendrils seize her, she adds that someone clearly disagrees. When Sskeer suggests that the Drengir don’t like them rooting around, Keeve is astounded that he seems to have made a joke, taking it as a sign of trouble.

On Daivak, Myarga is aggravated about how difficult the Drengir are to fight, since they grow faster than they can be cut down. Avar tells her she should consider herself lucky she can’t hear their song, which grows more discordant with every passing moment. Sensing something that shocks her, Avar contacts Maru on Starlight, asking if Keeve is with him as she can hear Keeve’s song within the Drengir. Stunned, Maru comms Gino’le and asks him where Keeve is, only to be told to see for himself. Arriving in the medical bay to see Keeve and Sskeer in the stasis field, Maru tells Avar they have a problem. Gino’le explains that Keeve infested herself, and that he re-established the field to slow its progress. From inside the field, Keeve says that they’re searching for the heart of the Drengir. Avar asks what that means, remembering that Sskeer talked about the Great Progenitor, the oldest and most powerful Drengir. Keeve says it’s the first seed, but it doesn’t want to be found, and that she thought herself and Sskeer would be strong enough together, but she is wrong, as they are now mentally bound inside the Root Mind.

Maru and OrbaLin throw their Force powers behind Keeve and Sskeer to help them, leading to their mental release. Suspecting the Archivist’s handiwork, Keeve says that she takes it back and he can talk as much as he wants. Sskeer tells her to grab the roots that were holding them before they retreat, and the two are pulled in the direction they need to go: the Great Progenitor. The Trandoshan names it as the cause of much pain and suffering, and Keeve comments that it’s also physically large. Noting the unreality of the mindspace they are in and that two can play that game, Keeve uses her powers against the Progenitor, who finds their presence impossible. Keeve asks it where “here” is, suggesting that since the Progenitor has been inside their heads, it’s only fair that the favor be returned. Outside, Maru asks Keeve what is happening, and she says that the Progenitor is trying to stop her, but it’s too late, as she can see inside its mind.

In the Root Mind, Sskeer yells as Keeve is stabbed by one of the Progenitor’s vines, as it says that the root must be protected and the harvest will be theirs. Vowing that he won’t lose her, Sskeer moves in the real world and rips his vine-arm off. On Daivak, Avar hurriedly calls Starlight, noting that something has happened to the Drengir, which are now screaming. Maru explains that Sskeer has severed his connection with the plants. Avar asks if they have the location of the Progenitor, and Sskeer believes they have failed. However, Keeve says he speaks for himself and asks him what he makes of some scratches from the thorns on her wristband: in Aurebesh, the word MULITA. Keeve says it’s amazing what you can find when rooting around inside a Drengir’s brain, noting the trouble with telepathy is that it cuts both ways. Looking up the name in the Jedi Archives, Maru tells Avar that there is no planet named “Mulita” in the Galactic Republic, but the ancient records mention a system by that name, dating back to the days of the Nightmare Conjunction, deep in Wild Space. The Great Progenitor is now within their grasp…

SWRPGGM · 7 hours ago
@swrpggm
Hey @DisneyPlus why are you preventing me from using your service unless I provide detailed personal information that I have no desire to share with you. This makes me want to #unsubcribe
View on Twitter
0
0

SWRPGGM · 13 hours ago
@swrpggm
Episode titles for #TheBadBatch were released today with the trailer. https://t.co/5sLFypPdTj
View on Twitter