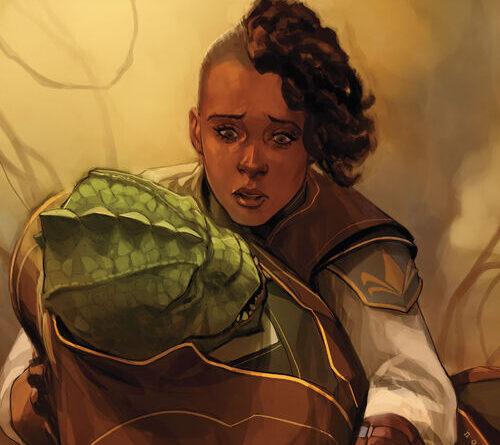 THE HIGH REPUBLIC
THERE IS NO FEAR
CHAPTER V: Attack of the Hutts
A derelict Hutt ship. A Nihil incursion.
Missing colonists. Starlight’s Jedi hunt for
answers leads them into a deadly trap set by
the monstrous DRENGIR.

On Sedri Minor, Sskeer managed to break
free from the Drengir’s control, saving
Keeve Trennis and their fellow Jedi.

While the Drengir assault Starlight Beacon,
the HUTTS arrive on Sedri Minor to protect
their holdings. The Jedi now face impossible
odds in a three-front war….

War on all fronts

Keeve Trennis uses Jar’Kai to deflect blaster bolts, telling colonists to move as she will not be able to hold them off for long and thinking that it did not have to be this way. Ceret says they can get them clear, but Keeve notes that the Kotabi is still too weak. Ceret responds that the Force is strong, as Keeve thinks that if only they had talked and listened to each other, none of this would have happened. The colonists are confronted by a Gamorrean riding a rancor, and as they flee, Ceret tries to hold them back. Keeve wonders if Jedi aren’t supposed to make things better, as Ceret, weakening, is stomped on by the rancor.

Earlier, Marshal Avar Kriss is greeted by the Hutt Myarga the Benevolent, who insists that the Jedi leave Sedri Minor. Avar asks about the claim, noting that Sedri is not in Hutt Space. Myarga claims that the colonists have signed a contract with the Hutt Cartel for protection in exchange for regular shipments of grain. Sskeer, watching, notes that this is nothing but a protection racket and asks why Avar does not do something. Keeve reminds him that she is negotiating. Affected by his Drengir infestation, Sskeer decides it is not enough and lashes out at Myarga with his plant arm. The infuriated Hutt responds by commanding that the Jedi be torn from limb to limb. Keeve remembers that this is when everything changed and she realized that her Master was gone, possibly forever.

Avar and Keeve defend themselves against attacking mercenaries, wondering how many there are aboard Myarga’s vessel. Noting that there are enough to start a war, Avar calls Starlight Beacon for reinforcements. However, Estala Maru has bad news of his own: the space station is dealing with a serious Drengir infestation. Vernestra Rwoh suggests breaking a viewport to blow the infected into space, but Imri Cantaros counters that that will do nothing to help those who have been infected. A Drengir snags Imri from behind and declares that the harvest has already begun, leading the Padawan to apologize to Vernestra. She tells him not to give up, noting that she may be new to the master-apprentice game, but one thing her own Master taught her was that there is always time for another lesson, switching her lightsaber to lightwhip mode and freeing Imri from the grasping vines.

Maru apologizes to Avar that she will have to resolve the situation on Sedri Minor without any further help. Avar asks Keeve where Ceret is, and she notes that they are “keeping busy!” The Kotabi Jedi Knight holds open the rancor’s mouth, wishing for a lightsaber. Fortunately, their bond-twin Terec arrives with both twins’ weapons and attacks, knocking the Gamorrean out of the saddle before putting the rancor to sleep. Ceret is still rattled by their experience at the hands of the Drengir, but Terec reassures their sibling that that is the past, and they will never be separated again. The twins charge into battle.

Avar says that the Hutt army will not stop until their commander is free, and orders Sskeer to release Myarga. Keeve states that neither of them are listening. Myarga growls that Sskeer is “Trandoshan scum” and that the entire species is all just “worthless lizards” no matter how they are dressed. Keeve buts in that no one is worthless, especially not Sskeer, but the Hutt yells that the Jedi are closing ranks and asks if she cannot see that he is diseased. Keeve retorts that she sees someone who is in pain and has lost himself, asking Sskeer to come back to her. He does not know if he can control it, however. Keeve, fitting her split saber together, retorts that he does not have to do it on his own and severs the Drengir arm.

Myarga, freed, declares herself “The Merciless” and proclaims that no Jedi will be free from her wrath. Avar blows her back and argues that there are larger forces at play here which put both the Republic and Hutt territories in danger. Sskeer is still infected, and the Drengir take him over, asking Keeve if she thought that severing the arm would stop them. When she says that she did, the infected Sskeer claims that she proves his point and does not deserve to live. Keeve appeals to Sskeer, stating that this is not him.

Speaker Kalo Sulman fills a sack with valuables, deciding to cut and run. However, a group of colonists led by Julus’ parents and Bartol block his path, furious with him. He claims to have been arranging a shuttle offworld for anyone who wants to come, but Neeso calls him out as a liar, noting the Drengir presence and that the Jedi should have been called as soon as the disappearances started, but Sulman preferred to take their credits and beat them if they dared to speak out, which led to his son’s death. Reeta notes that hitting Sulman will not bring their son back, although he notes it makes him feel better. Sulman tries to argue that they are not so different, but is interrupted by a rancor smashing through the wall, leading the Artiodac to retreat.

Keeve duels Sskeer, trying to get through to him even though the Drengir claim that he is gone. She kicks him back, and Sskeer regains control for a moment, telling Keeve that she needs to know why he did this. Keeve notes that he said it was to find out what they were planning, but he admits it was not his entire reason. His connection to the Force has been fading for some time: he had no idea that the ridadi swarm that attacked Shuraden during Keeve’s Jedi Trials was coming, and he failed to sense the dark side when he arrived on Sedri Minor. Keeve asks why he did not tell her this earlier, and he says it was out of shame, as he felt that he had let her down. Keeve insists otherwise, but he says that it no longer matters: the trouble with plants is that all they need to get started again is just one seed, one tiny scrap in the dark, and they will grow back stronger than before. Keeve says there has to be something they can do, and Sskeer agrees there is one last chance at survival, but she is not going to like it.

Myarga insists that Avar cannot win this fight, but Avar counters that neither of them can. Contacting Maru, she asks him if he is still receiving distress calls about the Drengir, and asks him to put them through to her comlink. Some of the calls come from Nal Hutta itself, to Myarga’s horror as she wonders if it is a trick. Avar says that the entire Galactic Frontier is under attack, and neither side can stop them on their own. Myarga says that the Five Families will never condone joining forces, and Avar says that if she is not interested, the Jedi will leave Sedri Minor since the Hutts claim it and the Jedi have enough of the galaxy to protect. Changing her mind, Myarga asks Avar to not be so hasty and agrees to an alliance against the Drengir.

Sskeer tells Keeve that she is crucial to stopping the Drengir, explaining that they follow impulses transmitted through their telepathic root system, requiring them to feed and defend themselves. He suggests that Keeve try to convince the Drengir that all of their meat is spoiled through an immense mind touch. She does not think it will work, but he says it will if he lowers his defences to someone he trusts. The Drengir fight Keeve’s initial attempt, so she strengthens it, telling the Drengir they want to run because the harvest is rotten and will poison them all, placing her hand on Sskeer’s head as he screams.

As the Drengir retreat, Myarga asks what they are doing, and one of the twins notes that they are retreating. Declaring the Drengir to be cowards, Myarga opens fire and orders her forces to tear them to shreds. On Starlight, Maru reports to Avar that the Drengir are retreating as well, but Avar does not know why either, and Maru hopes that the tide has turned. Avar suggests that they not get ahead of themselves, since from what Sskeer said the Drengir do not give up. Myarga opines that Sskeer should be killed, but Avar refuses, stating that whatever the Drengir did to him, he will be restored. Keeve panics over an unconscious Sskeer, noting that this was not part of the plan and asking him if he hears her.