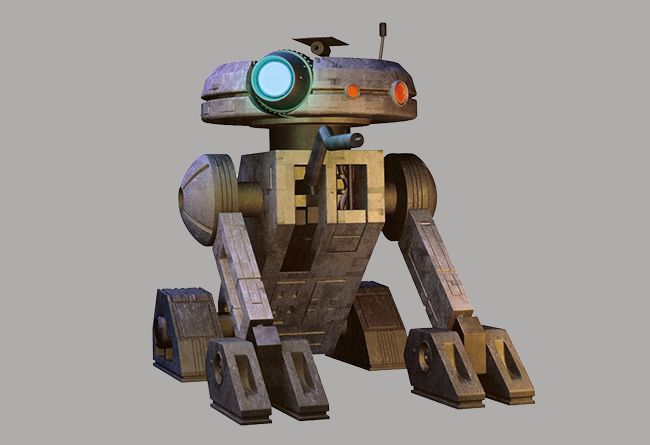 Background: The T3-series utility droid was a Utility droid produced by Duwani Mechanical Products at some point prior to the Great Droid Revolution. They remained popular for years to come and, despite being in use for approximately 130 years, were still the most recent of a long line of physically identical models as of 3956 BBY. Earlier models in the same series included the 3C, IT, and T1 models. Designed to function as a maintenance droid for a variety of mechanical and electronic systems, the T3 was internally more advanced than its predecessors.

The T3 droid was originally designed for repair and general maintenance duties and worked at its optimum level aboard starships. As with other utility droids of the era, the T3 unit had four wheeled legs, of which the front two were attached to the droid’s blocky chassis by rotating joints, allowing the droid to slide backwards and forwards to adjust the unit’s height. The T3’s roughly toroidal head featured a large main photoreceptor and two secondary ones, a broadcast antenna and vocabulator that allowed the droid to communicate in Droidspeak. Without periodic memory wipes, these models developed personality and behavioral traits. It was even known for some units to form gangs, making a living as thieves. Others sold their computer-slicing skills to criminals.

The sophisticated mechanical and computer training software loaded into the T3 utility droid allowed it to function in the capacity of an engineer or even a copilot aboard a starship, making it a favored purchase for traders and smugglers alike. One common modification was the addition of a starfighter interface package, allowing the droid to plug directly into a specialized slot on a starfighter, granting starfighter pilots the same benefit that transport pilots have come to expect from the T3. Though this after-market modification was not endorsed by Duwani, many fighter pilots insisted that their ships and droids receive these modifications on the grounds that they increase pilot survivability. Some custom T3 droids also had weapon mounts able to fit a number of readily available blaster pistols mounted in the droid, which was considered an unusual feature for a droid designed for everyday tasks. One of the most famous droids of this series was T3-M4, a prototype of an upgraded T3 unit Duwani introduced prior to the Jedi Civil War. During the time of the Galactic Alliance, what few T3 units remained in the galaxy were seldom found outside of private collections. 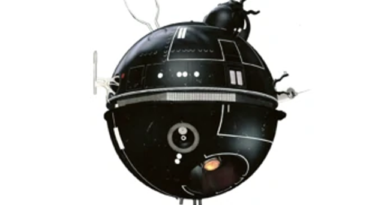 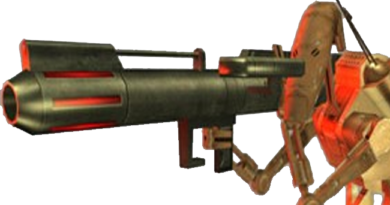