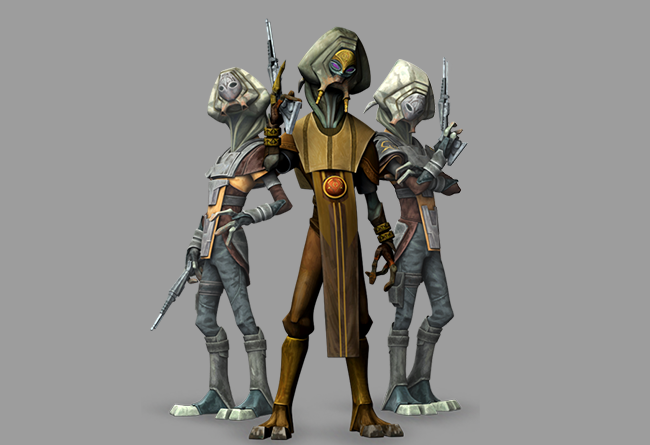 Special Abilities:
Atmospheric Allergies: Pykes are known to have allergies to certain types of polluted atmosphere, such as that of mining world Kessel. Although these allergies require breathing apparatuses for Pykes to function without ill effects, they have also not been shown to have dangerous effects, beyond the creation of excess mucus collection in their masks’ breather tubes. In game terms, consider Pykes to suffer -1D penalties to all physical skills, when in similarly polluted atmospheric conditions without a proper breathing apparatus.
Unsettling Appearance: In game terms, Pyke gain a +1D bonus to intimidation, despite their slight stature, because their appearance is often regarded as unsettling to other humanoid species

Stork Links:
Deep Cultural Ties to Narcotics Trade: Because the Pykes are so closely associated with the spice trade, having long ago swayed King Yaruba of Kessel to grant them exclusive control, those who are members of / in orbit of the Pyke Syndicate will have some insider’s understanding of the spice trade. In game terms, if a Pyke character is involved with the Pyke Syndicate, he gains an additional +1D of starting skill dice to put toward 3 specializations focused upon spice or spice mining. These can include spice-focused specializations in: business, bureaucracy, scholar, streetwise, value, and bargain. However, if a character takes this bonus upon character creation, he must also take the associated, overtly dangerous Story Factor below as well.

Envied by Rivals: The Pykes’ control of Kessel is envied by many in the criminal underworld, those who think the syndicate unworthy of hoarding such riches. Because of this, known members of the Pyke Syndicate, as well as Pykes overall, are likely to become targets of rival criminal organizations.

Exo-Helmets and Cultural/Functional Masks: With the exception of Pyke Syndicate members in positions of power, many members of the species who are lower in the cultural hierarchy, or are travelling off-world, conceal their faces behind Exo-Helmets that mimic the natural shape of their skull, as well as flat featureless masks with only eye-slits and breather tubes. Although seemingly worn for cultural reasons, the demands of atmospheric allergies have prompted the Pykes to incorporate breathing apparatuses into these masks as well.

Save Face, Show No Weakness: Although the cultural practice is most prominent amongst members of the Pyke Syndicate criminal organization, Pykes will usually go to great lengths to protect their own and their own interests. As Minister Lom Pyke did during the Clone Wars — first by proactively approaching Darth Maul’s Shadow Collective in order to avoid being challenged, then by securing leverage against Count Dooku by taking Silman hostage — and then as Marg Krim did — when members of his own family were kidnapped — Pykes will take pains to avoid showing weakness and perceived vulnerabilities to outsiders.

Background: The Pykes were a species of sentient humanoids native to the planet Oba Diah. The species was distinguished by their unsettlingly large heads and undersized faces. A notable group of Pykes was the Pyke Syndicate, the galaxy’s preeminent suppliers of spice, a narcotic substance mined by slaves on the planet Kessel.

A sentient species, the Pykes were humanoid, although slimmer and taller than most humans. They had two long, lanky legs, and two arms that ended in three-fingered hands. Their heads were large and elongated, with a tapered skull and a proportionately undersized face, a feature which some other species found unsettling. Pykes had two narrow, almond-shaped eyes which could be magenta or blue in color. The species had two sexes, male and female. Pykes had yellow blood.

Pykes hailed from Oba Diah, a terrestrial planet marked by obsidian cliffs. Visitors to Oba Diah viewed both the population and terrain as unwelcoming. The Pyke homeworld served as the headquarters of the Pyke Syndicate, a criminal organization which profited from distributing spice, an illicit substance harvested by slaves in the spice mines of the planet Kessel. The Pykes on Kessel had to wear special breath masks and lead-lined clothing to protect themselves from the planet’s harsh climate. To deliver spice to their customers, such as crime families on Coruscant, the Pyke Syndicate relied on smugglers and freighter captains to complete the dangerous Kessel Run. 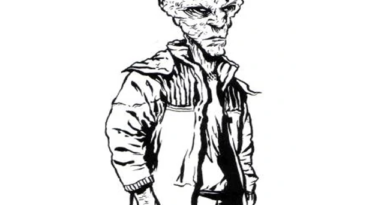 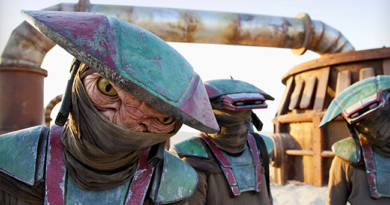 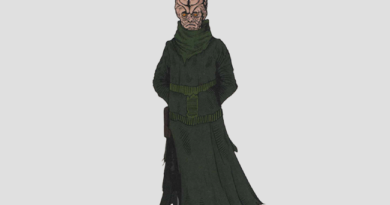