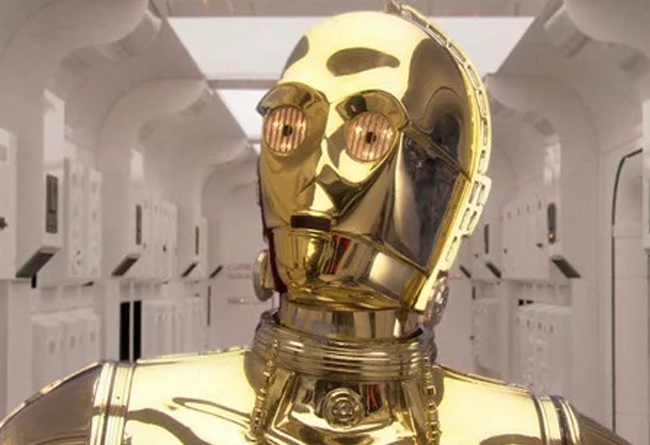 Background: C-3PO, sometimes spelled See-Threepio and often referred to simply as Threepio, was a 3PO-series protocol droid designed to interact with organics, programmed primarily for etiquette and protocol. He was fluent in over six million forms of communication, and developed a fussy and worry-prone personality throughout his many decades of operation. Along with his counterpart, the astromech droid R2-D2, C-3PO constantly found himself directly involved in pivotal moments of galactic history, and aided in saving the galaxy on many occasions.

C-3PO was rebuilt from spare parts by Anakin Skywalker, a human slave who lived in Mos Espa, a city on the Outer Rim world of Tatooine. Shortly after the Clone Wars, C-3PO’s memory was erased, though R2-D2’s memory was not. C-3PO and R2-D2 were assigned to the Alderaan cruiser Tantive IV, where they served senator Bail Organa for nineteen years. At some point during this time, 3PO’s right leg was fitted with mismatched plating.

They became embroiled in the Galactic Civil War when Leia Organa of the Rebel Alliance entrusted them to bring a copy of the Death Star plans to the Jedi Master Obi-Wan Kenobi on Tatooine. After meeting Skywalker’s son, Luke and the smuggler Han Solo, the droids helped rescue princess Leia from the Empire’s Death Star. They became directly attached to the three humans, helping them and their rebellion defeat the Empire and restore freedom to the galaxy, most notably when he convinced the Ewoks to aid the Rebels at the Battle of Endor.

Following the Battle of Endor, C-3PO continued serving the Skywalkers and Han Solo during the time of the New Republic. About thirty years after the events on Endor, C-3PO was still an aide to Leia Organa, who had become a General in the Resistance, a private military group opposed to the First Order, a military junta that emulated the Old Empire. By that time, C-3PO’s language database had been updated so that he could understand and communicate in over seven million different forms of communication, including ancient Sith dialects.