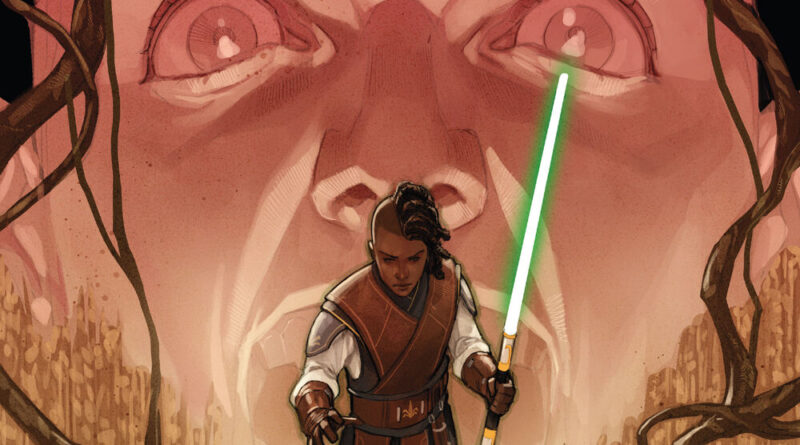 THE HIGH REPUBLIC
THERE IS NO FEAR
Chapter III
“Down Below”
The noble JEDI, protectors of the REPUBLIC,
have launched STARLIGHT BEACON as a
symbol of hope for the galaxy. Young Keeve
Trennis is now a JEDI KNIGHT.

Aboard a derelict Hutt ship, a lone Nihil warrior
attacked Keeve, Sskeer and the Jedi twins Terec
and Ceret. Sskeer brutally slaughtered the
Nihil, much to Keeve’s shock. Something dark is
happening to Sskeer.

The trail of the Jedi’s investigation led
them to Sedri Minor, where Ceret has just
vanished without a trace….

The Ataraxia has landed on Sedri Minor, and onboard, Terec is having a fit, ranting about a growing darkness that must be nourished. Avar Kriss tries to restrain the Kotabi, whose behaviour is influenced by whatever is happening to their missing bond-twin Ceret. Avar tells Terec to calm down, but, frothing at the mouth, he says that the Jedi have already lost. Jedi Master Sskeer is no help: standing guard at the bottom of the boarding ramp, his former apprentice Keeve Trennis thinks that the Trandoshan is getting worse by the minute. Sskeer snaps that Terec is losing their mind, but Avar retorts that he butchered an enemy in cold blood and lost Ceret within minutes of planetfall. In response, Sskeer shouts that it isn’t as though Avar has never made a mistake, and that the situation isn’t about him but about uncovering whatever is happening on this planet.

Keeve thinks that things aren’t supposed to be like this, as standing guard while her old master loses his mind is not what she thought she would be doing as a Jedi Knight. She’s approached by two children, who offer a basket of fresh bucco bread. Keeve is grateful, but tells them they don’t need to give up their own food as the Jedi have food of their own. However, the children aren’t the only ones with the idea: a Rodian couple approaches with a samana spiced loaf. Keeve learns that their son Julus went missing just before they arrived, and that including Ceret a total of five people have gone missing. As well, the colony’s Vratixian barley is rotting in the fields, but no one has done anything.

Keeve asks why they didn’t contact Starlight Beacon for help, and the man says they can’t. She asks if it has anything to do with the Hutts, but an approaching Kalo Sulman asks what they have to do with any of this. After Sulman is introduced as the spokesman of the “honest, law-abiding” community, Keeve explains the discovery of a Hutt Clan starship attacked by the Nihil, and that it was carrying a load of grain from this colony. However, Sulman insists that the other residents are “fantasists” and that they will deal with anything going on by themselves. Shooing away the others, he insists that the residents of Sedri Minor don’t need Jedi food or “rumor-mongering” as Keeve says its fine. But to herself, she thinks that the people’s fear is obvious, even that of the bullying Sulman. Since the Masters are occupied, she decides to investigate by herself.

Heading into the barley field with her lightsaber ignited, Keeve finds that the colonists weren’t kidding about the rotting crops, which emit a foul stench. She is surprised by a boy named Bartol, who is impressed by her weapon as she tries to get him to leave. Bartol, however, decides he wants to help find Keeve’s friend and heads deeper in, forcing her to follow as she wonders why she keeps attracting strays. Keeve senses a “shadow” of some kind, and as the child questions her about how she can do that, the two come across a large sinkhole. Asked if this is a regular occurrence, Bartol wonders what’s down there and jumps in, forcing Keeve to catch him with the Force before following him in. At the bottom, Keeve senses something that knows they are coming.

On the Ataraxia, Terec has passed out. Avar grills Sskeer over why he didn’t sense that the dark side is the cause of the twin’s condition, and he starts to apologize. The conversation is interrupted by contact from Estala Maru, but Avar reminds Sskeer that the conversation is far from over. Maru notes that he has received the corpse of the Hutt recovered from the freighter. As two Jedi begin an autopsy, Maru tells Avar that Grand Master Lahru was perturbed about the request. Avar is perturbed that Maru informed the Jedi High Council, but not very surprised, and tells Maru that she will contact Lahru herself later, as she has a situation of her own.

Sulman, who has arrived at the cruiser, is told by Sskeer that he shouldn’t be here. The Speaker retorts that it is the Jedi who have no right to be on “his” planet, and demands to know the whereabouts of the girl who had been guarding the ship. Sskeer states that the Jedi are attempting to protect Sulman’s people, but the Artiodac is having none of it, sniping that they appear to be losing their own instead. Avar suggests that she and Sulman go looking for Keeve together, and asks Sskeer to stay behind and watch Terec. He says he won’t fail her again.

Lair of the Drengir

Underground, Keeve recites the Guardian’s Mantra as she and Bartol venture through a tunnel. When she stumbles, the boy asks her if she’s okay, and she responds that the darkness is overwhelming. He wonders if she’s afraid of the dark, and she gives a basic explanation about the light and the dark, and that the Jedi belong to the light, before she hears a voice in her head claiming that she will be consumed. Bartol decides to run ahead and search for her, pushing past a wall of roots as Keeve tries to pull herself together. He screams, and Keeve shouts that she’s coming before cutting her way though the wall. On the other side, she and Bartol find Ceret and a Rodian child, trussed up in roots, and Bartol wonders what’s happened to them. Keeve moves to free the two, reaching out with the Force.

Unfortunately, Julus is already dead. Keeve comforts a crying Bartol, telling him it’s okay to be upset. She asks him to hold her lightsaber while she checks on Ceret, who appears to still be alive. After Keeve pulls something out of Ceret’s ear, wondering what they are, the first thing the Kotabi says upon awakening is to “Beware.” Something pulls at Bartol’s leg, knocking him over, but Keeve is quick with telekinesis to use the lightsaber, which Bartol let go of, to sever the thing grabbing the child. As she tells him to get behind her and that he will be safe, words come out of Ceret’s mouth that “No meat will be safe… not from the Drengir!” One of the plant-like beings advances down the tunnel, still chanting for meat.

On board the Ataraxia, Terec, awake again, senses that the darkness has them now. Sskeer attempts to help re-center the Kotabi, but is thrown back as Terec screams, vomiting a black cloud. As Sskeer wonders why he could not help, Terec stands, and an alien voice issues from their mouth, inviting the Trandoshan to “Come with us…”

Underground, a possessed Ceret finishes the sentence, “…We can make you whole,” while grabbing a terrified Bartol, prompting Keeve to shout in exasperation since she already had more than enough to handle. The Drengir states that Keeve’s only choices are to nourish them or become one with them, and she goes for “never”–but the Drengir declares “Food it is” as its tentacles close around her. Fortunately, help arrives as a green lightsaber cuts through the roof of the tunnel. Avar drops through and cuts the Drengir in half, stating that she did hear Keeve’s shouts. Keeve explains that something is very wrong with Ceret, and Avar manages to get him to release Bartol and come back to the light. Unsettled, Ceret explains that the Drengir were too powerful while Keeve reassures Bartol that they will escape. But the two halves of the Drengir reform into two separate individuals, who both chant that there is no escape. They are joined by Sskeer, afflicted by the same condition as Terec and sporting a wooden arm, who chants that the harvest will be bountiful and pure…