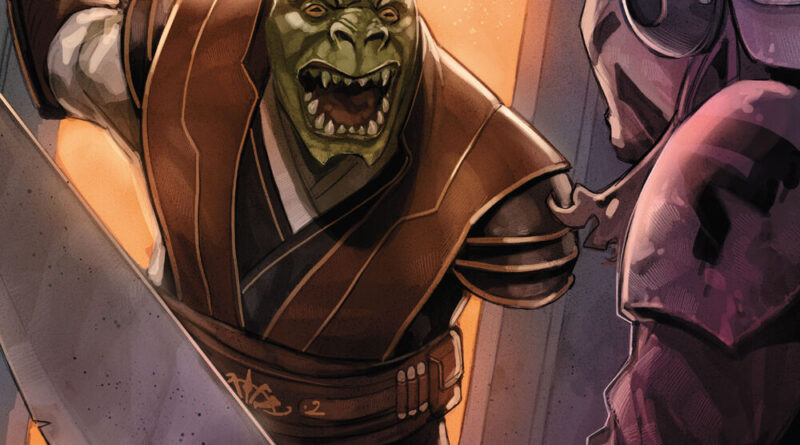 THE HIGH REPUBLIC
THERE IS NO FEAR
Chapter II
“Tomb in Space”
The galaxy is at peace, ruled by the glorious
REPUBLIC and protected by the noble and wise
JEDI KNIGHTS.

As a symbol of all that is good, the Jedi
launch STARLIGHT BEACON into the far reaches of the
Outer Rim. This new space station will serve as a
ray of hope for the galaxy.

Young Keeve Trennis triumphantly passed her trials
and is now a Jedi Knight. But her master, Sskeer, is
deeply troubled. Something is very wrong….

Newly-minted Jedi Knight Keeve Trennis flies a T-1 shuttle through hyperspace, thinking about how nerve-wracking she finds it to be going on her first mission at her new rank, where people will be expecting great things. She is accompanied by her former Master, Sskeer, and the Kotabi bond-twins Terec and Ceret, who are highly reputed within the Jedi Order and are sparring in the back.

When the shuttle arrives at its destination in the Kazlin system, its passengers are shocked to see a destroyed starship surrounded by bodies. Starlight Beacon had picked up a scrambled distress signal and the Jedi had left as quickly as they could, but they are too late, it seems. But Keeve and Ceret sense what appears to be survivors onboard, and part of the ship is still pressurized. Bringing the shuttle alongside, Keeve asks Terec to activate the docking tube, but is corrected that she’s speaking to Ceret. Keeve is embarrassed, but as they board, the twins take it in stride, admitting they are difficult to tell apart.

The inside of the ship is filled with gas, and Sskeer orders everyone to put on their rebreathers. The twins do not need to tell Keeve what that means: a Nihil attack. Keeve has never faced the pirates, but Sskeer did at the Battle of Kur, where he lost his arm. Sskeer orders Keeve and Ceret to find the flight deck while he and Terec explore the rest of the ship, sending them off with a warning to stay alert. Keeve, responding, thinks to herself that she has to get better at saying “May the Force be with you”.

Terec tells Sskeer that the twins have read about the Nihil, and their methods of utilizing poison gas and slaughtering prisoners. Involuntarily, Sskeer thinks back to the Battle of Kur, and Ceret tells Keeve the twins can feel Sskeer undergoing severe trauma. Keeve asks Sskeer if everything is all right, and he insists it is, telling her to concentrate on the mission and inquiring as to whether she’s found the flight deck, which she has. But the smoke is thicker than ever, so she begins to push it back with the Force, puzzled at why Sskeer feels the need to remind her to do that. The smoke clears to reveal the corpse of a Hutt and its guards, so Keeve can certainly tell her Master that she has, indeed, found something.

Sskeer is surprised to hear about Hutts in Galactic Republic space, but Terec points out this sector has only been aligned for a few months. Asked for the cause of death, Keeve notes the stab wounds and blaster marks which pepper the body, and Ceret chips in that the corpse shows the first signs of nagnol poisoning, a gas which can disable sensors and is fatal to even Hutts in large quantities. Keeve asks if there are any survivors on Sskeer’s end, but he hasn’t found any. What he does find, however, is some kind of barley, mystifying Keeve as Hutts are not exactly known for transporting grain. Sskeer points out that even the Hutts need to eat, but Ceret speculates that they were going to sell the harvest to the highest bidder, since many worlds are still suffering from the effects of the Great Hyperspace Disaster.

The twins are discussing the possibility of ascertaining where the ship came from when Sskeer and Terec are suddenly attacked by a storm of flechettes fired from inside the smoke. Terec is injured, something which affects both twins, but they will live. Sskeer, growling to himself that he should have known of the attacker’s presence, removes his mask and uses his nose to locate them. Keeve says she and Ceret are on their way, but so is Sskeer, heading out to hunt the attacker the old-fashioned way. The attacker has dropped their blaster and is leaving behind pools of blood, so he presumes they haven’t got long, but he still can’t sense them. Above him, a tattooed Nihil with a large sword leaps at the Trandoshan Jedi… and Sskeer cuts the pirate in half, screaming “WHY?”

Staring at the Nihil’s corpse, Sskeer continues in his peculiar rage, slashing at the body with his lightsaber while shouting “NO!” Keeve arrives in time to see the tail end of her Master’s fit, which shocks her, but Sskeer claims there was no way to disarm the pirate while sweeping past her. When the team contacts Starlight, Marshal Avar Kriss confirms that there were no survivors, before reprimanding Sskeer for demonizing their enemies, as the Nihil are still living beings no matter what crimes they have committed. Sskeer promises to meditate on the matter.

Master Estala Maru, having analyzed the data provided by Terec, reports that the grain is indeed a kind of barley: Vratixia renanicus, or Vratixian barley, a component of bacta first cultivated on Thyferra. Keeve suggests that Terec could do with some of it. Since no shipments have been reported stolen, Maru posits the barley must have been purchased legitimately, but from where? Ceret, analyzing a damaged navidroid, reports that the ship was travelling from the Sedri system when it was attacked. As Maru explains, it’s a small system in the Periphery with two habitable planets, one of which, Sedri Minor, is arable. A colony was founded there twelve years before, but there has been little contact with it.

Avar decides the colony is overdue for a visit, ordering Sskeer and Ceret to take the T-1 to Sedri Minor while she and Vernestra Rwoh will take the Ataraxia to recover the Hutt ship. She knows Supreme Chancellor Lina Soh will want to know about the Hutt Clans violating Republic sanctions by trading in their space. Keeve offers to go with Sskeer, but he orders her to stay with Terec aboard the Hutt ship, even though Terec claims not to require assistance. Sskeer insists the matter is decided and the Force will be with them. Keeve hopes so, because she knows that nothing about the situation is right.

On Sedri Minor, the T-1 shuttle is met by a few children who are awed to see Jedi, as well as a farmer named Kalo Sulman who is less welcoming, telling Sskeer and Ceret they are not welcome because this is an independent colony. While Sskeer asks Sulman about the colony’s crops, Ceret sees a Rodian deep within the barley field making a beckoning gesture. Unnoticed, the Kotabi Jedi heads amongst the crops, calling out for whoever is there and asking if they require assistance. A tentacle, or perhaps a vine, rises behind Ceret as the Jedi reiterates that “We are here to help.”

Tremors in the Force

Aboard the derelict Hutt vessel, Avar inspects the body of the Nihil and asks if anyone else has seen it. Keeve explains that the Marshal is the first, as the twins were injured and she didn’t know what to do. Avar says that Keeve should have told her right away, as she would have stopped Sskeer from going to Sedri, and Keeve apologizes, explaining that she had never seen Sskeer like that before, filled with rage. But Avar says that she is the one who’s sorry, as Sskeer hasn’t been the same since Kur, and that she should have listened to the song of the Force and realized something was wrong. The conversation is interrupted by a scream.

Avar and Keeve find an agonized Terec being held by Vernestra Rwoh, who explains that she doesn’t know what happened as he just cried out. Terec, asked about the injuries, explains to Avar that something terrible has happened to Ceret. Avar immediately contacts Sskeer over her comlink, asking if Ceret is with him. Only then does Sskeer realize the Kotabi is gone, and runs into the barley field as Sulman yells for him to wait. Sskeer calls Ceret’s name, but the only thing he finds is the Kotabi’s lightsaber sticking out of a pile of dirt. “Sseret— where are you?”

SWRPGGM · 1 week ago
@swrpggm
We are back at it again for ANDOR with development of our newest Source Guide for the series. The ANDOR Source Guide