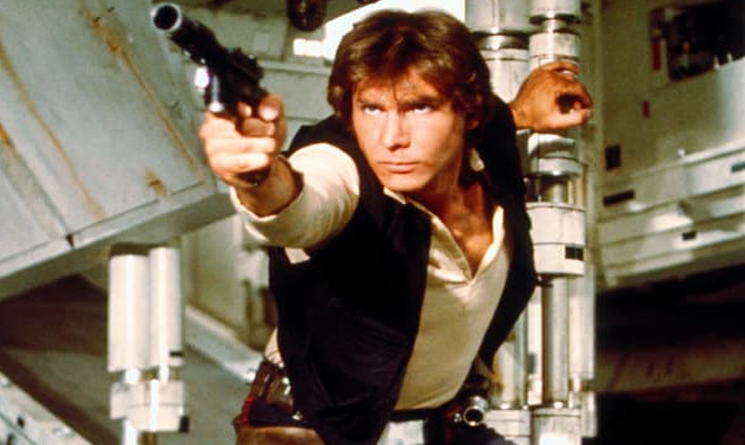 Background: Han Solo, known only as Han until being given the surname Solo by an Imperial recruitment officer, and formerly known as Cadet 124-329 while serving as an Imperial cadet, was a human male smuggler. He became a leader in the Alliance to Restore the Republic and an instrumental figure in the defeat of the Galactic Empire during the Galactic Civil War. He hailed from Corellia and became a smuggler, even completing the Kessel Run in just twelve parsecs with his prized ship, the Millennium Falcon, and coming under the employ of Jabba the Hutt. He was the son-in-law of fallen Jedi Knight Anakin Skywalker and Senator Padmé Amidala, husband of Princess Leia Organa, brother-in-law of Jedi Master Luke Skywalker, father of Ben Solo, rivals and close friends with fellow smuggler Lando Calrissian, and best friends with the Wookiee Chewbacca, his trusted copilot who swore a life debt to the Corellian smuggler. Solo ran afoul of Jabba after ditching a shipment of spice to avoid trouble with the Empire, owing the Hutt a great deal of money as a result. His fortune seemed to have changed when he agreed to charter Luke Skywalker, Obi-Wan Kenobi, and the droids R2-D2 and C-3PO to Alderaan, but he became caught up in the rebellion against the Empire and, after helping Princess Leia Organa escape from the Death Star, briefly fought in the Battle of Yavin, which allowed Skywalker to destroy the superweapon. Solo fought with the Rebellion for a number of years afterward, taking part in numerous operations and battles against the Empire.

After the Battle of Hoth, Solo sought refuge with Organa—with whom he had fallen in love—Chewbacca, and C-3PO on Cloud City, which was operated by his old friend Lando Calrissian. There, they were captured by the Sith Lord Darth Vader as part of a trap to bait Skywalker to the city. Solo was frozen in carbonite and taken to Jabba’s Palace on Tatooine by the bounty hunter Boba Fett, where he remained encased in carbonite for months until he was rescued by his friends. After returning to the Alliance Fleet, Solo was promoted to the rank of general and was given command of the Pathfinders, a special forces squad, for the Battle of Endor. Solo led the Pathfinders to Endor, where he, Organa, Chewbacca, and the special forces team, with the help of the native Ewoks, destroyed the shield generator protecting the second Death Star that was being constructed in orbit. Their actions allowed the Alliance Fleet to destroy the superweapon.

The Battle of Endor, which saw the deaths of Emperor Sheev Palpatine and Darth Vader, allowed the Rebellion to form the New Republic. In the early days after Endor, Solo continued to lead the Pathfinders against the Empire. He married Organa, and the two had a son, Ben Solo. The boy struggled with the dark side of the Force—like his mother, who was the daughter of Darth Vader and twin sister of Luke Skywalker, Ben was Force-sensitive—so Organa sent him to be trained as a Jedi by Skywalker. He was seduced to the dark side by Snoke, Supreme Leader of the First Order, resulting in the destruction of Skywalker’s attempt to rebuild the Jedi Order.

Having lost their son, Solo left and returned to smuggling, and even lost the Millennium Falcon to numerous thieves. He continued to smuggle until he was brought back into the fight by a scavenger named Rey and a defected First Order stormtrooper named Finn, who carried with them a droid, BB-8, that had part of a map to Skywalker’s location. Solo, who retrieved the Falcon from Rey and Finn, returned to Organa, who led the Resistance against the First Order, and fought in the battle to destroy the First Order superweapon known as Starkiller Base. During the battle, Solo saw his son, who had taken the name Kylo Ren, and tried to convince him to return home. Instead, Ren stabbed his father with his lightsaber. Mortally wounded, Solo fell to his death in the bowels of the Starkiller weapon. However, Solo’s memory remained alive and appeared in a Force vision a year later to convince Ren to abandon the dark side and defeat the resurrected Emperor Palpatine, after a duel on the remains of the second Death Star between Rey and Ren, being enough for Ben Solo to return and eventually sacrifice his own life to rescue Rey.