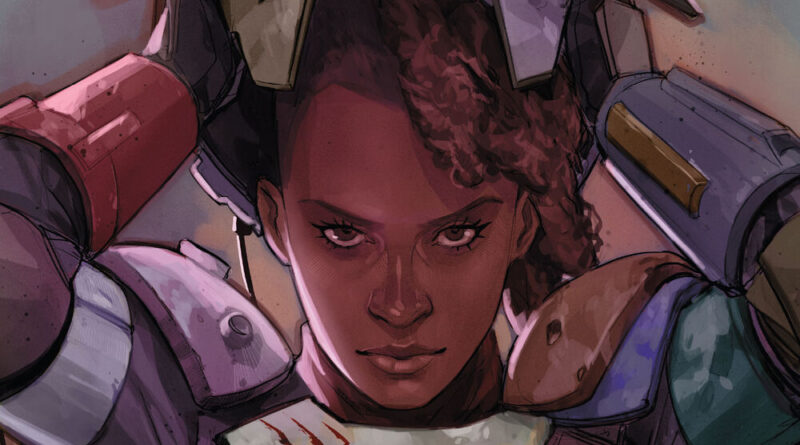 THE HIGH REPUBLIC
THE SHADOW OF THE NIHIL
CHAPTER I: Jedi No More
The Nihil have struck! The Republic Fair on Valo,
intended to be a celebration of unity and progress,
has been razed to the ground. Thousands are dead.

While the attack was underway, Marshal Avar Kriss
was leading the charge against the insidious
Drengir on Mulita, but the Drengir blight was a feint
to keep the Jedi of Starlight Beacon from rushing to
Valo’s aid.

Now, months later, the Jedi have been charged
with chasing down the Nihil wherever they run. The
response is being masterminded by Jedi Council
Member Stellan Gios, but passions are running
high, even among the Order’s finest. The Nihil are
on the run, but they are not yet defeated….

Jedi Wayseeker Orla Jareni follows her own path, unaligned with any temple or outpost, only following the will of the Force. Currently, the Force has led her to throw in her lot with the Jedi of Starlight Beacon, led by Avar Kriss, who are leading a crusade against the Nihil pirates. Keeve Trennis thinks to herself that she needs to get the terminology right: not a crusade, a response. Keeve wonders if she will ever have such purity of vision to trust so completely in the Force — or herself. Onboard her starship Lightseeker, Orla reports to Estala Maru that she has finished her sweep of the Soola system, with no Nihil activity to report. Just then, however, the ship’s Targes scanner goes off, and Orla reports the incoming incursion from hyperspace, saying she thinks she’s about to have company. Keeve thinks that Orla is an inspiration, and she could have learned so much from her if only they had the time. A Nihil Stormship emerges into realspace, and Orla reports that Nihil activity is confirmed, telling Maru that the single ship is armed like an entire fleet. Maru asks Orla to send her position, but as she tries to do so, enemy fire knocks out her communications. Onboard the ship, a Nihil gunner states that the Jedi craft is helpless, turning to the ship’s commander for orders: Storm Keeve Trennis. She tells Terec she thought that would be obvious, telling them to do what they came for and blow her out of the stars.

On the Starlight Beacon, before any of that happened, Marshal Avar Kriss chairs a meeting about the fight against the Nihil, stating reports are coming in of another major victory. Jedi High Council member Stellan Gios, attending by hologram, reports that, since the attack on Valo, the Unified Republic Task Force has tackled Nihil marauders on Aris, Port Haven, and Golrath, and the pirates are running scared. Sskeer comments that it’s only to be expected of cowards. Keeve Trennis tells him off, but he responds that sometimes you have to say it like it is, before asking about the Nihil leadership. Maru states that the Twi’lek Lourna Dee, believed to be the Eye of the Nihil, was apparently killed during the Battle of Galov, and they think this is why the Nihil are scattering as their forces are in disarray. Avar asks about the rumours that a new Eye has taken her place, and Stellan says there are unsubstantiated reports of a number of possible candidates, including a Talpini seen on Ashas Rine by Togruta intelligence and a masked individual seen in various garbled transmissions intercepted by the Leresai Assembly.

Stellan continues that they have no evidence that either of these individuals is the new Eye. Avar asks what would happen if they could prove that evidence, and Stellan asks her if she has something to share. The Marshal states that Starlight’s Chief of Security has intercepted intel that the Nihil are massing in the Soola system, and Ghal Tarpfen adds that the name was mentioned in various comms her team decoded. Stellan states the task force has already swept that area several times, and Avar retorts if it was the same way they swept Valo before the Republic Fair, where hundreds were killed. Avar says the Nihil have already played them for fools before, and they cannot be allowed to do so again. As the two Jedi Masters argue, Kotabi bond-twins Terec and Ceret watch, one of them commenting that things are not going well. Stellan insists that they won’t, but Avar says she wants to send a team to Zallo to follow up on Chief Tarpfen’s lead. The Council Member refuses the request as Avar protests, the whole argument being watched by Keeve with narrowed eyes as Stellan says “Not at this time.”

Keeve stands up and interrupts, telling Stellan that, with all due respect, Avar is right. She reminds the room that there is evidence from Valo and Mulita that the Nihil helped seed the Drengir along the Galactic Frontier, causing thousands of deaths, just so Starlight would be kept busy and unable to respond to the crisis on Valo. Stellan says they don’t know that for sure, but Keeve responds that they need to teach the pirates that Starlight isn’t just there for amusement and they need to act. In response, Stellan says that they all will, but as part of the unified response instead of running off to assuage their guilt. After he signs off, telling them to stand by for further instructions, Keeve is surprised by the “guilt” accusation, Avar tells Keeve she appreciates her speaking up, but clashing with High Council members won’t help their cause. Keeve disagrees, asking if Stellan and all the Jedi are wrong and they ned to be doing more. Sskeer tries to talk to her, but Keeve storms off, apologizing but saying that after everything they went through, there has to be a different way.

In the present, in the Soola system, the Lightseeker fights the Stormship. Keeve asks Terec if they think Orla got a distress signal out, but they say there’s no way to tell. However, the Jedi cruiser Ataraxia arrives, ordering the Stormship to stand down and surrender. Keeve says it’s time for a distress call of their own, contacting Nihil command to report that the Ransacker is under attack by Jedi and requires immediate assistance. Terec says there won’t be time, as the Ataraxia has launched multiple Jedi Vectors: Gold Drift, commanded by Sskeer, who orders his pilots to target their engines, stating that the Force is with them all as the starfighters begin their attack. On the bridge of the Ataraxia, Avar is concerned about whether the Trandoshan should be leading the Drift, as he’s still recovering, but he insists he needs to make amends, saying it’s the only way he knows. Nooranbakarakana reports multiple readings from the scanners, and Avar says she can hear their song in the Force, ordering all Vectors to prepare for incoming.

Told that the Nihil have answered her call, Keeve says that they just have to avoid getting scrapped before they can escape, although their engines are damaged and shielding is nonexistent. Keeve targets a Vector and shoots it down as Sskeer watches, responding to being told it’s a direct hit by saying that she knows. The Ransacker is grabbed by magclamps, to Keeve and Terec’s concern, but it is not the Ataraxia but the Nihil, and the pirates jump into hyperspace. Nooranbakarakana reports that the pirates have gone, and Avar asks the Vectors to report in. Once Nib Assek, Burryaga Agaburry, and Coll have done so, Avar speaks to Sskeer, who says he is still with her and asks if they think the pirates bought it. Avar says they’ll discuss it once he’s safely back on board, but Sskeer asks about Keeve and Terec. The Marshal says that the two Jedi Knights are on their own, hoping that the Force will protect them.

Keeve thinks to herself that that’s that: she and Terec are fugitives now. She never wanted to fire on a Vector, even if Ceret was remote controlling it from the Ataraxia. But they had to make the Nihil believe that they are who they say they are, that their Stormship wasn’t salvaged from the Nihil base on Grizal, that the distress call was real. Back on Starlight, Keeve apologizes to Sskeer for losing her temper, saying that lesson number one is that there is no passion. Sskeer says that there is always passion, but how they control it is what matters. He adds that Avar wants to speak with her about an idea she had. And so Keeve and Terec are no longer Jedi, but Nihil through and through.

When the starships land, Keeve departs the Ransacker, saying it took the “kriffers” long enough to show up. She and Terec are met by a Crolute who asks which Tempest they’re from. When Keeve was being briefed for the mission, Maru told her about the Nihil’s structure, and told her that when she was asked, to say she was from Pan Eyta’s Tempest, as Eyta was believed killed in the skirmish over Cyclor and his Tempest went to ground. So that is the answer she gives, and the Crolute says that Eyta was one of their best — before attacking Keeve with an electrified whip and asking if she is. Keeve remembers Avar telling her that she would be tested, and she needed to respond not as a Jedi, but as a Nihil, because it is the only way to gain their trust. So she grabs the whip and knocks the Crolute down, getting him into a chokehold and asking him if that answers his question. Her martial skill leads the Tempest Runner Zeetar to say he believes her cover story, and he orders Keeve to let the Crolute go.

Zeetar presumes that Keeve knows who she is, although not by name. The Crolute, however, mentions the Tempest Runner’s name when reporting where Keeve was found, scrapping with “Jays” out near Soola. Keeve claims that’s all she’s been doing for months, saying the Jedi have been running them ragged and she doesn’t know what the Eye is playing at. Zeetar says it’s a good question, one he might answer when he’s sure. Keeve asks what he means, and he says he wants to know if she is truly Nihil. Handing her a warhammer, he says she’ll need it to prove herself. Ordering a prisoner to be brought in, Zeetar says that if Keeve is really who she says she is, she’ll do as she’s told. Keeve is surprised to learn that the prisoner is Myarga the Hutt, as Zeetar orders her to split the prisoner’s skull in two to prove her identity, and hopes that Avar can’t have meant this when she said Keeve would have to abandon everything it meant to be a Jedi…