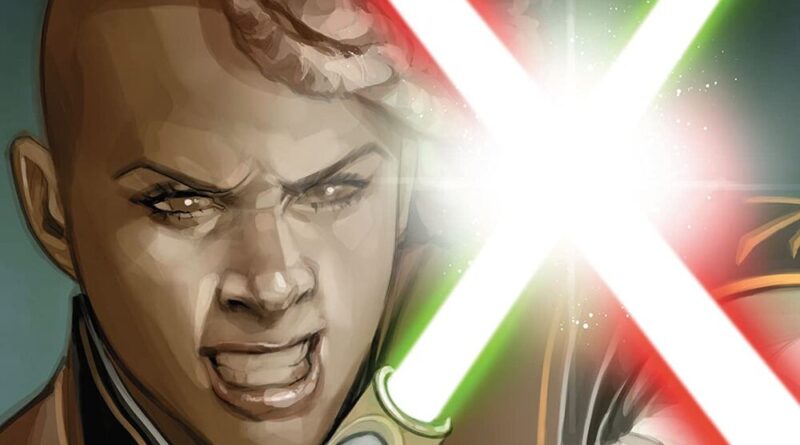 THE HIGH REPUBLIC
HEART OF THE DRENGIR
CHAPTER II: Of Sith and Shadows
The sinister DRENGIR devour all in their path.

Jedi Master Avar Kriss forms an uneasy
alliance with the treacherous HUTT CARTEL.
Together they will strike at the Drengir’s
home planet deep in Wild Space.

As Master Estala Maru of Starlight Beacon
gathers Jedi to help, young Knight Keeve
Trennis deals with the consequences of her
triumph over the Drengir….

Keeve Trennis does not know where she is. The Jedi Knight finds herself alone in a rocky, vine-strewn wilderness, calling out for Sskeer or Avar Kriss or anyone else she knows. But all that answers her is a dark voice, saying that she will only ever be no one. Keeve ignites her lightsaber, but is met by Kanrii the Ximpi, and she asks him what he’s doing here. Bartol appears and explains that they do not know, and when Keeve expresses surprise that he’s here, he asks her where “here” is, but Keeve does not know. A Rodian probes an object and suggests it will tell them, and Kanrii agrees that Julus will know. Keeve points out that Julus can’t be here because he was killed by the Drengir. Julus dismisses it as “details” before activating a hologram of the Amaxine space station, which Keeve recognizes even though she cannot remember the name.

A woman cloaked in white appears and says it’s on the tip of Keeve’s tongue. Keeve does not know her, but the woman asks her what she is waiting for before vanishing. Cursing, Keeve finds herself alone again and demands to know what is going on, asking where the others have gone. An ominous figure rises behind Keeve and says the others were never here, “but I… am.” Igniting a red lightsaber, the figure engages Keeve in a lightsaber duel as she panics that this cannot be happening. The dark side warrior asks the “seed-pawn” if she thought she could defeat them, but Keeve has no idea what her opponent is talking about. When the enemy demands to know if she thought she could consume them, Keeve throws them back and says that the harvest will be protected, in a voice that is not her own. As Keeve wonders what she just said, the darksider says that the harvest will be his before running her through.

Finding herself paralyzed, Keeve askes herself why she can’t move, and the “spooky ghost lady” reappears to ask her what she thinks and what is truly stopping her, or who. Keeve hears that the circle is complete, and she sees four golden figures looming as the dark side warrior declares that the circle shall be forever, amidst many Drengir. She screams in defiance, and finds herself in the Starlight Beacon’s Meditation Chamber, being paged by Doctor Gino’le. The doctor tells Keeve that, according to the sensors Marshal Kriss had him fit to Keeve’s wrist guards, her vitals just jumped off the scale. Keeve says she was meditating, and Gino’le retorts that he would assume that should have the opposite effects. Thanking him for checking in on her, Keeve assures him that she’s fine, but as she sees a Drengir reflected in the wall, Gino’le asks her if she’s sure. Cracking the wall, Keeve insists that she is and signs out over Gino’le’s protest that maybe she should come to the med centre.

Running through the halls, Keeve thinks that Gino’le means well, but has no idea what is truly wrong with her, as she does not even know herself. She thought she was so clever, tapping into the Drengir Root Mind to find the Great Progenitor, but telepathy goes both ways, and now she is stuck on Starlight. Keeve runs into KC-78, Jedi Master Estala Maru’s astromech droid, and asks what has gotten into the droid. When she says she needs to see Maru, KC beeps that he is busy, and Keeve retorts that of course he is, because he is always busy, and she needs to be busy as well. Maru is communicating with Avar, telling her that he sent calls out to every Jedi meeting her criteria, but many of them are already occupied. This displeases Avar, who points out that she is talking about the Drengir, and that if they want to contain the threat, she will need as many Jedi as possible in Wild Space. Maru reiterates that he is trying to find them, but there are other concerns beyond the Drengir, such as the Nihil and the upcoming Republic Fair. At the mention of the Fair, Avar rolls her eyes and suggests that Maru has been talking to Stellan Gios, which he admits he has. Signing off, Avar says that her forces are closing in on the Mulita system and she needs those Jedi now, Maru promising to do his best.

Keeve approaches Maru, who says that his time is limited at the moment, and she responds that she knows because KC told her. He notes she heard the Marshal, and Keeve says she wants to help and can make a difference. Remembering how she found the Great Progenitor, Maru says he wants to believe Keeve, but asks if she believes herself. As Keeve struggles to answer, Administrator Velko Jahen hands Maru a datapad with a category three report from the Rseik sector. Turning to Keeve, Maru notes that she wanted to make a difference, and the Force has presented an opportunity, handing her the datapad while stating that the question is about whether she can get the job done.

In Agricultural Hub 42 on Chortose, brothers Pango and Gru try to call Starlight for help, as Nihil attackers are at the front gates. Gru suggests that they give up, as the pirates are already inside, and that since the Jedi are not coming, they will have to defend the factory themselves as bombs deploy the Nihil’s weaponized gas. He raises a blaster, but the Storm in command mocks their efforts while approaching. The Storm orders Puw to just kill them and be done with it, as their interest is in the sprayer droids. One of the brothers asks why, but the Storm says it is none of the Chortose’s concern as their weapon is raised.

Appearing out of the gas, Keeve ignites her lightsaber and says she is interested. The Storm coolly notes a Jedi did come, and when Keeve says she wouldn’t miss this for anything, the pirate commands the other Nihil to light things up, and they open fire. As she deflects the fire, Keeve quips about the Storm’s use of a Huttese swear word, since she can’t stand “bad kriffing language.” As one of the pirates is hit, Keeve turns to the Chortose and says they need to get out of there. Pango says that Gru is injured, and Keeve tells him to get them out while she deals with the Nihil clown. In her distraction, however, the Storm gets the drop on her and hits her in the head, while asking how she is going to do that. As the Nihil seize the two Chortose, who call for help, the Storm gloats that Jedi were supposed to be impressive. To Keeve’s horror, the pirate transforms into the Sith Lord from her vision, while saying they thought Jedi were hard to kill.

The Storm is suddenly struck by a flying sprayer droid, and a Devlikk pirate asks if they are okay. Another Jedi ignites her lightsaber and suggests that the pirates release the Chortose. Getting up, Keeve moves to thank her rescuer, but the woman says she should thank the Force instead. Keeve recognizes the new arrival as the woman in white from her visions, who introduces herself as Orla Jareni and asks who Keeve is. After she introduces herself, Keeve asks about the rest of the Nihil, but Orla explains they’re already in binders, and a signal has been sent to the Republic Defense Coalition to pick them up. Keeve suggests she followed the distress call, and Orla agrees, in a manner of speaking. When Keeve retorts that she is not in the mood for riddles, Orla agrees, moving to the environmental controls to clear the air before they choke to death.

Keeve asks Orla which temple she belongs to, but Orla responds that the thing about Wayseekers like her is that they go where the Force leads them, which is how she came. However, it was not to stop the Nihil, but, she says, to find a Jedi in danger of losing herself. Keeve claims she doesn’t know what Orla is talking about, but the Umbaran believes she does. Orla receives a broadcast from Avar, who is ordering all available Jedi to report to a set of coordinates in Wild Space. She notes that in the face of direct orders from the Marshal of Starlight, Keeve is running in the opposite direction. Keeve says she could say the same about Orla, but Orla responds that the difference is that she can sense Keeve belongs with those Jedi. When Keeve says she is not needed, Orla asks if they told her that, but Keeve begins to cry.

She snaps at Orla that the others didn’t need to tell her, not when she thought she could embrace the darkness and survive, but now sees it everywhere. She says she never should have been knighted. Orla points out that Keeve’s Master must have thought she was ready, but Keeve responds that her Master nearly fell to the darkness himself for all of his experience, and she can’t even handle a pirate with a vibro-ax. Keeve says she stayed behind because she would have gotten the others killed, and Orla asks how she would have made things worse. Suddenly, Keeve yells and grabs her head, saying the Drengir root-mind spoke to her. Orla asks what it says, and Keeve responds that it said it is over and they have already lost, beholding a vision of a skeletal Avar Kriss consumed by Drengir vines.

SWRPGGM · 4 hours ago
@swrpggm
Hey @DisneyPlus why are you preventing me from using your service unless I provide detailed personal information that I have no desire to share with you. This makes me want to #unsubcribe
View on Twitter
0
0

SWRPGGM · 9 hours ago
@swrpggm
Episode titles for #TheBadBatch were released today with the trailer. https://t.co/5sLFypPdTj
View on Twitter