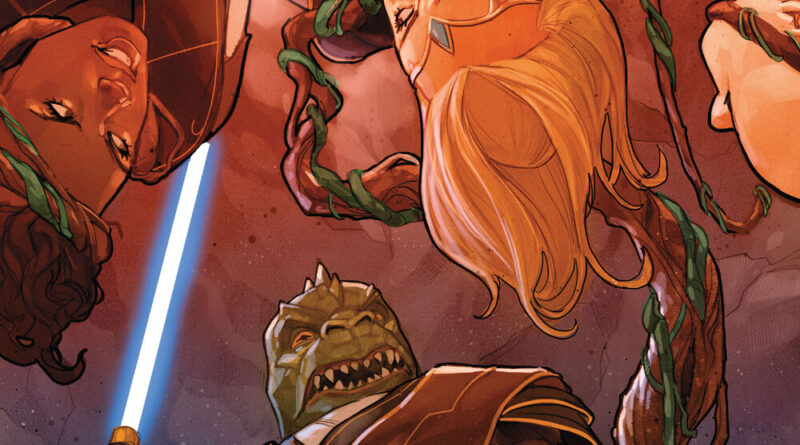 THE HIGH REPUBLIC
THERE IS NO FEAR
CHAPTER IV: Song of the Drengir
A derelict Hutt ship. A Nihil incursion.
Missing colonists. The Starlight Jedi’s hunt
for answers leads them into a deadly trap set
by the monstrous DRENGIR.

But the Drengir now controls Jedi Master
Sskeer. The first target for the Drengir’s dark
harvest? His former apprentice, Keeve….

Six years before, on Kirima in the Mid Rim, Padawan Keeve Trennis is uncertain, but her Master, Sskeer, reassures her that she will make it, and she will not fall into the gorge he is asking her to jump across. He tells her to visualize herself landing on her feet on the other side, and that the Force is with her. An older Keeve thinks to herself that Sskeer always believed in her and always knew what to say, even when she did not. She jumps, but fails to reach the other side. Keeve falls, but Sskeer catches her with the Force and pulls her back up, telling her not to apologize. Remembering this day, Keeve thinks that Sskeer was always there to help her, as he suggests that she try again.

Prisoners of the Drengir

In the present, as she, Marshal Avar Kriss, Ceret, and Bartol are prisoners of the Drengir on Sedri Minor, where Sskeer now serves them, Jedi Knight Keeve wonders where it could have gone so wrong. Avar tries to get Sskeer, who insists that the Drengir must feed, to realize what he is saying and how he is violating his oaths as a Jedi. She asks him if this is why he cut himself off from the Force so she couldn’t sense him. The Drengir, deciding Avar talks too much, gag her with a root as the possessed Sskeer insists that she should really listen to the Drengir’s song if she wants to understand them.

Sskeer tells of the Drengir’s past: once, they spread across the galaxy, feasting on meat wherever they could find it, their harvest plentiful. They joined forces with others who saw their power and reaped alongside them, only to eventually betray the Drengir as was their nature. The Drengir made them pay the price, but they found themselves bound by totems which forced them to sleep, including the first of the Drengir, the Great Progenitor. And while she slept, so did the others. But eventually travellers found the Progenitor and woke her from her slumber, along with all of the others.

Onboard the Starlight Beacon, Archivist OrbaLin oversees the autopsy of the dead Hutt, telling Estala Maru how fascinating the specimen is. OrbaLin explains that the Hutt, although severely injured by the Nihil, was not killed by its injuries or nagnol poisoning, but because its entire system was infected. Maru asks how, but OrbaLin assures him that the autopsy team, including Vernestra Rwoh and Imri Cantaros, is following standard quarantine procedures. Imri notes that the whole thing is disgusting, responding to Vernestra telling him it’s not the time by asking how those things got inside the Hutt’s veins. OrbaLin agrees that Imri’s question is all-important, noting that they appear to be part of a root system of some kind. Imri starts to respond when the Hutt’s corpse moves, prompting him to exclaim that it’s alive, although Vernestra thinks it impossible. OrbaLin clarifies that the cadaver is infested, and as Maru demands to know what is going on, Drengir explode out of the corpse. The Archivist responds that Starlight’s quarantine measures are about to be tested to their limits.

In the grip of darkness

On Sedri Minor, Keeve attempts to appeal to Sskeer, complimenting him on his new wooden arm but pointing out that he is not a Drengir. He has a moment of clarity before insisting that the Drengir have made him whole, and Keeve responds that his arm will grow back in time, and that he taught her there were no shortcuts on light’s path, asking him to remember because she still believes in him. Ceret, shaken, insists that it is hopeless as they have seen the reaping: the Drengir always survive and Sskeer is lost, as are they all. Roots force themselves into the prisoners’ noses and mouths as the Drengir demand to feed. Keeve, struggling, pleads with Sskeer, saying that whatever they have promised him, he does not need to do this. Sskeer, sounding more like himself, says that he does need to in order to understand the true nature of the Drengir, and their weaknesses. He pushes up with the Force, and the Drengir holding the prisoners are forced out of the ground, screeching, with Bartol still in their clutches.

Avar approaches Sskeer, who apologizes, saying that he thought he was strong enough but that the Drengir nearly overwhelmed him. Keeve reassures him that he and the Force were stronger, and Sskeer starts to tell her something concerning the weeks since the Battle of Kur. However, Avar interrupts, stating that his confessional will have to wait as the Drengir still have the boy, and the Jedi leap out of the underground cave in pursuit. Sskeer’s vine arm causes him pain as he fights the Drengir, but he dissuades Keeve from removing it, saying that he is part of the Drengir as they are part of him, using this power to immobilize the creature holding Bartol. Keeve attacks the creature, thinking that although taking life is always a last resort for a Jedi, the dark side must always be driven back wherever it is found, and that goes double for those who do its bidding.

Returning to the colony

In the colony, Kalo Sulman takes out his anger on the Rodian couple who spoke to the Jedi earlier, claiming that they must pay the price for allowing the Jedi to stick their noses where he thinks they do not belong. The Speaker’s brutal assault is interrupted by the door of the building being blown in: Avar wants a word with him. He tries to run, claiming he has nothing to say to them, but is intercepted by Keeve and Sskeer.

Sulman is terrified by the sight of the Trandoshan’s vine arm, and Sskeer accuses him of knowing full well that the Drengir had taken root here, throwing him into the ceiling while demanding the truth. Keeve reminds him to remember who he is, noting that the other Jedi are there to help. One of the Rodians asks what Drengir are, and as Avar explains her comlink buzzes with a call from Maru. She asks him if it can wait since they are dealing with a situation, but Maru responds that so are they: Starlight Beacon is under attack, as Maru and Vernestra fight the Drengir that emerged from the Hutt’s corpse.

Keeve, however, has news of her own for Avar: they have company in the form of another starship. A voice from the ship proclaims that it has come to deliver the people of Sedri Minor from “tyranny” in accordance with a pre-existing bargain that Sulman seems to know something about, insisting that he does not know what a Drengir is but that the Jedi are about to get a taste of “real” power. Sskeer tells Keeve to ignite her lightsaber, suggesting that they are expecting a fight. An armored Hutt emerges from the ship, flanked by Gamorrean guards riding rancors, and declares that Sedri Minor is now the property of the Hutt Cartel.