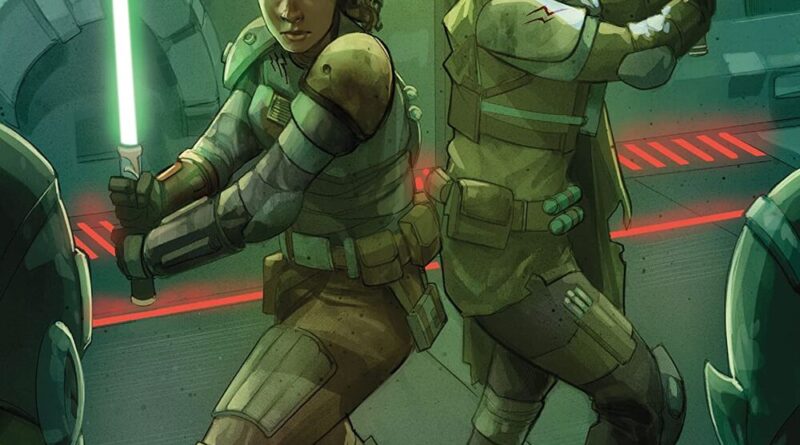 THE HIGH REPUBLIC
THE SHADOW OF THE NIHIL
CHAPTER 2: OUT OF BALANCE, OUT OF TIME
As the hunt for the Eye of the Nihil intensifies,
Jedi Master Avar Kriss goes against the will of the
Council and launches her own mission to find
whoever has taken over leadership from
Lourna Dee.

Keeve Trennis and the Kotabi bond-twin Terec have
been sent undercover, infiltrating a Nihil gas
foundry on Xais in the Outer Rim. Face-to-face with
Tempest Runner Zeetar, Keeve finds herself put to
the test.

To prove she is loyal to the Storm, she must kill one
of the Nihil’s prisoners, the Jedi’s former ally,
Myarga the Hutt….

At the warcloud forge on Xais, the Nihil hold Myarga the Hutt prisoner. Keeve Trennis, a Jedi Knight attempting to infiltrate the pirate group disguised as a Storm, thinks to herself about what Avar Kriss told her to do: act like a Nihil and get their trust. What Avar failed to mention, however, was that it would mean killing a former ally in cold blood. A cynical, untrustworthy, and selfish former ally, but a former ally regardless. Spotting a barrel labelled as containing nagnol, Keeve has an idea and covertly uses telekinesis to knock it over, alarming the Lepi Nihil moving it as the volatile gas detonates, throwing everyone back.

The Lepi, on fire, screams for help, but an angered Tempest Runner Zeetar instead guns the “stupid mange-farmer” to death, shouting that the entire plant could have gone up. Keeve suggests that the Lepi might have done them a favour, asking Zeetar where and when he found the Hutt. Upon receiving confirmation that the capture occurred on the edge of Wild Space and after the attack on Valo, Keeve claims that she heard from a Battrach gunrunner at Port Lennax that the “Jays” who fought the Drengir apparently worked with a Hutt. Suggesting that the Hutt in question might be the prisoner, Keeve says that she might possess any number of Jedi secrets, which they might as well find out. If she doesn’t have any, then no harm done: they just kill her later. As Keeve speaks, Myarga regains consciousness and focuses on her.

Onboard the Ataraxia in hyperspace, Avar Kriss asks Ceret if they can still sense their bond-twin. Ceret responds that they would be worried if they couldn’t, explaining that the twins are, in essence, the same being with the same mind, and experience each other’s thoughts even separated at such a distance. Avar asks the Kotabi what their thoughts tell them now, and Ceret responds that Terec is safe, but also worried. Nooranbakarakana responds that going undercover is always stressful, but Ceret adds that Terec believes Keeve is playing a dangerous game. Unnoticed by the others, Jedi Master Sskeer tests levitating his lightsaber, but the Trandoshan loses his concentration and drops the weapon when Ceret says that Keeve’s game has something to do with Myarga. Avar, concerned, wonders if Myarga is with the Nihil, and Ceret responds that although they are having trouble interpreting, Keeve, Terec, and Myarga all appear to be in danger.

The Marshal states that the Force will protect them through the Jedi on the cruiser, and tells Nooran to follow Ceret’s coordinates. Sskeer’s holoprojector beeps, and he answers to find he is being contacted by Doctor Gino’le from Starlight Beacon. The Anacondan says he is glad he could get through, and Sskeer asks if there’s a problem on the space station. Gino’le responds that he just needed to speak to Sskeer. The Jedi Master responds that now is not a good time, but the doctor responds that it can’t wait since Sskeer is out in the field, saying he might want to take the call alone. Sskeer responds that he keeps no secrets from his fellow Jedi as Avar turns in his direction. Gino’le goes ahead, but says it isn’t good news: having received the results from his tests, the doctor knows why Sskeer is losing his connection to the Force.

On Xais, as the group moves through the Nihil gas foundry, Keeve reassures a worried Terec that it’s all good, and that she’s buying them time by buying Myarga time, asking the twin if their other half is on the way. When Terec confirms it, Keeve asks if they can make it seem like they’re almost here. Overhearing the quiet conversation, Zeetar asks if the two have something to share, and Keeve says she was remarking on the impressiveness of the facility, having never seen such a forge before, and speculates that the Eye must be planning something big. Zeetar tells the “Storm” that’s none of her concern unless she has her sights set on becoming a Tempest Runner. Keeve asks if there are any openings, and Zeetar snaps that they are not at a job fair. As the group enters another room, Keeve and Terec stare as Zeetar says he would like to see what they can do, revealing Myarga in a large tank.

Keeve asks if it’s a bacta tank, and Zeetar responds “Not exactly” as he activates some controls. Green gas seeps inside the tank, and Zeetar tells Keeve and Terec Myarga is all theirs. Keeve asks what the substance is, and Zeetar responds that it’s unrefined nagnol, saying they had better be quick before the Hutt’s lungs burn. Mentally cursing to herself, Keeve addresses Myarga, telling the “slime pod” that she had better talk if she wants to live. Responding in Huttese, a dazed Myarga wonders if Keeve knows who she’s talking to, threatening that she’ll see her interrogator burn in the Pits of Ku’rella before saying anything. Keeve, knowing Myarga is not stupid, hopes that she realizes she wants to help. A Crolute Nihil reports to Zeetar that the tank’s gas valve is jammed, which Keeve realizes is Terec’s doing. Keeve thinks to herself that all they have to do is hold out long enough for their backup to arrive.

Commenting that there’s more than one way to skin a mekle, Zeetar says that Keeve had her chance and blew it. Punching the tank’s controls, Zeetar says they’re going to do things his way: electricity. As Myarga is being shocked, Zeetar demands to know if the Storm is right, asking what she knows of the Jedi. Myarga asks if Zeetar is blind, and if he cannot see what is right in front of him, as Keeve is overcome with dread, hoping that Myarga won’t do it.