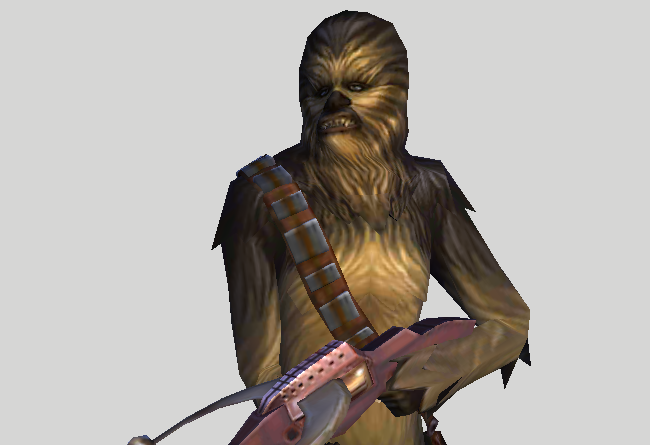 Background: Chewbacca, known affectionately to his friends as Chewie, was a Wookiee male warrior, smuggler, mechanic, pilot, and resistance fighter who fought in the Clone Wars, the Galactic Civil War, the Cold War, and the subsequent First Order-Resistance War. He hailed from the planet Kashyyyk and became a Wookiee military leader. During the Clone Wars, he was captured by Trandoshan slavers and held captive on Wasskah, but he worked with a fellow captive, Jedi Commander Ahsoka Tano, to escape. He later commanded Wookiee forces of the Kachirho Wookiee Militia during the Battle of Kashyyyk alongside the Grand Army of the Republic, led by Jedi General Yoda. During the battle, one of the last ones of the war, Yoda’s clone troopers received Order 66 from Supreme Chancellor Palpatine and, with the help of Chewbacca and his fellow Wookiee Chieftain and General Tarfful, Yoda escaped Kashyyyk and the destruction of the Jedi Order.

In the years that followed, during the rule of the Galactic Empire, Chewbacca was enslaved by the Empire until he was rescued by Corporal Han Solo, becoming his co-pilot aboard the Millennium Falcon during coaxium run for Crimson Dawn with Tobias Beckett and Qi’ra. Winning the Falcon from Landonis Balthazar Calrissian, they later worked in the employ of crime lord Jabba the Hutt until Solo was forced to dump a shipment of spice to avoid trouble with the Empire, at which point a bounty was placed on their heads. Soon thereafter, Chewbacca and Solo were hired by Jedi Master Obi-Wan Kenobi to ferry him, Luke Skywalker, C-3PO, and R2-D2 to Alderaan on a mission vital to the survival of the Alliance to Restore the Republic. After finding Alderaan was destroyed, the group was brought aboard the Death Star, where they helped Princess Leia Organa escape from captivity and return to the Rebel base on Yavin 4. Though Chewbacca and Solo initially chose to leave Yavin 4 and not join the Rebellion, they ended up fighting in the Battle of Yavin and were instrumental in Skywalker’s destruction of the Death Star, a major victory for the Rebellion.

Throughout the war, Chewbacca and Solo fought the Empire in a number of engagements, including an assault on Cymoon 1 and the battle on Vrogas Vas. Along with Princess Organa and C-3PO, they escaped from Echo Base on the planet Hoth after the Empire tracked the Rebel Alliance there. The group sought refuge with Calrissian on Cloud City, but Calrissian betrayed them and turned them over to Darth Vader, the Emperor’s chief enforcer, after his city was threatened. Solo was frozen in carbonite and Calrissian helped the others escape, but they were too late to save the frozen Solo from being taken by Boba Fett to Jabba the Hutt. Chewbacca and Calrissian set off to find Solo and located him in Jabba’s Palace on Tatooine, where Chewbacca and his friends saved Solo and destroyed Jabba. Shortly thereafter, they fought in the Battle of Endor, where Chewbacca helped destroy the shield generator and allowed the Alliance Fleet to destroy the DS-2 Death Star II Mobile Battle Station. The Emperor was killed for the first time aboard the battle station, delivering a crippling blow to the Empire.

After Endor and the rise of the New Republic, Chewbacca and Solo fought to liberate Kashyyyk from the Empire. When the war finally came to a close, Chewbacca returned home to Kashyyyk with his family. After Solo’s son Ben, turned to the dark side and destroyed Skywalker’s new generation of Jedi, Chewbacca reunited with his old friend and the two spent many years as smugglers once more. They lost the Millennium Falcon and ended up smuggling aboard a ship called the Eravana, but they eventually found the Falcon and, with it, stowaways named Rey, Finn, and the droid BB-8. The droid had part of a map that led to the exiled Luke Skywalker, so the group brought the map to the Resistance that opposed the First Order, which had risen from the ashes of the Galactic Empire. Chewbacca soon fought in the assault to destroy Starkiller Base, a devastating First Order superweapon, a conflict in which Solo lost his life at the hands of his son. After the base was destroyed, Chewbacca joined Rey in traveling to the planet Ahch-To on the Falcon, where they found Luke Skywalker. After Solo’s death, Chewbacca often served as the sole pilot of the Falcon, including piloting the ship to aid the Resistance during the Battle of Crait.

Roughly a year after the battle of Crait, Chewbacca was one of the last of the Resistance. Having learned of the mysterious return of the Emperor, Chewbacca and the crew of the Falcon, now including Poe Dameron, traveled to the planets Pasaana and Kijimi to find a clue to how to find where the Emperor was hiding, being reunited with his friend Calrissian in the process. The quest nearly ended in Chewbacca’s death, as Rey, having been revealed to be the Emperor’s granddaughter through his son, lashed out with dark power during a fight with Kylo Ren and destroyed a First Order transport that she had thought Chewbacca had been loaded onto, seemingly killing him.

However, Chewbacca survived and was rescued by the Resistance as they continued the quest. Rey eventually found Exegol during a failed self-exile attempt to protect the galaxy from her becoming a Sith, and led the charge during the battle that ensued later on. Rey ultimately killed her malevolent grandfather with the help of the returned Ben Solo in the climax of the battle, while the Resistance, joined by the Citizens’ Fleet, progressively overpowered the Sith Eternal’s Final Order fleet that the Emperor planned to unleash.

Having destroyed the Sith once and for all, the Resistance reveled in their victory, but also mourned their losses, including Leia, who had died of natural causes shortly after reaching out to her son and helping him turn back towards the light. 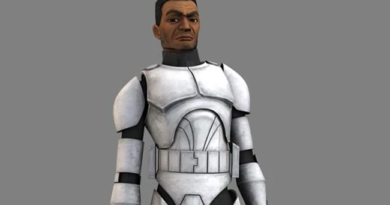 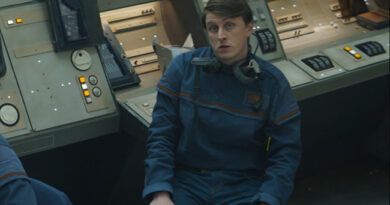 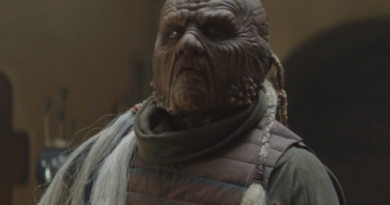 SWRPGGM · 16 hours ago
@swrpggm
Gantika was a Togruta female who served as the elder of a village on the planet Shili who guided her people through good times and bad. She would be the one who recognized Ahsoka Tano's ability to wield the Force.

SWRPGGM · 16 hours ago
@swrpggm
A sabertooth was a creature that lived in the galaxy. At some point, one was encountered by a very young Ahsoka Tano who used the force ability to tame the fearsome creature.

SWRPGGM · 16 hours ago
@swrpggm
Gial Ackbar was a veteran male Mon Calamari soldier and strong revolutionary leader during the Clone Wars, the Galactic Civil War, the cold war, and the war between the Resistance and the First Order.

SWRPGGM · 1 day ago
@swrpggm
The Andor Source Guide is nearing completion. A few more articles to write before we have all of season one captured.