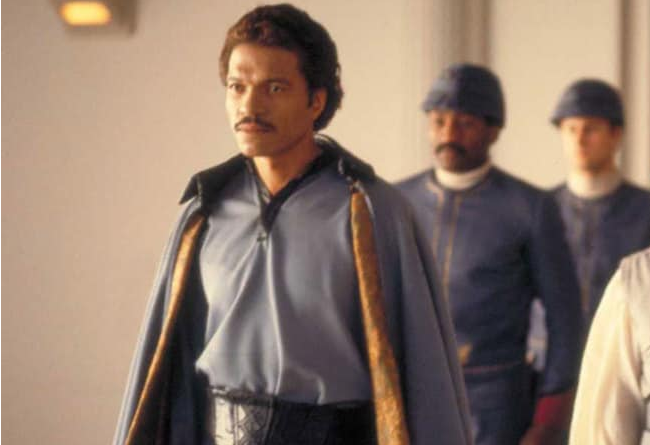 Background: Landonis Balthazar “Lando” Calrissian, was a human male smuggler, gambler, and card player who became Baron Administrator of Cloud City and, later, a general in the Rebel Alliance. Born on Socorro, he was the owner of the Millennium Falcon before losing it to Han Solo in a game of sabacc on Numidian Prime. After losing the Falcon, Calrissian put an end to his days as a smuggler and became an entrepreneur, setting up a small mining operation on the planet Lothal before eventually becoming the leader of Cloud City in the skies of the planet Bespin.

During the Galactic Civil War, Darth Vader arrived on Cloud City in order to lay a trap for his son, Luke Skywalker. As part of the trap, the Dark Lord of the Sith forced Calrissian into tricking a group of Rebels, including Solo and Princess Leia Organa, leading them to Vader himself. Though Vader promised to leave Cloud City without an Imperial presence, Calrissian felt the deal had been altered to the point where he could no longer tolerate it. Calrissian alerted his citizens to the Galactic Empire’s presence and impending occupation, and he ordered an evacuation. He helped the Rebels try to rescue Solo, who had been frozen in carbonite, from Boba Fett, but the bounty hunter escaped.

Calrissian joined the Rebel Alliance and set out to find Solo. After locating him in the palace of Jabba the Hutt on Tatooine, Calrissian aided in his rescue. The Rebels returned to the fleet and Calrissian became a general, volunteering to lead the assault on the DS-2 Death Star II Mobile Battle Station during the Battle of Endor. During the battle, he piloted the Millennium Falcon into the battle station’s core, firing the shot which destroyed it.

In years of peace after of the Empire’s dissolution, Calrissian started a family and fathered a daughter. However, while she was only an infant, his daughter was kidnapped by the First Order. Six years later, he embarked on a quest to the desert planet of Pasaana with Luke Skywalker to find answers about the growing darkness in the Force, but failed to uncover anything. Seeking to bury the pain of those memories, Calrissian settled on Pasaana and led a solitary lifestyle where he was known as the “Hermit” to the native Aki-Aki. He lived alone for some years while keeping contact with the Solo family and was later asked by Organa’s Resistance for his aid in the war against the First Order.

In 35 ABY, Lando helped the Resistance and reunited with his old friend, Chewbacca. Calrissian played one more role in the fight for galactic freedom as he brought an assembled citizens’ fleet to reinforce the Resistance at the battle at Exegol, from which the Resistance emerged victorious.