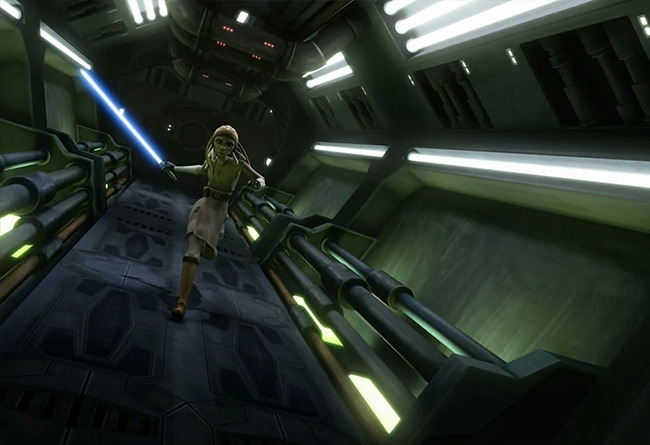 GRIEVOUS INTRIGUE
Diabolical defeat! Though Republic victories
outnumber their losses, the Jedi have been
unable to stop Separatist advances in the
Outer Rim. The ever-elusive General
Grievous stays one step ahead of his
opponents. With thousands of droid armies
at his command, the Jedi can never predict
where Grievous will strike next until now…

Grievous’ destroyer boards Master Eeth Koth’s flagship and Grievous enters the ship with his boarding party, which included commando droids. The attackers kill most of Clone Captain Lock’s clone troopers, but Koth, after ordering his men to the escape pods, manages to defend himself against the commando droids and Grievous. Koth derides Grievous as a coward and murderer, to which Grievous retorts it is not murder to rid the galaxy of filth like the Jedi. Though Koth holds his own for a while, Grievous’s MagnaGuards soon join the battle, and Grievous ultimately subdues Koth.

The Jedi on Coruscant receive a holo-transmission from Grievous, in which the general shows his victory over the Jedi by having one of his MagnaGuards torture Koth. Grievous states that he does not care about the Jedi’s politics, nor their Republic, concluding that he lives only to see them all die. Plo Koon and Clone Commander Wolffe notice a coded message made by Koth’s hand gestures, which is decoded by Obi-Wan, telling them that Grievous’ ship is in the Saleucami system. Obi-Wan Kenobi, Anakin Skywalker and Adi Gallia thus set out to rescue Eeth Koth and to capture Grievous. The ships under Kenobi’s command, including a light cruiser, three frigates and three cruisers, emerge from hyperspace when Grievous is preparing to land on Saleucami, just as Grievous expected. Grievous warns his crew that where there is Kenobi, there is also Skywalker. The Republic engages Grievous’ fleet, and a space battle ensues. Kenobi hails Grievous, leaving Grievous surmising that Kenobi is here to bring him to justice as always. Grievous pulls Kenobi’s cruiser in with a tractor beam, while Anakin, having received updated coordinates, comes out of hyperspace right alongside Grievous’ destroyer, and he, Adi Gallia, Captain Rex and a clone trooper squad break into the ship.

Kenobi’s ship is then boarded by commando droids. Obi-Wan and Commander Cody fight commando droids first, then Kenobi fights the MagnaGuards and eventually Grievous. Grievous tells Obi-Wan that he is aware of Skywalker’s concurrent rescue mission, and finally Grievous and his droids overpower Kenobi. Anakin and Adi locate Koth captured in a containment field, but Grievous’s tactical droid, TV-94, was expecting them and summons commando droids. The tactical droid then sends electric waves through Koth, but the Jedi ultimately destroy the all the droids present and release Koth.

Meanwhile, the fight between Kenobi and Grievous continues, in which Kenobi asks what Grievous gains besides power, a mutilated body, and his place as Count Dooku’s errand boy. Grievous snarls that he’s no errand boy, nor that he’s in this war for Dooku’s politics. As Grievous roars that he is now the leader of the most powerful droid army the galaxy has ever seen, Obi-Wan asks what he intends to gain from being general of an army with no loyalty or spirit. Grievous answers that he hopes to gain a future…a future where there are no more Jedi. Obi-Wan Force-pushes Grievous into the window and gives him a chance to surrender, but Grievous escapes.

Obi-Wan informs Anakin and Adi, the latter of whom goes to intercept him while Anakin carries Koth to his shuttle. Grievous, despite the two ships being attached still, gives orders to fire on the Republic light cruiser’s engines and heads for his own ship. Cody and what’s left of his men try to hold Grievous, but the general subdues them. In the docking tube, Kenobi and Cody catches up to him, but Grievous escapes again. Grievous arrives at his destroyer, but there, Adi Gallia engages him in a brief duel, before the docking tube is torn open, creating a powerful suction. Grievous climbs aboard his ship using his metallic claws, and Gallia extends a cable to Cody and Kenobi, allowing them to get to safety. Anakin then picks up Obi-Wan, Adi and Cody in his shuttle from the destroyer’s hangar.

Grievous and his ship’s infantry droids board a landing ship set for Saleucami, and the Republic light cruiser eventually explodes. Unfortunately, a collision with shrapnel causes the landing ship to lose control and to fall fast towards Saleucami. Obi-Wan then plans to descend onto Saleucami with Rex and Cody to look for Grievous while Anakin cleans up the space battle. When the rescue shuttle reaches the Resolute’s hangar, Eeth is grateful for the rescue despite saying that he would have given his life to bring Grievous to justice. Anakin, however, says that they at least live to fight another day. Adi then takes Koth to a medical frigate, and Obi-Wan prepares his forces for the search on Saleucami. 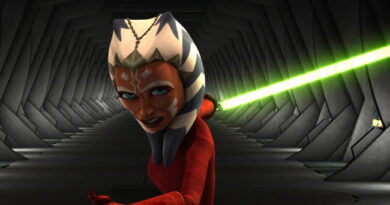 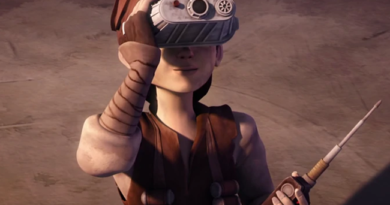 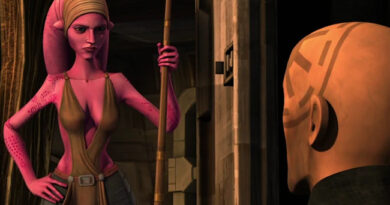 One thought on “The Clone Wars S02E09 Grievous Intrigue”