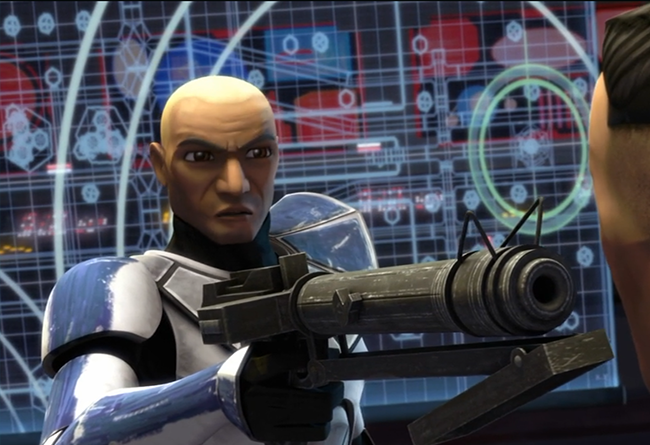 A planet under siege! Separatist forces
mercilessly batter the beautiful and
elegant world of Christophsis. Unable to
defend themselves any longer, the people
of Christophsis call upon the Jedi for
assistance. Hoping to save lives and
prevent further destruction, Obi-Wan
Kenobi and Anakin Skywalker plan a
daring ambush which can turn the tide in
the fight for this crucial star system…

Anakin, Obi-Wan, and their clones prepare to ambush the advancing droid forces from two towers overlooking the road the droids are taking. Just as they are about to fire on the droids, the advances split into three columns and droids suddenly appear in Obi-Wan’s building. Anakin calls in a gunship for immediate evacuation before leading his squad to assist Obi-Wan. They escape to the roof, and the droids follow them. Their gunship arrives, picking them up, but not before taking the command tactical droid’s head to find out how the Separatists discovered their plan.

At the base, Rex and Cody analyze the droid’s memory, but the best they can find before the head burns out is that the Separatists knew of their position beforehand. Obi-Wan suggests that they may have a spy in their ranks. The Jedi decide to go behind enemy lines to investigate and tell the clones to keep the mission classified. However, as the Jedi leave, Cody notices that someone left his comlink on, eavesdropping on them. Rex and Cody spot someone running off and chase him. Unfortunately, they lose him in the mess hall amongst their many brothers, meaning that one of the clones is a traitor. They decide to contact the Jedi, but the droids are keeping the communications jammed.

Rex and Cody have R2-D2 analyze the communication history, to find out if anyone had sent out any unauthorized transmissions. Rex notices an irregular wavelength that is too low and infrequent for them to normally detect. The transmission seems to be coming from Slick’s barracks, so they decide to investigate that end. They question all of Slick’s men: Jester was cleaning his weapon, Punch and Sketch were in the mess hall, and Gus was in the infirmary. The last one, Chopper, appears to be hiding something, and reluctantly reveals that he was collecting droid fingers as war trophies, which is forbidden by protocol. Chopper denies being a spy, and Slick offers a full investigation when the Jedi come back.

However, Chopper snaps that from his hiding place, he saw Slick go into the command center rather than the mess hall, and Cody also notes that Slick somehow knows about the Jedi’s departure. Slick, knowing he’s been discovered, escapes. Cody and Rex try chasing him down, but they are too late: Slick blows up most of the gunships and AT-TEs, as well as the weapons depot, with earlier-placed charges. The other clones inform Cody and Rex that Slick went into the command center, and they order the others to secure the perimeter while they go inside.

In the meantime, as Anakin and Obi-Wan race to the Separatist base on BARC speeders, they notice an increasing number of droids spying on them, but still decide to continue the mission, despite the fact that it has been compromised. They arrive at the enemy base and inside, they meet Asajj Ventress again and begin to duel with her. The Jedi manage to overcome Ventress and demand her surrender, but as they edge closer to capture her, she creates a large hole in the floor beneath their feet with her lightsabers, pushing them one level down. Ventress taunts them and runs away, and the Jedi follow her, discovering that she has set up a whole army to invade Christophsis. The Jedi engage Ventress again, overbalancing the tri-droid she is standing on before escaping on STAPs. Ventress dispatches General Loathsom to take care of the Jedi while she moves on to the next phase of her master’s plan, and she heads to the Trident.

Rex and Cody enter the command center in search of Slick. They soon guess that he is hiding in the vents and inconspicuously act out a scene; Cody leaves his blaster on the table while Rex goes to “secure the lockdown”. Slick comes down from the vents and grabs Cody’s blaster, only to find that it is empty, and Rex comes up from behind him. Slick engages the commander and captain in physical combat, stating that he was tired of all the suffering and was offered freedom and money from Ventress. Cody manages to knock him out and they apprehended him. As they present Slick to the Jedi, Slick snaps that his brothers are enslaved by the Jedi, that he was striking a blow for all clones and that he loves his brothers, but Cody and Rex retort that he has now exposed them all to certain doom.

Cody orders the other clones to take the traitor to lockup. Rex reports that though most of their weapons are trashed, they managed to save the heavy cannons, which will prove to be useful in the coming battle. 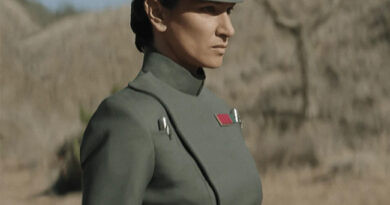 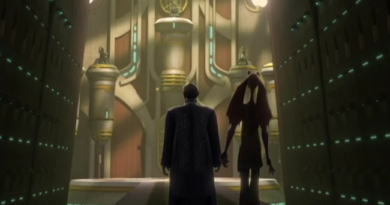 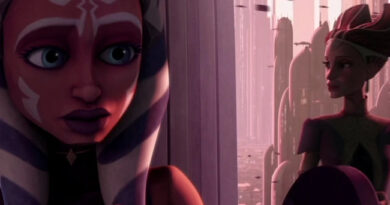