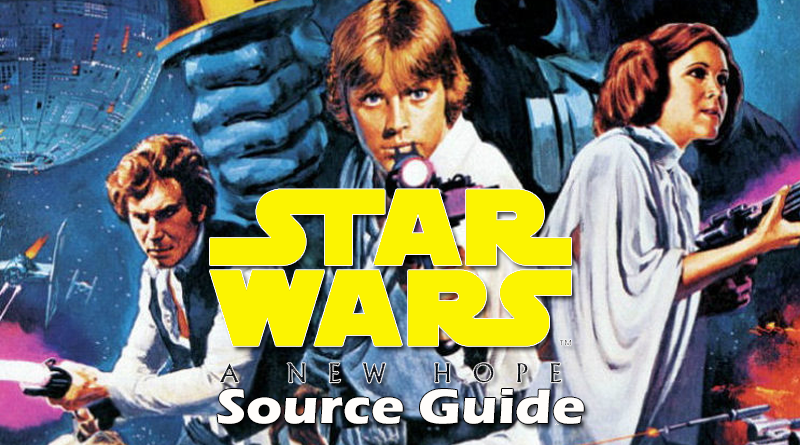 It is a period of civil war.
Rebel spaceships, striking
from a hidden base, have won
their first victory against
the evil Galactic Empire.

During the battle, Rebel
spies managed to steal secret
plans to the Empire’s
ultimate weapon, the DEATH
STAR, an armored space
station with enough power
to destroy an entire planet.

Pursued by the Empire’s
sinister agents, Princess
Leia races home aboard her
starship, custodian of the
stolen plans that can save her
people and restore
freedom to the galaxy….

Nineteen years after the formation of the Galactic Empire, the galaxy is in a state of civil war. The Rebel Alliance has won their first major victory by stealing plans to the Galactic Empire’s secret weapon, the Death Star. Hoping that the stolen plans can save her people and restore freedom to the galaxy, Princess Leia Organa, who is in custody of the stolen plans attempts to race home aboard the Tantive IV. However, her ship is intercepted by the Imperial I-class Star Destroyer Devastator over the desert planet of Tatooine.

Imperial stormtroopers manage to board the ship, and after defeating the small number of guards defending the ship, the Sith Lord Darth Vader arrives to assess the damage. Vader is outraged and questions Captain Antilles, whom he eventually strangles and kills. Hiding on the ship, Princess Leia is spotted by stormtroopers. They shoot her with a stun blast and bring her before Vader. However, before being detained, Leia was able to record a holographic message with the help of R2-D2, and assigned the droid the responsibility of taking the message to a Jedi-in-hiding on Tatooine. Vader orders a message be sent to the Imperial Senate, informing them that the ship was destroyed, with everyone on board killed. R2-D2 and C-3PO use an escape pod in order to escape the ship and reach the planet of Tatooine below.

The droids are bought by moisture farmer Owen Lars and his nephew, Luke Skywalker. R2-D2 escapes from the Lars’ homestead in search of an Obi-Wan Kenobi, whom the droid claims to be the property of. Luke and C-3PO find R2 the next day just before they are attacked by Sand people. Luke and his droids are rescued by Obi-Wan Kenobi or, as Luke knows him, Ben Kenobi. Obi-Wan takes Luke to his home.

Luke receives his father’s lightsaber, as Obi-Wan recalls his own friendship with Luke’s father. Luke is told that a Jedi named Darth Vader betrayed and murdered his father. After discovering Princess Leia’s message carried by R2-D2, Obi-Wan attempts to persuade Luke to accompany him to Alderaan. Luke refuses to go until he discovers that his aunt and uncle were brutally murdered by stormtroopers searching for the droids. Luke, Obi-Wan, and the two droids travel to Mos Eisley to find passage to Alderaan, Princess Leia’s home planet.

For 17,000 credits, 2,000 in advance and 15,000 upon arrival, smuggler Han Solo and his First Mate, a Wookiee named Chewbacca, agree to take the four of them to Alderaan aboard their ship, the Millennium Falcon. After brief scuffles with the Empire and henchmen sent by Jabba the Hutt, the Falcon escapes the Imperial Blockade at Mos Eisley and Han sets a course for Alderaan, unaware that the planet was about to be mercilessly destroyed by the Empire.

In Alderaan’s place, they find what seems to be an asteroid field. The planet was destroyed by the dreaded Death Star, on the orders of Grand Moff Tarkin, to set an example of the power of the Empire. The Millennium Falcon is pulled aboard the Death Star by its powerful tractor beam.

From hidden smuggling compartments, Solo ambushes two stormtroopers of the Imperial scanning crew. With Han and Luke now disguised as the two stormtroopers, the group begins to figure out how to escape. Obi-Wan separates from the group to disable the tractor beam, leaving the others alone. While connected to the Imperial Network, R2-D2 discovers Princess Leia is aboard the station. Luke convinces Han and Chewbacca to rescue her with the vague promise of a grand reward. Han and Chewbacca reluctantly agree. Luke plans to march into Detention Block AA-23, claiming that Chewbacca is part of a prisoner transfer. C-3PO and R2-D2 are instructed to remain behind, and the trio sets off on their rescue attempt. Luke’s plan works flawlessly in that they are quick to subdue the officers and guards in the princess’s cell block. Unfortunately, no one thought to plan for their escape, and Leia takes charge, blasting a hole in a nearby grate and jumping through while Han and Luke hold off a squad of stormtroopers. Chewbacca, Luke and Han all dive after the princess into the unknown.

Unfortunately, the grate covers a chute that leads to a garbage compactor that is also home to a resident dianoga. Soon after landing, the creature pulls Luke under the surface, but releases him and is scared away when the Imperials realize where the heroes escaped to and activate the compactor. As the walls close in on the foursome, Luke desperately calls to C-3PO over his comlink asking for the compactor to be shut down. R2-D2 manages to shut down the compactor just in time, although, amidst the muffled cries of joy over the comlink, C-3PO is briefly convinced that his master and friends have been crushed.

After escaping from the trash compactor, the group hurries back to the Millennium Falcon, hoping that Obi-Wan has successfully shut down the tractor beam. They encounter stormtroopers on their way to the ship, evading and blasting their way past them.

Obi-Wan, on the other hand, was destined to meet with Darth Vader. After a short duel with his former Padawan, Obi-Wan sacrifices himself, thus becoming one with the Force and allowing Luke and the others to escape. Horrified and angered having witnessed Obi-Wan’s demise at the hands of Vader, Luke takes his final blasts at the stormtroopers and dashes onto the Millennium Falcon.

After fighting a squadron of TIE fighters, the Millennium Falcon meets the Rebel Alliance on Yavin 4, and the information in R2-D2 is turned over. General Dodonna plans the attack on the Death Star, an attack so audacious as to receive an unenthusiastic reaction from the pilots. To add to Luke’s dismay, Han leaves after receiving his reward.

The Rebel strike force begins its attack on the Death Star, as the space station approaches the Rebel base on Yavin 4. A group of starfighters assaults a trench on the Death Star’s surface to hit the station’s vulnerable spot before it can destroy the Alliance’s base. During this, most of the Rebel craft, including Luke’s friend Biggs Darklighter, are picked off by Imperial fighters led by Darth Vader. Just as Vader opens fire on Luke from his personal TIE Advanced fighter, Han returns in the Millennium Falcon and attacks the Imperials, resulting in Vader’s ship getting knocked out of the trench. Luke, aided by the voice of Kenobi and guided by the Force, accurately fires two proton torpedoes into a small exhaust port leading to the Death Star’s reactor, and the battle station explodes.

The few remaining ships (those of Wedge Antilles, Luke, Han, and a Y-wing Pilot) return to Yavin 4 and a victory celebration commences, complete with medals for the heroes, Han Solo and Luke Skywalker, presented by Princess Leia.

SWRPGGM · 2 hours ago
@swrpggm
Hey @DisneyPlus why are you preventing me from using your service unless I provide detailed personal information that I have no desire to share with you. This makes me want to #unsubcribe
View on Twitter
0
0

SWRPGGM · 8 hours ago
@swrpggm
Episode titles for #TheBadBatch were released today with the trailer. https://t.co/5sLFypPdTj
View on Twitter