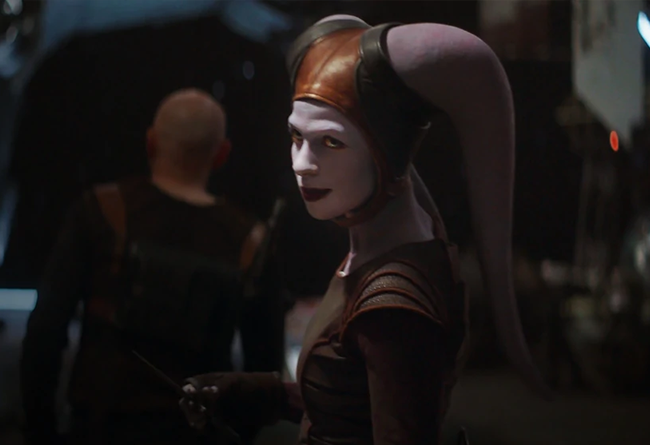 The Razor Crest lands in a space station hangar bay. The Mandalorian is greeted by a bearded man named Ranzar Malk, known as “Ran,” who didn’t expect to see him and is surprised that he reached out to him. Ran is aware of the trouble between the Mandalorian and the Bounty Hunters’ Guild. Ran tells the Mandalorian that he is welcome here any time.

With little choice, Ran introduces him to a bald human male associate named Migs Mayfeld, telling him that the Mandalorian is an old associate who brought them some reputation. When he asks what the “Mando” got out of it, Ran says that he got target practice out of it. The Mandalorian replies that it was a long time ago.

Xi’an asks the Mandalorian why she shouldn’t kill him where he stands. She waves a dagger before trying to flirt with the Mandalorian, whom she had a relationship with in the past. Ran tells the lovebirds to break it up before leaving with the others. Burg sizes up the Mandalorian and derides him, calling him “tiny.”

While checking the Razor Crest’s systems, Zero encounters a garbled hologram transmission from Greef Karga. Briefing the team, Mayfeld tells the group that the package is being moved in a fortified transport ship. They have a limited window to infiltrate the ship and recover the prisoner before it jumps into hyperspace. The Mandalorian points out that this is a New Republic Correctional Transport they are raiding, meaning that their friend was arrested by the authorities. Ran says a job is a job, but the Mandalorian is reluctant to get into trouble with the New Republic. Xi’an tells the Mandalorian that the ship is crewed by droids, appealing to his anti-droid sentiment.

Zero reports that the ship is a mess despite recent qualifications; citing leaking hyperlinks, intermittent navigation, and that the hyperdrive is operating at 67.3% efficiency. He asks why they are not using newer ships. Ran responds that the Razor Crest is off both Imperial and New Republic grids, making it a ghost. Mayfeld adds that they need a ship that can jam New Republic codes. His plan is to board the ship through their blindspot.

The Mandalorian thinks this is not possible, but Mayfeld replies that is why Zero will be the pilot. Ran says that the team needs him on the trigger, rather than the wheel. Zero says that he is quicker and smarter than organics. Ran reassures the Mandalorian is the best. When the Mandalorian asks how he can trust the droid, Ran replies he doesn’t trust anybody. The Mandalorian departs the space station with Ran’s crew aboard the Razor Crest.

In the cargo hold, Xi’an tells Burg to sit down, but he knocks the dagger out of her hand; in retaliation, she hisses at him. In the cockpit, Zero takes the ship into hyperspace and tells the Mandalorian that he will pilot the ship. The Mandalorian obliges and joins the passengers. Meanwhile, Burg manages to open the Mandalorian’s gun cabinet. The Mandalorian confronts Burg for opening his gun cabinet, but Mayfeld calms them down, promising he will never see them again once the job is done.

The Razor Crest exits hyperspace directly above the New Republic prison ship and does a hard turn before landing on top of the ship’s hull. The sharp jerk causes the passengers to trip; the Child falls to the ground and cries. The Mandalorian calms the Child and puts him back in his cot. Xi’an grumbles that Zero did not give them a countdown. Zero announces that the Razor Crest is scrambling the prison ship’s signal and is amazed that the ship survived the Empire without being impounded. The Mandalorian opens a hatch beneath the Razor Crest which allows them to enter the New Republic prison ship.

Mayfeld is the first to go down and avoids several black hovering security droids. He tells Xi’an and Burg that it is safe to come down. He tells Zero to hack into the control room and disable the ship’s surveillance system. The Mandalorian joins Mayfeld’s boarding team. Mayfeld tells them to avoid any contact with security droids. Zero tells them that he has hacked into the surveillance system and will serve as their eyes.

The boarders travel through the corridors of the prison ship, passing several humanoid and alien prisoners. Zero tells them they are approaching the control room and to turn left at the junction. The group encounter a MSE-6 series repair droid, which tries to flee, but Burg shoots it with his blaster, much to Mayfeld’s dismay. The group are attacked by four humanoid New Republic security droids.

The boarders take shelter from the blaster bolts at the edges of the corridor. Mayfeld reveals he has several blaster arms attached to his harness. Mayfeld thinks that the Mandalorian has abandoned them. However, the Mandalorian ambushes the security droids from behind and topples one by slicing its foot. He shoots at another. One of the droids grabs him and hurls him against a cell door. He engages in a fist fight with the droid before breaking free.

The Mandalorian then uses his grappling cable to pull down another droid before ripping off its head. He burns one of the two remaining droids with his flamethrower before shooting off the head of the fourth droid. Mayfeld and his associates watch while the prisoners cheer and shout in alien languages. However, Mayfeld does not thank the Mandalorian and tells him to “clean up his mess.” Zero helps them by redirecting the security alert away from their position.

Approaching the control room, Mayfeld tells Zero to open the door to the room. They are confronted by a blue uniformed New Republic soldier who points his blaster at them and demands that they put down theirs. Mayfeld finds that the prisoner they are rescuing is in Cell 221. The Mandalorian and Mayfeld try to reason with the New Republic soldier, but he pulls out a tracking beacon, which will alert New Republic reinforcements.

Xi’an is upset that Mayfeld concealed this information from her. The Mandalorian speaks to the New Republic soldier, named Davan, telling him they are only here to free a prisoner and not to kill him. Mayfeld disagrees with this, but the Mandalorian warns that killing him will bring New Republic firepower on them.

He demands that the Mandalorian remove the blaster from his face. The Mandalorian refuses and Burg points his blaster at him. Before a standoff can ensue between them, Xi’an lethally strikes Davan with her dagger. However, they realize that the dying OCAS activated the tracking beacon prior to her OCAS. OCAS warns that they have twenty minutes before the New Republic arrives.

They eventually manage to reach the prison cell which Zero unlocks, after warning them they have fifteen minutes remaining. Inside the cell, they find the prisoner, Qin, whom the Mandalorian recognizes. Qin chides the Mandalorian for leaving him behind the last time he saved him. Burg throws the Mandalorian into the cell while Xi’an and Qin embrace, revealing they are siblings. Xi’an tells the imprisoned Mandalorian that he “deserved it.”

Meanwhile, Zero goes through the Razor Crest’s transmissions and learns about the Mandalorian’s troubles with Greef Karga. He tells Mayfeld and his team that they have ten minutes remaining. The Mandalorian traps a humanoid New Republic security droid walking past his cell with his grappling cable. The droid struggles, showering his cell with blaster bolts. He manages to disable the droid and recover one of its arms, using it to unlock the cell.

Zero hears the Child’s voice and sees the Child outside the cockpit; the droid is curious. Qin convinces Mayfeld and and the others to split up into order to kill the Mandalorian and find a way back to the ship. Xi’an demands that Zero give them a path. The droid fetches a blaster to hunt down the Child but he has slipped away. Qin demands that Mayfeld get him off the ship. When Mayfeld asks about leaving his sister behind, Qin ominously responds, “What about her?” before taking a blaster from Mayfeld. The Mandalorian watches Xi’an and Burg from the surveillance cameras. He grabs the tracking beacon.

Qin convinces Mayfeld to hunt down the Mandalorian in return for getting triple what Ran is promising him. Mayfeld agrees, but tells Qin to keep his promises. While Xi’an and Burg hunt for the Mandalorian, Zero searches for the Child in the Razor Crest’s cargo bay. The Child hides among the stored goods.

Xi’an seeks vengeance against the Mandalorian and asks Zero where is he. Zero is preoccupied with hunting down the Child, who is hiding from him. Mayfeld shoots three humanoid security droids. Xi’an fights the Mandalorian with several knives but he manages to grab and subdue her. Mayfeld approaches a blast door and spots a mouse droid which spooks him. The Mandalorian ambushes Mayfeld from behind. Meanwhile, Zero hears a door opening from behind.

After the Mandalorian leaves, Ran activates a lift that brings up a gunship and tasks Qin with killing him. However, Qin finds that the Mandalorian has left the tracking beacon on him, allowing the New Republic to track them down. Three New Republic X-wing starfighters exit hyperspace, narrowly avoiding the Razor Crest. The three pilots, Trapper Wolf, Jib Dodger, and Sash Ketter pick up on the homing beacon and see a gunship being launched. After destroying the gunship, they strafe the space station.

The Mandalorian takes the Razor Crest into hyperspace. The Child sits in the co-pilot seat. The Mandalorian gives him a ball from one of the levers to play with and says he told him it was a bad idea. Meanwhile, a bruised Xi’an, Mayfeld and Burg wake up to find themselves locked inside a prison cell aboard the New Republic prison ship.