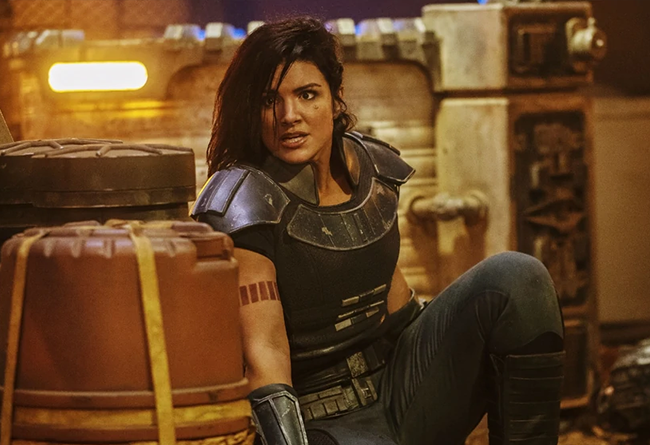 The episode opens on the planet Sorgan with several krill swimming in a body of water. They are harvested by several human villagers with baskets. A woman named Omera watches over her daughter Winta, who is chasing a frog. The frog slips away. Birds flutter overhead. Just then, they hear some movement and roars.

Blaster shots are unleashed on the villagers. Under the hail of blaster fire, Omera rushes for Winta and carries her into a lone. Several Klatooinian raiders charge into the village, looting their supplies and harvest. One even strikes an astromech droid in the head. Omera and her daughter hide under a wooden cage while the raiders march away. Omera hugs Winta as she surveys the carnage left behind.

Meanwhile, the Mandalorian travels through space aboard the Razor Crest. The Child sits near the console and gazes up at space. He fiddles with the control, causing the ship to jerk. The Mandalorian scoops the Child up onto his lap. Studying a holomap, he decides to hide and stay low on Sorgan, a backwater world with no industry, large settlements, or spaceports. He thinks it will be a good place for them to lay low for the next two months like womp rats. He reassures the Child that nobody will find them here.

The Mandalorian brings the Razor Crest down into Sorgan’s atmosphere, flying over the village. Several villagers including Omera watch as the ship descends. After landing, he tells the Child that he will go out and have a look, promising not to take too long. He places the Child on his seat and warns him not to touch anything. He promises to find lodging and come back for him. He tells him to stay here and not to move.

The Mandalorian descends down the gangplank only to find the Child, who can walk, standing beside him. The Mandalorian relents and allows him to come along. They walk along a path.

The two return to the common house. The woman Carasynthia Dune, who is a former Rebel Alliance Shock trooper, talks about her exploits after Endor mopping up ex-Imperial warlords. The New Republic wanted it quiet so they sent in dropships with no support. Then when the ex-Imperials were gone, the politics started. She says that her work became protecting delegates and suppressing riots, not what she had signed up for.

When the Mandalorian asks how she ended up here, she explains that she received an early retirement. She explains that she came at him so hard because she knew he would figure out that there was a bounty on her. After finishing her soup, she warns him that one of them would have to move on first unless they want another round of the fight. She adds she was here first. The Mandalorian tells the Child that it looks like this planet has been taken.

A Plea For Help

Some moths fly over a lamp at night. The lamp is attached to a repulsorlift speeder. Two men move on the repulsorlift speeder towards the Razor Crest. They find the Mandalorian repairing his ship. They speak to the Mandalorian and seek his services as a mercenary. The two of them want to hire him to protect their village against raiders. They explain that their krill harvest was stolen by raiders.

The Mandalorian finds Cara and asks if she is interested in a “round two”, dropping her the bag of coins. While traveling with the human peasants on their speeder, Cara remarks that their job is hunting some raiders for lunch money. The Mandalorian responds that she is caught up in this in the middle of nowhere and that it is a pretty reasonable deal for somebody in her position. Worst case scenario is that they turn up with their blasters. The best case scenario is that they deter them. He says that he can’t imagine anything living in these trees that a shock trooper could not handle.

The Mandalorian is billeted by Omera, who offers her humble lodging. Omera also introduces the Mandalorian to her daughter Winta, explaining that she is startled by strangers. Omera tells Winta that this “nice man” is going to protect them from the “bad ones.” She hugs her daughter who thanks the Mandalorian. They then leave to give their guest some privacy.

While the Mandalorian is settling the Child in a cradle, they are visited by Omera and Winta, who bring them some food. Winta takes an interest in the Child and asks if she can feed him. The Mandalorian allows her to feed him. She also gets his permission to play with the Child. Omera also tells the Mandalorian that she has brought him some food since he hasn’t eaten outside.

In private, Omera asks the Mandalorian when was the last time he removed his helmet. He says yesterday. When she asks when he last did it in front of someone else, he replies that it was when he wasn’t much older than the children. Omera is surprised that he hasn’t shown his face to anyone since he was a kid. The Mandalorian replies that he was grateful that the Mandalorians took him in because his parents were killed. Omera feels sorry for the Mandalorian. She tells him to let her know if there is anything he needs before leaving.

The Mandalorian and Cara then return to the village. The Mandalorian begins by telling the villagers that they “can’t live here anymore.” Cara then takes over, apologizing that it was not the news they wanted to hear, but that there were no other options. When two of the farmers remind them of their job, Cara responds by saying that it was “before they knew about the Imperial walker.”

Cara then says that Sorgan is a big planet and suggests moving somewhere else. One of the farmers responds by saying that his grandfather seeded the ponds, and his companion adds that it took them generations to build this village. The Mandalorian points out that the farmers are not fighters, but the farmers beg for a chance.

Dune responds that she has seen AT-ST walkers take out entire companies of soldiers within minutes. When Omera restates that they are not leaving, Cara says that they cannot fight “that thing,” but the Mandalorian says that they will be able to if he and Dune “show them how.”

Later that evening, the Mandalorian chats with Omera, telling her that it is dusk and that they will be leaving soon. She promises to be ready when they return. That night, the Mandalorian and Cara infiltrate the Klatooinian wikiup. Cara takes out a sentry. The two venture deeper into the outpost, passing several Klatooinians sitting by a campfire. They head inside a tent and find several circular tanks. Cara plants detonators.

Several Klatooinians enter the tent and engage in a fist fight with the infiltrators. More Klatooinians enter and the fist fight continues. Cara shoves one of them into a blue tank as the detonators flash. More enter with blasters. The Mandalorian covers Cara while she flees out an exit. The two escape before the tent explodes into flames.

Cara says that she hoped the plan works as the AT-ST Raider comes to life, glowing red shining through its viewports. The two flee through the woods as the Imperial walker rains down laser fire upon them, burning several shrubs. The villagers take up position at the barricades with guns while the children hide with the Child in a barn.

Battle for the Village

The Mandalorian and Cara soon return and tell the villagers that once that thing goes in the pond, it is going down. The AT-ST Raider advances on the village. However, the walker stops short of the pit trap and deploys a powerful beam light, scanning the barricades. The walker bombs a house but Cara orders the villagers to hold their positions.

Klatooinian raiders charge through the fields and the villagers open fire on them. The Mandalorian and Cara realize that they can’t get the walker to step forward. Cara decides to lure the AT-ST walker into the trap and wades through a pond with the Mandalorian’s Amban Rifle. She fires potshots at the walker to provoke the drivers.

Omera says that it is now or never and the villagers surge forth, attacking the raiders. Cara exchanges fire with the AT-ST, firing blaster bolts through its viewports. The Mandalorian hopes the walker takes the bait. Provoked by Cara, the walker charges into the pit only to sink into the pond. The Mandalorian charges with a thermal detonator and plunges it through the walker’s chassis, blowing it up. Deprived of their mech support, the surviving Klatooinian raiders flee into the wood. Omera smiles while the villagers cheer. Inside the pond, the Mandalorian asks Cara if this was the plan and she says “something like that.”

Several weeks later, peace has returned to the village. The Child swallows a Sorgan frog whole while the children watch but spits it out. Meanwhile, Omera brings Cara a drink and invites the Mandalorian into the house. The Mandalorian declines her invitation. Omera observes that the Child is very happy here since the children have taken a liking to him. The Mandalorian agrees.

When Cara asks if the Mandalorians would kill him for taking off his helmet, he explains that he can never put it on again if he takes it off in public. Cara suggests that the Mandalorian take off his helmet, marry the beautiful young widow and raise his kids sipping spotchka. The Mandalorian says that they raised some hell a few weeks back and that it is too much action for a backwater world. He warns that word travels fast and that it would be a better idea to move on. Cara says that he wouldn’t want to be the one to tell him.

The Mandalorian suggests leaving the Child here because traveling rough is no life for a kid. He believes he did his job and given the kid a better chance at life. Cara thinks that leaving would break the Child’s heart. The Mandalorian responds that Child will get over it because they all do.

Meanwhile, a Kubaz bounty hunter with a tracking fob walks through the forest towards the village. The Mandalorian goes to Omera and asks if he can have a word with her. He tells her that it is very nice and that the Child is clearly happy here. Omera asks if he is happy here and adds that they want the Mandalorian to stay. She says that the community is grateful and that he can pack his armor away if there is any trouble. She suggests that he and his boy could have a good life and that the Child could have a childhood for a while.

The Mandalorian says that he would and lets Omera hold his armor. The Kubaz bounty hunter aims his blaster trigger at the back of the Mandalorian’s helmet. The Mandalorian gently pulls down her hands and says that he doesn’t belong here but adds that the Child does. Omera says she understands and promises to look after the Child as if he were her own.

SWRPGGM · 4 hours ago
@swrpggm
Hey @DisneyPlus why are you preventing me from using your service unless I provide detailed personal information that I have no desire to share with you. This makes me want to #unsubcribe
View on Twitter
0
0

SWRPGGM · 10 hours ago
@swrpggm
Episode titles for #TheBadBatch were released today with the trailer. https://t.co/5sLFypPdTj
View on Twitter