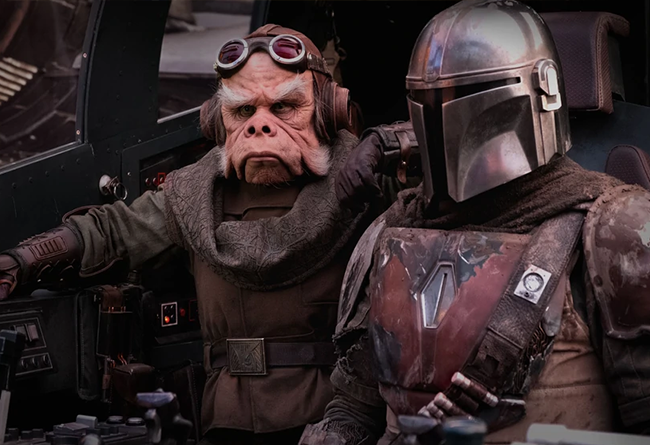 The episode opens with a shot of a lizard scurrying in the sand. The Mandalorian walks by with the Child in a floating cradle. Several lizards scurry past the rocks and on the ground. The Mandalorian looks around and draws the blaster in his hilt.

Just then, he is ambushed by several armed Trandoshans, who wield vibro-axes. The Mandalorian fights back with his trident and subdues them. One of the assailants tries to kill the Child and the Mandalorian shoots him down. The Mandalorian sees a tracking fob on the ground.

Trouble with the Jawas

Dodging debris, the Mandalorian uses a grappling cable to reach the top of the sandcrawler. Jawas hurl debris at him and he dodges them. As he reaches the top, the Jawas dislodge the platform that he had tied the grappling cable around. However, the Mandalorian manages to cling onto the sandcrawler and throws a Jawa off the vehicle. When he reaches the top, he is confronted by several armed Jawas who shoot him with an ion blaster, causing him to fall to the ground.

Later, the Mandalorian wakes up to find the Child in his cradle nearby. The Mandalorian and Child return to the Razor Crest, which has been stripped of cables and parts. He tries to power the ship but the Jawas have stripped it bare, stranding the two of them on Arvala-7.

Camp of the Jawas

The two travel through the night with Kuiil riding a blurrg that draws a hoversled carrying the Mandalorian and the Child. The three approach the Jawa clan the following morning. The Jawas welcome Kuiil, who speaks their language, but takes affront to the Mandalorian’s presence. When Kuiil notices the Jawas’ hostility towards the Mandalorian, the latter admits to disintegrating several of them.

Quest for the Egg

Back at the sandcrawler, Kuiil tells the impatient Jawas to wait a little longer. The Jawas ignore him and retract their sandcrawler, preparing to departing. Just then, the Mandalorian and the Child return with the mudhorn’s egg, Kuiil is pleased that his friends survived. The Jawas are excited and rush to receive the Egg from the Mandalorian. The Jawa chieftain slices the top off the egg with his knife. The Jawas feast on the egg yolk while the Mandalorian looks away.

The Mandalorian thinks that it would take him days to fix the Razor Crest without a proper maintenance facility. Kuiil helps the Mandalorian to repair the ship, saying there is much work to do. Working together, they manage to repair and restore the ship’s systems and parts.

The Mandalorian heads to the cockpit with the Child. He fires up the Razor Crest’s engines. Watching from outside, Kuiil waves goodbye as the Mandalorian’s ship flies off into the sky above and then space. The Mandalorian watches over the sleeping Child in silence during the flight. The Child begins to stir in its cradle and cries.